Natural hazards have the potential to impact a majority of Americans every year.  USGS science provides part of the foundation for emergency preparedness whenever and wherever disaster strikes.

The USGS works with many partners to monitor, assess and conduct research on a wide range of natural hazards. USGS science provides policymakers, emergency managers and the public the understanding needed to enhance family and community preparedness, response and resilience.

By identifying potential hazard scenarios and using USGS hazards science, federal, state, and local agencies can mitigate risk. For example, USGS science can be combined with population data to inform evacuation routes; with local building and land-use codes to reduce impacts to critical facilities; and with emergency preparedness plans to ensure appropriate steps are taken before, during, and after an event. In addition, USGS science can inform planning for major infrastructure investments – such as dams and reservoirs – and to strengthen private-property standards and materials, which help make homes and communities more resilient to natural hazards. The annual National Preparedness Month is a perfect time to consider how you can keep your family safe from all types of natural hazards.

Earthquake hazards are a national concern, with nearly half of Americans living in areas prone to potentially damaging earthquakes. The USGS provides information and tools to reduce earthquake losses across the Nation. These include hazard assessments, earthquake scenarios such as the annual ShakeOut events and the HayWired scenario, comprehensive real-time earthquake monitoring and public-preparedness handbooks.

Now, imagine if fire stations could be warned to open the firehouse doors before damaging seismic waves of an earthquake arrive and jam them shut; just a few moments of advance notice can make all the difference. Likewise, if trains could be slowed or stopped; if water and other utilities could be shut down; and if people could have additional time to "drop, cover and hold on," saving lives.

The USGS and its partners are making that a reality by building an Earthquake Early Warning System for the West Coast of the United States called “ShakeAlert,” which began providing public alerts in California in fall 2019, and has already distributed alerts for eight potentially damaging (magnitude 5 and above) earthquakes over the past year via the Wireless Emergency Alert System.

Parts of the United States have experienced some significant earthquake activity in 2020.  In January 2020, a magnitude 6.4 (M6.4) earthquake in Southwest Puerto Rico occurred as part of a sequence of events that included more than a dozen magnitude 5 and above earthquakes, and more than 1,500 magnitude 3 and above events, potentially large enough to be felt locally.

USGS earthquake scientists worked closely with its Advanced National Seismic System partners at the Puerto Rico Seismic Network to deploy instruments to better monitor the aftershock sequence. Together, they generated an aftershock forecast to provide information on the evolving likelihood of both aftershocks and larger events, and published an aftershock duration report to support FEMA in their emergency-management response to the earthquake sequence.

The Puerto Rico earthquake appeared to involve multiple faults both onshore and offshore that form a complex pattern. The earthquake sequence caused damage to numerous structures in southern Puerto Rico, including destruction of several buildings and damage to the main powerplant that resulted in intermittent power outages across parts of the island. USGS geologists examined ground failure (landslides, liquefaction, and cracking) near the epicenter of the earthquake to calibrate the reliability of a USGS ground-failure science.

Since March 2020, there have been a number of significant earthquakes across the Intermountain West region of the United States. The USGS has worked closely with state and local partners to understand and document these earthquakes, despite the ongoing COVID-19 pandemic. USGS activities include providing seismic instrumentation, tasking of satellites and analyzing satellite imagery, and deploying scientists to collect ephemeral field and seismic data. A summary of the events is provided below:

Tsunami events in the United States are relatively rare compared to the rest of the world, but that does not mean the potential risk is low or should be ignored. Many U.S. coastal communities are threatened by tsunamis, and recent disasters elsewhere in the world have demonstrated how destructive these waves can be. Tsunami waves can arrive within minutes when created by a local source or within hours when created by distant earthquakes across ocean basins.

The USGS tsunami and tsunami hazards research supports local and state emergency managers in their efforts to prepare communities and reduce the potential impacts of future tsunamis by studying how and where tsunamis could form, the frequency and size of past tsunamis, and how coastal communities may be vulnerable to tsunami hazards. The USGS studies recent, historic, and prehistoric tsunamis to better understand impacts, processes, and causes. Field investigations focusing on sediment left by tsunamis document where and when tsunamis have impacted U.S. coastlines in the past. The USGS also studies how earthquakes, landslides and volcanic eruptions generate tsunamis to understand all potential causes and to identify tsunami hazard zones.

The USGS also studies how coastal communities are vulnerable to tsunami hazards by evaluating the number and type of people or businesses in tsunami hazard zones, as well as likely evacuation times for each of these coastal communities. USGS vulnerability studies support local, state, and regional efforts to minimize loss of life from local tsunamis by understanding how communities are threatened, estimating what type of intervention could be most effective in saving lives, identifying where new evacuation structures (e.g., a building, a town, etc.) may be most needed, improving communications about local evacuation routes, and understanding future vulnerability to tsunamis.

USGS vulnerability studies also support distant tsunami evacuation planning by identifying ways to minimize potential traffic issues and characterizing the trade-offs of various evacuation policies. The USGS has developed free software to help coastal planners do their own pedestrian evacuation modeling for tsunami threats. All of these studies and tools provide officials with the ability to develop outreach, preparedness, and evacuation plans that are tailored to local conditions and address both local and distant tsunami threats. 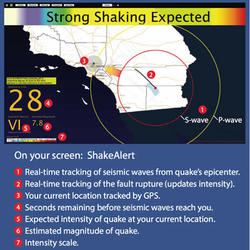 Earthquake early warning (EEW) systems use earthquake science and the technology of monitoring systems to alert devices and people when shaking waves generated by an earthquake are expected to arrive at their location. The seconds to minutes of advance warning can allow people and systems to take actions to protect life and property from destructive shaking.
By
Natural Hazards, Earthquake Hazards
link
March 6, 2019

Earthquake early warning (EEW) systems use earthquake science and the technology of monitoring systems to alert devices and people when shaking waves generated by an earthquake are expected to arrive at their location. The seconds to minutes of advance warning can allow people and systems to take actions to protect life and property from destructive shaking.
Learn More