During both interviews, Dr. Yackel Adams shared information on where tegus are currently found in the U.S. and where they’ll likely spread, as well as what impact tegus may have on their surrounding ecosystems.

The black and white tegu, native to South America, has been documented as living and breeding in three counties in Florida for the last decade. However, the lizards have recently been spotted and removed in South Carolina and Georgia. Tegus present a unique challenge to researchers and managers, due to their unusual resilience. These voracious omnivores can withstand cold temperatures and extensive hunting pressure in South America. Tegu diet includes fruits, vegetables, small animals, and the eggs of many species. Species that are at high risk are those with threatened status such as gopher turtles and Eastern indigo snakes.

While tegus are having a moment in the spotlight, they’ve been a species of interest at USGS for more than a decade. Collaborative tegu research conducted by USGS, National Park Service, and University of Florida focuses on understanding the species to create effective management plans. In 2018, Fort Collins Science Center (FORT) scientists used species distribution models to predict suitable habitats in the U.S. (Jarnevich et al. 2018). These models suggest that much of the southern United States and northern México contain suitable habitat for tegus. So far, FORT scientists and partners, including Georgia Southern University and Georgia Department of Natural Resources, have also documented an incipient population of tegus in Georgia (Haro et al. 2020).

In addition to understanding where tegus may find suitable habitat, ecologists at the Fort Collins Science Center have contributed to research on tegu behavior and movement. Brumation, or reptile hibernation, is a largely unstudied area of tegu behavioral ecology. Three FORT-based studies have monitored brumation of black and white tegus in southern Florida (McEachern et al. 2015, Currylow et al., accepted at Ecosphere pending minor revisions) and Alabama (Goetz et al., in press at PLOS ONE). A FORT-based 2015 study by Klug et al. documented the use of tree and shrub habitat preferences and activity ranges that varied from 3.8 to 58.6 hectares. These studies provide a basis for future research, and could aid in management and control plans.

Read Dr. Yackel Adams’ interview in National Geographic at “This dog-size lizard is spreading through the southeastern U.S."

Listen to Dr. Yackel Adams on Here & Now at “Invasive Tegu Lizards Are Eating Their Way Through Southeastern US.” 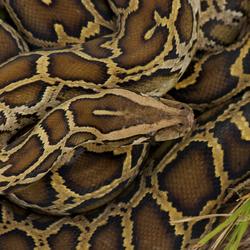 Invasive species are considered to be second only to habitat degradation in terms of negative impacts on the Earth’s ecosystems, and our scientists make up a significant proportion of the global expertise in the rapidly-growing problem of invasive reptiles.
By
Ecosystems, Invasive Species Program, Fort Collins Science Center
link
December 4, 2016

Invasive species are considered to be second only to habitat degradation in terms of negative impacts on the Earth’s ecosystems, and our scientists make up a significant proportion of the global expertise in the rapidly-growing problem of invasive reptiles.
Learn More
July 5, 2018

Invasive reptilian predators can have substantial impacts on native species and ecosystems. Tegu lizards are widely distributed in South America east of the Andes, and are popular in the international live animal trade. Two species are established in Florida (U.S.A.) - Salvator merianae (Argentine black and white tegu) and Tupinambis teguixin sensu lato (gold tegu) – and a third has been recorded
By
Ecosystems, Fort Collins Science Center
January 30, 2015

The influence of disturbed habitat on the spatial ecology of Argentine black and white tegu (Tupinambis merianae), a recent invader in the Everglades ecosystem (Florida, USA)

The threat of invasive species is often intensified in disturbed habitat. To optimize control programs, it is necessary to understand how degraded habitat influences the behavior of invasive species. We conducted a radio telemetry study to characterize movement and habitat use of introduced male Argentine black and white tegus (Tupinambis merianae) in the Everglades of southern Florida from May to
By
Ecosystems, Fort Collins Science Center