Australia’s historic fires, the Black Summer fires, raged from September 2019 into February of 2020, and weren’t fully extinguished until this past March.

The numbers reported by the media on the impact in the Land Down Under were staggering:  5,900 buildings, including 2,779 homes, were destroyed; 34 people died; an estimated 1 billion animals were killed, driving some endangered species to the brink of extinction.

Simon Oliver, the National Earth and Marine Observations Director of Operations and Production for Geoscience Australia (GA), which is Australia's pre-eminent public sector geoscience organization, recently visited with the Eyes on Earth podcast crew at the Earth Resources Observation and Science (EROS) Center about those devastating fires, and how remote-sensing capabilities like Landsat proved useful during and after that disaster.

As it turns out, Geoscience Australia has enjoyed a 40-plus-year partnership with the U.S. Geological Survey (USGS), providing vital ground station services as part of the USGS’ global Landsat International Cooperator Network, says Steve Labahn, the Landsat International Ground Station Network Manager for the USGS. Having that ground station at Alice Springs, Australia, “enabled data acquisition and product generation in near real time over Australia, which greatly assisted in the response to natural disasters, such as these fires,” Labahn said.

Here are a few excerpts from that podcast conversation with Mr. Oliver.

Give us a perspective on the magnitude of these fires, at least as they compare to previous wildfires in your country.

“Australia’s worst bushfire on record, at least in terms of loss of life, occurred on the 7th of February in 2009 in the state of Victoria in the country’s southeast. This fire is commonly referred to as the Black Saturday bushfire, and it claimed 173 lives compared to the 34 lives lost in the recent fires. Black Saturday also destroyed around 2,000 homes compared to the 2,800 homes in the most recent fires. The 2009 fires burnt through around half a million hectares of country. In comparison, the recent fires burnt through 18.6 million hectares—so around 40 times more than in 2009. The Bushfires Royal Commission, which the government set up in the aftermath of the Black Saturday fires, determined a total cost of around $4.4 billion for that event. Estimates of costs from the most recent fires are expected to exceed that number.”

The impact on wildlife this time around seems incredible.

How do satellites help to measure the tons of carbon dioxide that were emitted into the atmosphere during these most recent fires?

“Australia uses satellite data for carbon accounting using a quite advanced ecosystem model known as FullCAM, or the Full Carbon Accounting Model, which has been fully calibrated for Australian conditions. That model is capable of estimating greenhouse gas emissions from land use changes, in a spatially explicit manner. It’s capable of modeling forest disturbance events such as harvesting, prescribed burning or wildfires. The model requires inputs from quite a few spatial datasets, but most important in this is the land cover change data derived from the Landsat time series data from 1972 onwards. Along with burnt area data derived from other satellites, and ground calibration data, this information informs the model to estimate greenhouse gas emissions from wildfires.”

How else were data from Landsat and other Earth-observing systems used in monitoring, measuring, and otherwise informing decision makers during these fires?

“Well, in the lead-up to the fires, Earth observing system data, among other things, fed into modeling of fire risk by underpinning indicators such as fuel moisture. (They) contributed to weather observation and forecasts, into mapping of land use and cover, in assessing water quality and availability, as well as to inform on the location of infrastructure. During the emergency response phase, Earth observation data contributed to an understanding of where active fires were burning, and the weather forecast. And in the post-fire phase, towards assessing the impact of the fires through its role in enabling the mapping of burn extent, for which Landsat has been used to great effect in the past. (Remotely sensed data) was used in assessing burn severity, and in monitoring the availability and quality of water, which can be impacted by ash and debris runoff into water reservoirs following a fire, for example, as well as in monitoring air quality and the environmental recovery more generally.”

The data was useful during the active burning as well?

“Geoscience Australia operates the Digital Earth Australia (DEA) Hotspots application, which provides timely information about hotspots to emergency service managers across Australia. The Hotspot system uses satellite sensor data that’s collected by Australia’s network of ground receiving stations, downlinking the majority of this data from U.S. satellites, as well as other sources of data such as those provided by Japanese weather satellites. That data is used to detect areas producing high levels of infrared radiation ... and we call these Hotspots. This information then allows users to identify potential fire locations, which pose a possible risk to communities and property. The Hotspots information updates multiple times a day and is typically available to users within 30 minutes of the satellite overpass.”

And was Landsat in particular helpful?

“Geoscience Australia also has automated routines that pull down the Real Time Landsat data product from EROS and makes that available to emergency services. This helps complement other Near Real Time products like Digital Earth Australia’s Sentinel-2 Analysis Ready Data, in which Geoscience Australia value adds to the satellite data provided by Europe. We also feed that data into web map services that help provide some context to the information available in the Hotspots service.”

How will Landsat and other Earth-observing systems be used to help Australia recover from this disaster?

“Landsat, in particular, is an invaluable resource to enable our understanding of vegetation dynamics and the environment in general in Australia, and we make use of the long-term archive to measure the current state, compare with earlier years, and then track recovery into the future. We use a number of products created by Australian universities in this way, especially to monitor changes in land cover and vegetation canopy cover. These will be essential going forward, to be able to understand the impact of the fires and then monitor the recovery of the environment.” 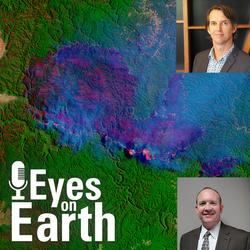 Eyes on Earth is a podcast on remote sensing, Earth observation, land change and science, brought to you by the USGS Earth Resources Observation and Science (EROS) Center. In this episode, we hear from an Australian remote sensing scientist on the role of satellites during a recent outbreak of wildfires.

Eyes on Earth is a podcast on remote sensing, Earth observation, land change and science, brought to you by the USGS Earth Resources Observation and Science (EROS) Center. In this episode, we hear from an Australian remote sensing scientist on the role of satellites during a recent outbreak of wildfires.