Welcome to the “Winter 2016” version of the IN-KY Newsletter. I use this format two to four times a year to highlight USGS activities and water-related science going on at the Indiana-Kentucky Water Science Center. I also take advantage of this opportunity to highlight some of our amazing scientists that work for the USGS.

The Indiana-Kentucky Water Science Center appreciates your continued interest, dedication, and support. With the support of our federal, state and local partners, we will continue to deliver on our promise of providing timely and accurate water information to meet the needs of the Nation, especially those in Indiana and Kentucky.

The Indiana–Kentucky Water Science Center (IN-KY) held two highly successful Cooperator’s Meetings on October 5th in Indianapolis and October 6th in Louisville. In total, over 100 cooperators attended presentations focusing on IN-KY’s science capabilities and future program outlook. In addition to cooperators, Congressional staffers from 4 offices attended to learn more about the science USGS does to serve the people of our Nation.

A few of the meeting highlights included: the IN-KY Hydrologic Networks, a new U.S. Forest Service Partnership, a better Understanding of Climate Change and Soil Moisture, Monitoring Edge of Fields, Expanding our U.S. Army Corps of Engineers Partnership, A Columbus Storm Warning System, Scour Modeling of the I-64 Bridge, Nutrient and Algal Relations in Lakes, Growing our Super Gage Program, the Sparrow Toolbox, and highlighting USGS Specialized and Innovative Technologies such as Multibeam Bathymetry and Terrestrial LiDAR, the AUV EcoMapper, the Augmented Reality Sand Box, the LISST Technology and UAS Drone technology.

How and where Americans use water has changed with our population growth and many technological, environmental, and regulatory drivers. Every 5 years since 1950, the USGS has compiled and estimated water-use information in cooperation with state, federal, and local agencies to document how the Nation's water resources are used. This information is essential to accurately understand how future water demands will be met while maintaining adequate water quality and quantities for human and ecosystem needs.

A cool new tool to help visualize Indiana and Kentucky water-use information has been developed. The USGS Water Availability and Use Science Program have developed water use data visualization (https://owi.usgs.gov/vizlab/water-use/) that highlights our data from 1950 to 2010. The visualization will help people see how much and where we use water across the Nation.

Estimated  use  of  water  in  the  United  States,  various  years: https://water.usgs.gov/watuse/50years.html.

The US Geological Survey, Indiana-Kentucky Water Science Center (IN-KY WSC) is committed to pursuing new and innovative technologies while becoming a center of excellence for advanced methods of data collection. The new IN-KY WSC Unmanned Aircraft System (UAS) is at the forefront of these technological advances. The use of UAS technology within the Department of Interior is quickly becoming a more viable method of data collection and the local IN-KY WSC UAS Program works closely with the USGS National UAS Project Office, as well as the Office of Aviation Services (OAS) within the Department of Interior.

The 3DR Solo quadcopter™ is a versatile system allowing for easy setup and quick launch. This platform currently comes equipped with a GoPro Hero 4 ™ for video-data collection. The USGS also has mounts available which allow the use of traditional point-and-shoot cameras for orthoimagery as well as multi-spectral cameras for more advanced mapping options. A FLIR camera option is coming soon allowing data collection to assess thermal variation within systems. On average, the 3DR Solo ™  can cover between 300-500 acres per day, while flying at approximately 300-400 feet above ground level.

Some common applications include:

Digital flood inundation maps for a 17-mile reach of Licking River and 4-mile reach of South Fork Licking River near Falmouth, Kentucky, were created by the U.S. Geological Survey, Indiana-Kentucky Water Science Center (USGS) in cooperation with Pendleton County and the U.S. Army Corps of Engineers– Louisville District. The inundation maps depict estimates of the areal extent and depth of flooding corresponding to selected water levels (stages) at the USGS streamgage on the Licking River at Catawba, KY(03253500) and the USGS streamgage on the South Fork Licking River at Hayes, KY (03253000). The calibrated model was used to calculate 60 water- surface profiles for a sequence of flood stages, at 2- foot intervals, referenced to the streamgage datum and ranging from an elevation near bank-full to the elevation associated with a major flood that occurred in the region in 1997. The availability of these flood- inundation maps for the Falmouth community along with online information regarding current stages from the USGS streamgages and forecasted stages from the NWS provides emergency-management personnel and local residents with information that is critical for flood-response activities such as evacuations, road closures, and post-flood recovery efforts.

RVR Meander—This is a simplified 2-D river meander model that can predict future centerline migration. It was calibrated to historic river centerlines, and it models bank erosion with a physically-based method based on soil properties.

SRH-2D—This is a two-dimensional hyraulic model that solves for a variety of hydraulic parameters (velocity, water depth, shear stress) in the channel and floodplain. The underlying surface was based on a digital elevation model (DEM) created from lidar and in-channel bathymetry. The results were also used to create flood-inundation maps for the area.

This site was also selected for an ongoing bridge scour countermeasure project that the USGS is working on in partnership with the Federal Highway Administration (FHWA). High-resolution bathymetry and terrestrial lidar were collected in May 2016.

Kathy Fowler is a Hydrologist with the IN-KY Water Science Center, works out of the Indianapolis office and is part of the Specialized Water Modeling and Applied Technology Unit. 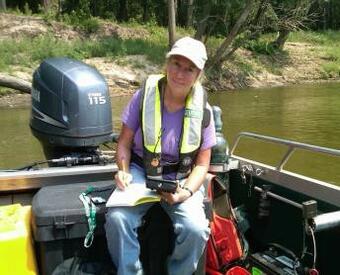 Kathy’s first major work experience was in the oil fields of Texas and Louisiana as a mud-logging geologist. Kathy has been with the USGS since 1980. She began her career as a Hydrologic Technician then joined the Upward Mobility Program to become a Hydrologist. Kathy has experience in both groundwater and surface-water hydrology; she has created GIS databases for military bases within Indiana and has applied GIS techniques to classify hydrogeologic data for use in the groundwater model, MODFLOW. Kathy led projects to compile hydrogeologic and water-quality data for the St. Joseph Aquifer System and sediment transport along Juday Creek. For Indiana’s Source Water Assessment, Kathy surveyed and described intakes at most of Indiana’s surface-water suppliers. She has participated in mercury studies in litterfall, precipitation, and streams. 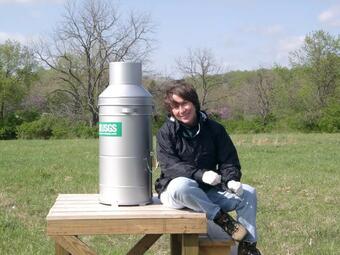 Her most recent work has involved flood-inundation mapping, low-flow characteristics estimation, and regional regression analysis for low-flow estimation at ungaged sites.
She is Project Chief for a Wetland Extent study with NRCS. She is an active member in Indiana Water Resources Association and is a Licensed Professional Geologist.

Tim Lathrop  joined the IN-KY WSC in October of 2001, as a Hydrologic Technician collecting water-quality data for the National Water-Quality Assessment (NAWQA) program’s White River Study Unit. He quickly became the Field Team Lead for NAWQA water-quality sampling in the Indianapolis office, which he continued to do through 2013. During this time, he expanded his knowledge and abilities in order to run a regular field trip to collect surface water flow measurements at stream- gage sites. 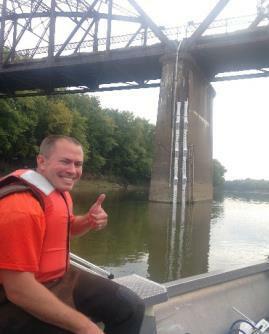 Early in his USGS career, Tim converted to a Hydrologist and was the key water-quality Field Team Lead for the Agricultural Contaminant Transport, Nutrient Enrichment Effects, and Drinking Water Assessment studies between 2003 and 2007. He has been a pioneer in the Indianapolis office by being the first to install and maintain continuous water-quality equipment at several NAWQA stream sites and being the first to develop suspended sediment surrogate models in the IN-KY WSC. This pioneering work led to the development of multiple water-quality monitoring sites in Indiana, now called  “Super Gages.” He has additionally authored multiple fact sheets and reports.

Tim is the Project Chief for the Indianapolis office “Super -Gage” program and oversees the installation, operation, management, and data collection for a network of ten water quality or Super Gages that collect data on parameters such as temperature, specific conductance, dissolved oxygen, pH, turbidity, nitrate, and orthophosphate. Tim uses these data in the development of suspended-sediment surrogate models that relate continuously-measured turbidity to suspended-sediment concentrations, which  then  can be used in load estimates. He is also in the process of developing nutrient surrogate models that relate dissolved nutrients to total nutrient concentrations. Tim loves to talk about the Indianapolis Super Gage program and has given more than a dozen talks a year about the program and the data.

In his spare time, Tim spends quality time with his adorable family, his wife Cara and two daughters, Ayla (9) and Alexis (7).

Luis Garcia started his career with the U.S. Geological Survey after receiving his graduate degree in Natural Resources from the University of Illinois. Before this he taught high-school biology and chemistry for 5 years in St. Louis and Chicago.

While working towards his Bachelor of Science in Biology and then his Master’s Degree in Natural Resources, he had great internship opportunities that included working on ecosystem restoration at Pacific Northwest National Laboratory, updating soil profile maps and making wetland delineations in central Alaska and using Biological Index Values and water quality as metrics for efficacy of restoration practices in an urban park in St. Louis. 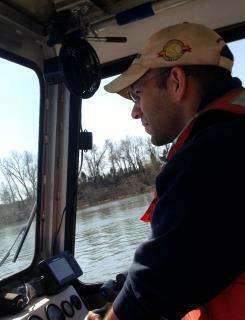 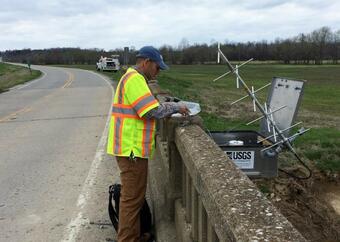 Since joining the Indiana-Kentucky Water Science Center, Murray Office, he has been given many opportunities to learn a great deal about water- quantity and quality issues from a great group of people. “Everyone I have worked with so far has brought their unique set of skills and was excited to be doing what they were doing. I have especially enjoyed working on water-quality issues for surface water”. Garcia believes that ensuring our resources are clean and available is paramount for generations to come and is excited to learn more about some of the issues USGS will be focusing on in the future and looks forward to contributing to these efforts as his career moves forward.