Tim Rykowski has a history of reviewing satellite ground systems. NASA’s Space Network Systems Manager, Rykowski figures he’s probably sat in on a few dozen such reviews during his 35 years at NASA, including the design and build of the Landsat 9 (L9) Ground System that’s going on now.

While each review experience is unique in its own way, Rykowski didn’t hesitate when asked his opinion about the work of the U.S. Geological Survey (USGS) and the Earth Resources Observation and Science (EROS) Center on the L9 Ground System.

“I think these guys have done terrific,” he said during a break at the recent L9 Ground System Critical Design Review (GCDR) in Brandon, SD. “It’s a very highly motivated team. They have a great work culture. Obviously, a lot of experience with doing Landsats in the past, which they bring to bear on this mission. So, the ability as an agency to execute a program like this is very evident.”

At the conclusion of the two-day GCDR, Rykowski and the 11 other members of the independent review panel comprised of NASA and USGS subject matter experts unanimously agreed that the review met all of the criteria for critical design. In fact, USGS and EROS included content that was beyond the review criteria in several cases, the panel concluded.

To be successful, the L9 Ground System team had to show that the design had been successfully completed, and that any previous Requests for Action (RFA) or advisories issued by the review panel had been addressed. All subsystems within the Ground   System had to have gone through Critical Design Reviews and associated peer reviews. Rykowski and his panel colleagues wanted to know that the L9 Ground System’s technical management, system design and demonstration, safety and mission assurance, and project management all were mature and available.

USGS EROS Landsat 9 Project Manager Brian Sauer and the Ground System team provided ample evidence over the two-day GCDR that they were:

“As we move further into build, integration and test,” Sauer said after the GCDR, “I am confident that our team is up for any challenges that are thrown at us.”

The review resulted in one RFA and three advisories. The RFA was issued on the Space Network interface development and test, and ensuring planning considers recent changes related to this interface. The advisories dealt with a clarification of Landsat 9 products, with Ground Readiness Testing scope/complexity and prioritization, and with LMOC security categorization.

Those issues will be addressed in short order, Sauer said. The reality is, the review panel specifically noted that the GCDR demonstrated that the maturity of the design as of today is “appropriate to support proceeding with full-scale fabrication, assembly, integration, and test” for the L9 Ground System.

In other words, Sauer added, “We met all the criteria we needed to build, integrate, and test it.”

And not only met the criteria, Rykowski summarized, but did so in an impressive way.

“I don’t know how many review boards I’ve been on in the course of my career. Probably a couple of dozen,” Rykowski said. “But this is near the top, for sure, in terms of the capabilities of the (L9 Ground System) staff and the work culture. This is a tremendous work culture here. It really is.” 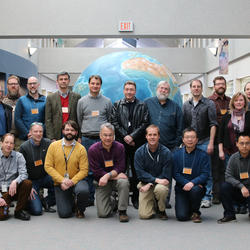