Imagine, Neal Pastick says, if the infrastructure under your house disappeared. If the concrete forms or block basement walls disintegrated over time, and your house collapsed. That’s an apt analogy, Pastick says, to what’s happening with the degradation of permafrost in Alaska today.

Without ground that remains frozen year-round—the definition of permafrost—carbon long sequestered in that deep freeze is being released into the atmosphere, says Pastick, a KBR Physical Scientist and contractor to the U.S. Geological Survey (USGS) who has studied permafrost degradation with his colleague, USGS Scientist Bruce Wylie, at the Earth Resources Observation and Science (EROS) Center.

Under the forces of thawing permafrost, ground surfaces may and do collapse, resulting in damage to infrastructure and homes, Wylie and Pastick say. Permafrost degradation also leads to vegetation communities being completely reorganized, they say.

To help assess where such degradation is occurring, the two men have mapped the state of near-surface permafrost in Alaska. Their work is significant enough that no less than the Arctic Science Ministerial (ASM), a group of science ministers from 25 countries, has included it in an initiative to increase international scientific collaboration on the Arctic over the long term. Major media organizations like the New York Times have cited it as well.

The two men recently discussed their work in Alaska, the importance of permafrost mapping, and some of their interesting experiences along the way.

What is near-surface permafrost?

Wylie: “We define it as near-surface permafrost if the top of that permafrost is within one meter of the surface.”

How deep does permafrost go?

Wylie: “If you Google it, you’ll see that there’s permafrost up to 2,000 feet below the surface of the ground up on the North Slope. But generally, we would see, I’d say, 30, 40 meters (of permafrost) from where our studies were. In a study by a collaborator, Airborne Electromagnetic, an electromagnetic torpedo was hung below a helicopter on a cable. The data it collected of the Yukon Flats area showed a lot of that permafrost was 100 meters thick, and thicker beyond what we could see on the loess hills to the south.”

How do you map near-surface permafrost?

Pastick: “Let’s break this down and start with the field work perspective because that kind of provides the basis from which we’re making these maps. We typically conduct field work in Alaska during late August or early September, not only because the mosquito populations have begun to dwindle and it’s really the nicest time of the year, but also mainly because the seasonally frozen ground is fully thawed. What we’re really after is quantifying the depth to which the top of the permafrost is at beneath the layer that thaws each summer.”

How do you quantify it?

Pastick: “We typically lay out a transect at a scale that’s equivalent to those remote sensing inputs that we’re using. Along these transects, we take a metal tile probe to quantify the depth to the top of the permafrost. It just involves inserting a metal rod into the ground ... and, when we hit the top of the permafrost, there’s a thud. It’s a tried, tested, and proven method that a lot of scientists have used in the past.”

Pastick: “We’ve also more recently been using electrical resistivity tomography surveys to develop seamless two- or three-dimensional images of permafrost distribution. We’ll place electrodes evenly spaced every meter or meter and a half along these transects. We then inject current into the ground using car batteries and measure that response or the potential field at a different pair of electrodes further down the line.”

What does that tell you?

Pastick: “With permafrost soils being more resistive to the flow of electrical current, and then conductive material or unfrozen soils being a little bit less resistive ... we can use the measured signals to make these seamless maps of the below-ground permafrost without having to manually probe or drill into the ground. If the measurements are large in one location, that means there’s something resistive probably stopping that flow of electrical current beneath those electrodes. So, there’s probably permafrost there, or it can mean that the soils are really dry. Dry soils are also highly resistive, too.”

How does remote sensing figure into your work?

Pastick: “We take those field observations then and intersect them with our remote sensing data, or other geospatial data, with factors known to reflect or explain the distribution of permafrost. So, like historical climate data, or vegetation maps ... something we’ll feed into these models. Basically, once we have this database, we use computer algorithms or machine learning algorithms to upscale those observations using those relationships across the larger landscape.”

What happens to carbon released from permafrost?

Wylie: “Carbon in the permafrost will decompose. If it’s not in the presence of oxygen ... it’s maybe under a wetland or in a really wet situation ... you’ll get methane, and that’s five times as potent of a greenhouse gas as carbon dioxide. If it decomposes with oxygen, you get carbon dioxide, which is a major greenhouse gas.”

If frozen ground thaws and vegetation begins growing there, won’t that absorb the carbon?

Wylie: “The question is, will plants become more productive and suck more of that carbon up in photosynthesis and store it in the roots and biomass, or will the plants not be able to keep up with the decomposition. Studies out there have conflicting future scenarios, but generally the consensus is the Arctic will change from a carbon sink to a carbon source. The decomposition and the emitting of carbon into the atmosphere will exceed what the plants are sucking up with photosynthesis.”

So, are you finding that permafrost is disappearing in Alaska?

Pastick: “There’s a substantial amount of evidence that it is across Arctic and boreal landscapes. Our work has typically not looked at long-term time series of permafrost degradation as a function of climate, but we have focused on wildfires, which are likely to increase in frequency and extent by the end of the 21st century.”

What do you see as far as the impacts of wildfires?

Pastick: “A wildfire can come in and remove all the surface organic material, such as vegetation and soil organics, which really act as insulation for the permafrost. Once you remove all this material, the surface energy budget changes, and permafrost can begin to thaw due to increased solar radiation. We’ve also seen instances where permafrost has actually started to reform, but more recent extreme weather events have actually curtailed that reformation of permafrost and has completely obliterated it in some instances.”

How are you able to project where near-surface permafrost may be in the future?

Wylie: “Our first objective was to make the most accurate map we could of permafrost. To do that, we had lots of observations around Alaska, in different years and at different times. Then we used a regression tree model with spatial inputs ... current climate, current precipitation, and current temperature. So, we already had a model developed that used climate as an input. All we did was then make a map with that model.”

Well, that helps you map permafrost today. So, how do you do it into the future?

Wylie: “Instead of putting current climate into the model, we put in future climate scenarios and make a map of that. The weakness of this approach is, we assume the land cover is constant, right? We didn’t change the land cover. So, in the future, if the fire frequency is going to increase, our model didn’t capture that. Ours was just isolating the effects of a change in climate on permafrost.”

Who is likely to use that information?

Wylie: “I think the process-based modelers who do the future climate projections will have a much better spatial representation of where permafrost is and where it isn’t than what they had before. We have a 30-meter pixel dynamic attribute of the probability of near-surface permafrost. I think others have looked at areas where we predicted permafrost would decline in the future and have looked at how much organic matter is in that permafrost in those areas. Both of those things would help.”

When you’re working in the field in Alaska, do you ever have encounters with the wildlife?

Pastick: “I think the most memorable experience for me actually was the first night I was in Fairbanks. I was about 23 years old, a little green behind the ears and the gills. My collaborator picked me up, and we traveled to the large animal research station in Fairbanks. I had the opportunity to cuddle with a baby musk ox, and these things are cute. I had the opportunity to cuddle with one named Kiwi, which was an orphan musk ox. And that was probably one of my most memorable experiences with wildlife in the area. They look like couches, shaggy 1970s-looking shag couches. It was pretty cool.” 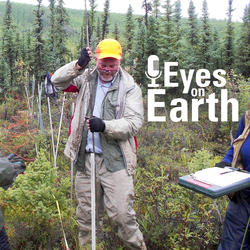 Eyes on Earth is a podcast on remote sensing, Earth observation, land change and science, brought to you by the USGS Earth Resources Observation and Science (EROS) Center. In this episode, we hear about efforts to map near surface permafrost across Alaska and why such efforts are important.

Eyes on Earth is a podcast on remote sensing, Earth observation, land change and science, brought to you by the USGS Earth Resources Observation and Science (EROS) Center. In this episode, we hear about efforts to map near surface permafrost across Alaska and why such efforts are important.

Distribution of near-surface permafrost in Alaska: estimates of present and future conditions

High-latitude regions are experiencing rapid and extensive changes in ecosystem composition and function as the result of increases in average air temperature. Increasing air temperatures have led to widespread thawing and degradation of permafrost, which in turn has affected ecosystems, socioeconomics, and the carbon cycle of high latitudes. Here we overcome complex interactions among surface and
By
Earth Resources Observation and Science Center, Earth Resources Observation and Science (EROS) Center
link
October 15, 2019

In the Arctic, there are lakes where the bubbles will burn.

The bubbles are filled with methane gas. The flammable archaeal belches form as microbes...