The topic, officially, was water. But during a scientific conference in Butte, Montana, in 2013, earthquake expert Michael Stickney glimpsed something unexpected in a three-dimensional lidar image of the Bitterroot Valley in nearby Missoula.

The valley’s beauty makes it a magnet for newcomers, some of them Hollywood and Silicon Valley celebrities. In a bare-earth lidar image, with the land surface portrayed in detail, Stickney saw what no one knew existed: an active seismic fault with the potential to trigger a magnitude 6.5 to 7.5 earthquake.

Such a quake would be “devastating,” said Stickney, director of the earthquake studies office at the Montana Bureau of Mines and Geology. “A quake of that magnitude could rupture a dam, flood a nearby town, bring down buildings in Missoula, and destroy homes in the valley where 150,000 people now live.”

“People have always thought the area was relatively immune to large earthquakes,” he said. No large quakes have ever been recorded there. “We knew the fault existed, but the best available evidence was that it was not active.”

Lidar, which stands for “light detection and ranging,” is the 21st-century version of George Washington’s surveyor’s compass and chain. Unlike aerial photography, lidar shows not only vegetation and objects on the land’s surface, but the structures beneath.

With lidar images, a forester can gauge the yield of a stand of trees. A solar power entrepreneur can estimate the energy reflectance of rooftops. A vehicle designer can improve fuel efficiency with technology that uses elevation data to determine when transmissions should upshift or downshift. A structural engineer can study an aging bridge for signs of potential failure.

Lidar mapping is usually done to meet specific needs: private companies conduct data-gathering flights and provide information to business and government clients. Clients’ requests and company practices determine what areas are mapped, how accurately and how often, and how data are analyzed, used, stored, and shared. The result is a crazy quilt that, in 2014, included high-quality lidar coverage of less than one-sixth of the lower 49 States and territories.

Those discontinuities severely limit the usefulness of lidar maps to anyone except the original clients. The result is missed economic opportunities, along with chances to protect the American people from earthquakes, floods, landslides, and other hazards.

The USGS is tackling the problem.

The USGS’ National Geospatial Program is in year one of an 8-year program to create the first publicly available, national 3D elevation map using lidar. Called the 3D Elevation Program or 3DEP, it is a collaboration of Federal agencies, States, territories, local governments, and private industries. 3DEP is systematically collecting lidar data across the country and leveraging existing lidar surveys into a central collection. The program established data quality standards and is now acquiring new lidar data to fill crucial gaps.

3DEP is expected to produce a tremendous return on an investment of $1 billion over 8 years, with costs shared among the USGS and other Federal agencies, as well as State and local partners. A 2011 national assessment led by the USGS documented more than 600 business uses for 3DEP products. Some applications have the potential to spark new technologies and industries, with economic benefits ranging from $690 million to $13 billion per year. These benefits extend to all 50 States and Puerto Rico.

A Pennsylvania utility company expects to save at least $67 million yearly by using lidar mapping to track trees’ encroachment on power lines. A major agricultural consulting firm estimates that lidar-based precision agriculture could save corn and wheat growers $50 million per year in the Red River Valley alone. 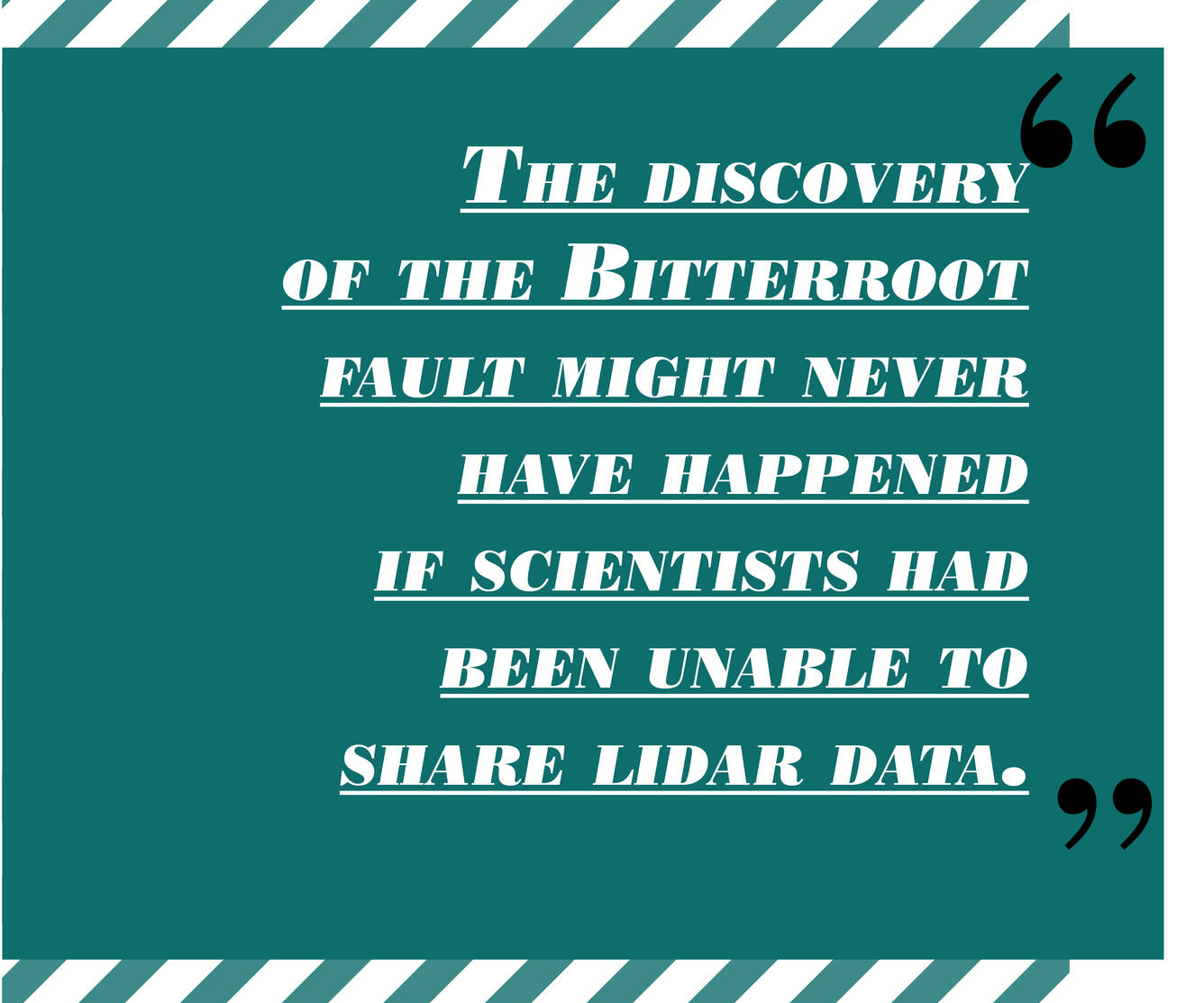 The discovery of the Bitterroot fault might never have happened if scientists had been unable to share lidar data.

Stickney explained that only a Federal initiative will ensure lidar data are available nationwide to help every State identify hazards, assess risks, and inform and protect citizens.

Important finds are in the future as 3DEP completes the national lidar data coverage. “Every time we have gotten lidar data for Montana,” Stickney said, “we’ve made new discoveries.”