All Systems Go for First Statewide Testing of ShakeAlert in the U.S.

Today, the U.S. Geological Survey and the State of California pressed the “go” button to allow the first-ever statewide public testing of the California Early Earthquake Warning System, which is powered by USGS’s earthquake early warning alerts, called ShakeAlerts.

Alerts will be delivered by two independent methods, first over the federal Wireless Emergency Alert (WEA) system and second through the University of California Berkeley’s MyShake smartphone app.

"Today we commemorate the 30th anniversary of one of our nation’s most destructive earthquakes, the magnitude 6.9 Loma Prieta quake. That event also marked the first deployment of an early forerunner of the ShakeAlert system, which was used to warn rescue workers about potentially dangerous aftershocks,” said USGS Director Jim Reilly. “Now, starting across the state of California, ShakeAlert is powering the nation’s first-ever statewide public earthquake early warning system that could be expanded to provide an early warning benefit for all citizens living in earthquake country,” he added.

USGS is starting delivery of ShakeAlert data through FEMA’s Integrated Public Alert and Warning System, which is used to deliver AMBER and weather alerts to cell phones via the WEA system operated by cellular companies. USGS and its partners have extensively tested this alert delivery pathway and are working continuously to improve the speed of ShakeAlert delivery to wireless devices.

ShakeAlerts will be sent through WEA to those statewide who could experience potentially damaging shaking from magnitude 5 or greater quakes. As the seismic network is expanded and the ShakeAlert system and modes for communicating the alerts are further developed and tested, the speed, reliability and public use of ShakeAlerts will also increase.

The MyShake app, which was developed by the University of California, Berkeley, and funded by the State of California and the Moore Foundation, will also send alerts to people who could feel shaking due to magnitude 4.5 or greater earthquakes.

This public testing phase for MyShake and WEA alerts is enabled by upgrades to, and increases in the density of, seismic networks and data analysis systems across the U.S. West Coast. We have been working with state emergency managers, universities and more than 60 pilot partners who now have systems actively using USGS-generated ShakeAlerts to develop products that protect lives and property. The USGS and its partners will be closely monitoring the performance of all delivery pathways that use ShakeAlert data and will work to improve alerting speeds and identify opportunities for further developments.

“USGS and its partners are making considerable progress with the build-out of the sensor network that underpins ShakeAlert,” said David Applegate, USGS associate director for natural hazards. “More than half of the 1,675 sensors needed to complete the West Coast system as designed have been installed and are operating, with the emphasis so far on installations near population centers.”

Depending on a user’s location, alerts may provide seconds to tens of seconds of warning before the user feels shaking from an earthquake that may affect them, though there will be users near the epicenter who do not receive the alert before they feel shaking. “This will often happen when a user is within a few tens of miles of the earthquake’s epicenter because of the time it takes to characterize an earthquake’s size and likely shaking levels, as well as delays resulting from the technologies our partners use to deliver the alert,” said USGS Earthquake Early Warning Chief Scientist Jeff McGuire.

McGuire emphasized that the speed of alert delivery will vary among users and also for the same user receiving ShakeAlerts through different mechanisms. “For example,” said McGuire, “the speed could be as short as a few seconds for apps like MyShake or significantly longer through the WEA system, and some users may not receive a WEA alert at all for a particular earthquake. The delivery technologies will hopefully get faster over time.”

ShakeAlerts and the delivery applications being developed by partners do not replace the need for people to plan for earthquakes by taking appropriate preparedness steps and mitigating the risk. When you receive an alert, you should act quickly to take a protective action such as Drop, Cover, and Hold On. Do not wait to feel the shaking. Examples of other protective actions are available online.

USGS is building the ShakeAlert earthquake early warning system in California, Oregon and Washington as a new tool being delivered by the Advanced National Seismic System. The enhanced sensor networks being built out for ShakeAlert will improve many existing ANSS information products. USGS ShakeAlert pilot partners in those states already use ShakeAlerts to trigger automated actions for critical infrastructure, including water conveyance systems and mass transit lines. Public alerting in Oregon and Washington will begin as soon as the sensor network is sufficiently built out and the citizens in those states can be educated about the system.

ShakeAlert partners are selected organizations or companies that helped to develop the seismic networks and data analysis systems that make ShakeAlert possible, or who can demonstrate the use of USGS-issued ShakeAlerts to reduce injuries or losses. In California, USGS institutional partners include the California Governor’s Office of Emergency Services, California Institute of Technology, University of California Berkeley, the California Geological Survey, the Gordon and Betty Moore Foundation, the University of Nevada, Reno, and the City of Los Angeles.

Earthquakes are a nationwide problem with more than 143 million people exposed to potentially damaging shaking in the United States. Fifty million of those people are in California, Oregon and Washington.

Release Date: OCTOBER 17, 2019 How will ShakeAlert® likely perform now on a large earthquake impacting a major urban area? How much warning will you get? To answer this, let’s do a thought experiment...
Learn More
link 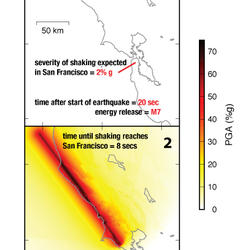 Release Date: OCTOBER 8, 2019 The goal of an earthquake early warning (EEW) system is to provide an alert to people and automatic systems after an earthquake begins but before the shaking reaches their location. As the USGS and its partners are developing an EEW system, called ShakeAlert®, for the West Coast, the benefits, costs, capabilities, and limitations are being investigated. Two recent...
By
Natural Hazards, Earthquake Hazards
link
October 8, 2019

Release Date: OCTOBER 8, 2019 The goal of an earthquake early warning (EEW) system is to provide an alert to people and automatic systems after an earthquake begins but before the shaking reaches their location. As the USGS and its partners are developing an EEW system, called ShakeAlert®, for the West Coast, the benefits, costs, capabilities, and limitations are being investigated. Two recent...
Learn More
link 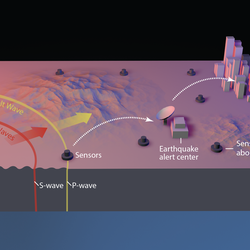 The USGS ShakeAlert Earthquake Early Warning System uses earthquake science and technology to detect significant earthquakes quickly so that alerts can reach many people before shaking arrives. The seconds to tens of seconds of advance warning can allow people and systems to take actions to protect life and property from destructive shaking.
Learn More
link
October 7, 2019

Next week, USGS and the nation commemorate the 30th anniversary of one of the most destructive earthquake disasters in U.S. history – the 1989 Loma...

The U.S. Geological Survey has awarded more than $12.5 million to seven universities and a university-governed non-profit to support operation...

The U.S. Geological Survey awarded approximately $4.9 million this week to six universities and a university-governed non-profit, to support...