This is the largest estimate of continuous oil that USGS has ever assessed in the United States.

The Wolfcamp shale in the Midland Basin portion of Texas’ Permian Basin province contains an estimated mean of 20 billion barrels of oil, 16 trillion cubic feet of associated natural gas, and 1.6 billion barrels of natural gas liquids, according to an assessment by the U.S. Geological Survey. This estimate is for continuous (unconventional) oil, and consists of undiscovered, technically recoverable resources.

The estimate of continuous oil in the Midland Basin Wolfcamp shale assessment is nearly three times larger than that of the 2013 USGS Bakken-Three Forks resource assessment, making this the largest estimated continuous oil accumulation that USGS has assessed in the United States to date.

“The fact that this is the largest assessment of continuous oil we have ever done just goes to show that, even in areas that have produced billions of barrels of oil, there is still the potential to find billions more,” said Walter Guidroz, program coordinator for the USGS Energy Resources Program. “Changes in technology and industry practices can have significant effects on what resources are technically recoverable, and that’s why we continue to perform resource assessments throughout the United States and the world.” 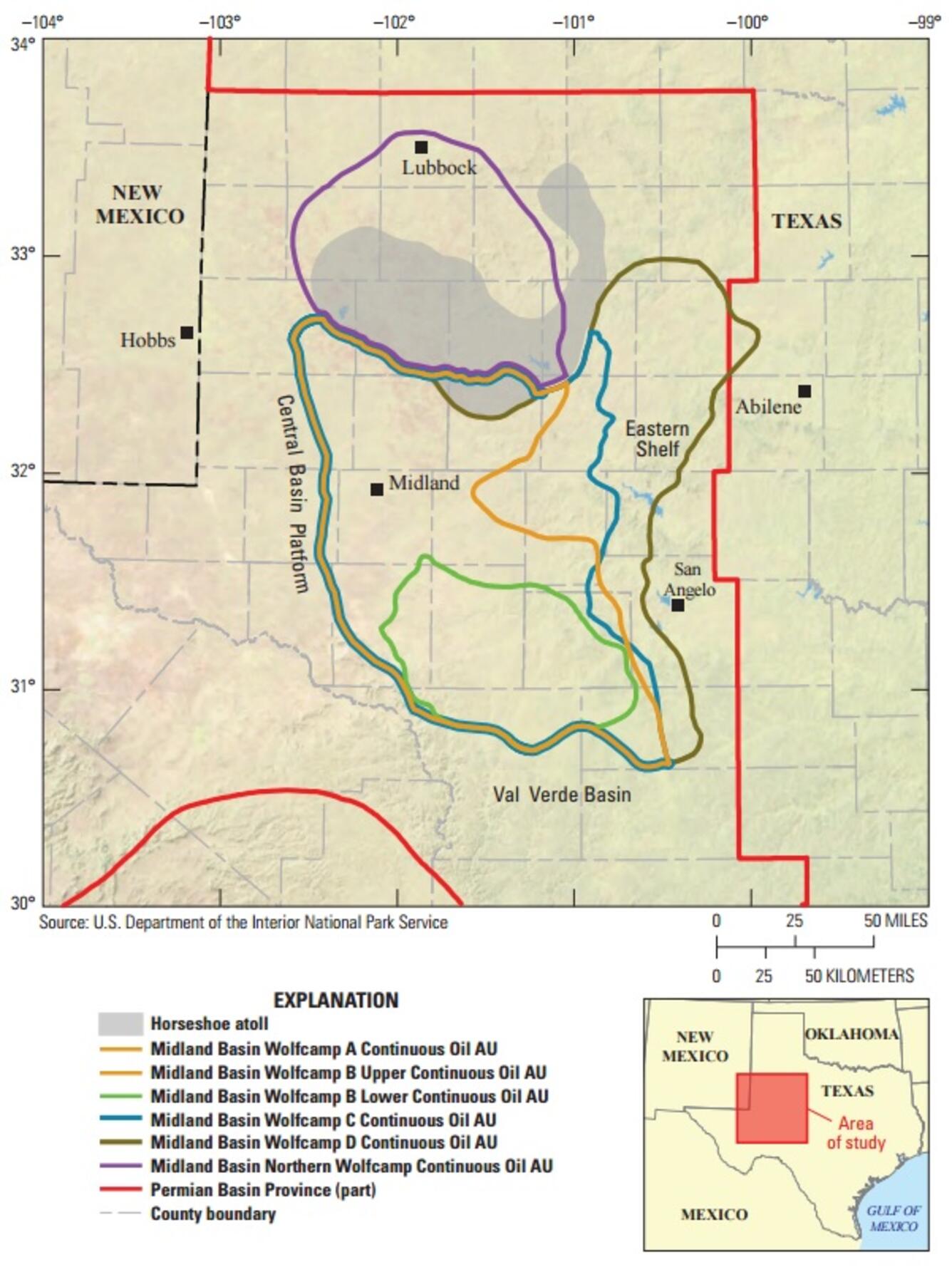 Since the 1980s, the Wolfcamp shale in the Midland Basin has been part of the “Wolfberry” play that encompasses Mississippian, Pennsylvanian, and Lower Permian reservoirs. Oil has been produced using traditional vertical well technology.

However, more recently, oil and gas companies have been using horizontal drilling and hydraulic fracturing, and more than 3,000 horizontal wells have been drilled and completed in the Midland Basin Wolfcamp section.

The Wolfcamp shale is also present in the Delaware Basin portion of the Permian Basin province, but was not included in this assessment. The Permian Basin province includes a series of basins and other geologic formations in West Texas and southern New Mexico. It is one of the most productive areas for oil and gas in the entire United States.

Continuous oil and gas is dispersed throughout a geologic formation rather than existing as discrete, localized occurrences, such as those in conventional accumulations. Because of that, continuous resources commonly require special technical drilling and recovery methods, such as hydraulic fracturing.

USGS is the only provider of publicly available estimates of undiscovered technically recoverable oil and gas resources of onshore lands and offshore state waters. The USGS Wolfcamp shale assessment was undertaken as part of a nationwide project assessing domestic petroleum basins using standardized methodology and protocol.

The new assessment of the Wolfcamp shale may be found online. To find out more about USGS energy assessments and other energy research, please visit the USGS Energy Resources Program website, sign up for our Newsletter, and follow us on Twitter.