The recent recipient of two major awards, Craig D. Allen, a research ecologist with the U.S. Geological Survey Fort Collins Science Center, has loved trees since childhood. He is now considered an expert of world renown on the twin phenomena of forest changes and tree mortality resulting from climate warming and drought, and in 2010 was twice recognized for his scientific contributions.

In December 2010, Dr. Allen was named a 2010 Fellow of the American Association for the Advancement of Science “for outstanding leadership in the synthesis of global forest responses to climate change, built from worldwide collaboration and a deep understanding of the environmental history of the southwestern United States.”

In March 2010, he was honored with the Meritorious Service Award from the U.S. Department of the Interior (DOI) in recognition of his outstanding vision, initiative, and scientific contributions to the USGS, DOI, and U.S. Department of Agriculture in establishing a model science program to support adaptive land management at the new Valles Caldera National Preserve in north-central New Mexico.

Dr. Allen has authored more than 85 publications on landscape ecology and landscape change, from fire history and ecology to ecosystem responses to climate change. He has appeared on NOVA discussing fire ecology and on The Discovery Channel and Discovery Canada explaining the links between drought-induced tree mortality and climate warming, in addition to being interviewed and quoted in innumerable newspaper articles on both topics.

But how did this unassuming scientist grow from nurturing maple saplings on 40 acres in Wisconsin to understanding forest system stress worldwide?

As a young boy growing up in Wisconsin, Craig Allen undertook his first ecological restoration project with his grandfather:  planting over 1000 trees and reintroducing many native wildflower species into a degraded 40-acre woodlot, then thinning and managing healthy trees over time—some for more than 40 years now. Once in graduate school, Allen’s academic focus broadened to the ecology of landscapes and natural resource management. At the same time, his geographic interests also expanded and he turned his attention toward the Jemez Mountains in northern New Mexico. In the early 1980s, Allen conducted landscape change studies there for both his master’s degree in biogeography (via the University of Wisconsin–Madison) and for his doctoral degree focused on forest ecology, landscape ecology, and conservation biology (via the University of California–Berkeley). In 1986 he settled in the Jemez area for good—punctuated with frequent visits to his family and the woodlot in Wisconsin, including helping his Dad make maple syrup there in the spring.

Since its inception, Dr. Allen has been the leader of FORT's Jemez Mountains Field Station, which is based at Bandelier National Monument in New Mexico. As a “place-based” scientist, Dr. Allen serves as a bridge between research and park management, identifying research efforts that will address management questions, fostering collaborations with various institutions to conduct needed research, and communicating research findings quickly and effectively to local and regional managers and the public.

Dr. Allen also helped develop a place-based science program at the nearby Valles Caldera National Preserve, a special landscape acquired in 2000 by the U.S. Forest Service. In developing a natural resource inventory, monitoring, and research program for the Preserve from 2001–2003, Dr. Allen implemented 27 different projects to inform decisions on natural resource management at the Preserve and provide a foundation for future science. He did this by donating considerable time beyond his USGS work to ensure that the science program was well established, believing as he does in the importance of “establishing a new standard in the use of high-quality science and education in land management.”

The Expansion of “Place” 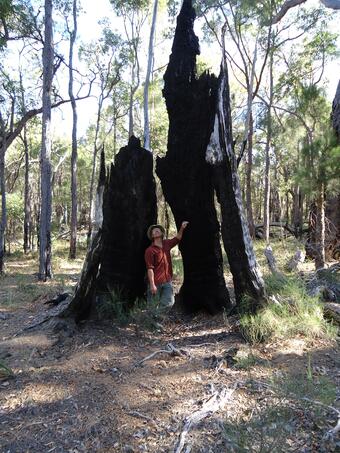 With his continuous presence and work in northern New Mexico since 1986, Dr. Allen has developed substantial expertise in the ecology of the Jemez landscape, providing him with the deep-rooted “institutional knowledge” that comes from being in a place long enough to understand its natural and human rhythms, history, and trends.

One of the things Dr. Allen learned about certain trends in the Jemez Mountains landscape is that they are not taking place in isolation. For example, he finds similar patterns of ecological disturbances across the region, such as widespread combinations of drought-related forest die-off events, severe forest fires, and accelerated soil erosion. In the semi-arid Southwest, these disturbances have been driving landscape-scale conversions of dominant vegetation from forests to shrub- and grass-dominated ecosystems, as well as desertification.

“I have taken the depth of knowledge gained from almost 30 years of research on the historical and recent dynamics of New Mexico forests and woodlands, and increasingly have been working with colleagues around the world to put this local, place-based knowledge into regional, continental, and global contexts," he says.

Since 2003 Dr. Allen has been one of the core principle investigators of the USGS Western Mountain Initiative, developing multidisciplinary global change research across a network of sites in western North America—including the Jemez. International collaborations increasingly emerged, such as work with colleagues from the University of Granada in southern Spain to investigate analogous ecological changes in the Sierra Nevada National Park and Biosphere Reserve.  In meetings and forums he has helped organize there, Dr. Allen has discussed climate-induced forest die-off in southwestern U.S. forests and woodlands and specific land management actions for adaptation to climate change. He continues to conduct field work and data analysis with University of Granada colleagues on a joint post-fire ecological restoration research project in Sierra Nevada National Park (testing an approach developed at Bandelier), as well as on climate-induced forest die-off in the region.

Seeing the bigger pattern, Dr. Allen has developed additional collaborations with a diverse range of scientists from all forested continents to document and better understand global patterns of drought and heat-induced forest die-off.

As part of this growing team of international scientists, Dr. Allen and colleagues have demonstrated that recent episodes of forest stress and tree mortality are evident in all forest types on all wooded continents. In their 2010 report, “A global overview of drought and heat-induced tree mortality reveals emerging climate change risks for forests,” Dr. Allen and his international coauthors found that recent tree loss in forests worldwide, driven by climate stress, could portend increased tree mortality under current climate-change projections. Especially  since the 1990s, substantial episodes of tree mortality have occurred in places where warming temperatures and major droughts have occurred, ranging from tropical forests in Brazil and Australia to China, North America, and Mediterranean countries like Algeria and Spain.

Their report documents the sensitivity of many of the world's forests to climate-related drought and heat stress, to the extent that forests could become increasingly vulnerable to further mortality—with subsequent detrimental effects on timber production, watershed and biodiversity protection, carbon sequestration, and recreation.

Craig with iconic NPR reporter Chris Joyce doing an interview on top of a mountain in New Mexico.

USGS colleague and fellow WMI climate scientist Jill Baron observes, "Craig has served as a catalyst for research into how to sustain the world's forests and the huge reservoirs of carbon and biodiversity and other ecosystem services that they contain, in the face of anticipated further increases in climate stress."

As Dr. Allen and his many colleagues continue to look for and understand patterns among forested sites, he remains hopeful that studying the effects of drought and warming temperatures on the world’s forests—including those of the Jemez Mountains—will reveal the processes driving the sensitivity of woody vegetation to climate stress. Understanding these processes and their ecological effects can help managers conserve forest ecosystems by anticipating change and developing realistic adaptation scenarios.

“Determination of global patterns, trends, and process-based thresholds of climate-driven tree mortality can support land management approaches, like forest thinning, that may increase the resilience of existing forests to growing water stress,” Allen says. “This work also can highlight the magnitude and scope of forest-related values and services that are at risk if rapid climate disruption proceeds unchecked— and perhaps help energize efforts to mitigate underlying drivers of climate change.”

Watering the forest for the trees: An emerging priority for managing water in forest landscapes

Widespread threats to forests resulting from drought stress are prompting a re-evaluation of priorities for water management on forest lands. In contrast to the widely held view that forest management should emphasize providing water for downstream uses, we argue that maintaining forest health in the context of a changing climate may require focusing on the forests themselves and on strategies to
By
Ecosystems, Fort Collins Science Center
December 31, 2009

Greenhouse gas emissions have significantly altered global climate, and will continue to do so in the future. Increases in the frequency, duration, and/or severity of drought and heat stress associated with climate change could fundamentally alter the composition, structure, and biogeography of forests in many regions. Of particular concern are potential increases in tree mortality associated with
By
Ecosystems, Fort Collins Science Center
December 31, 2009

In recent decades, intense droughts, insect outbreaks, and wildfires have led to decreasing tree growth and increasing mortality in many temperate forests. We compared annual tree-ring width data from 1,097 populations in the coterminous United States to climate data and evaluated site-specific tree responses to climate variations throughout the 20th century. For each population, we developed a cl
By
Ecosystems, Fort Collins Science Center
December 31, 2008

Global climate change is projected to produce warmer, longer, and more frequent droughts, referred to here as “global change-type droughts”, which have the potential to trigger widespread tree die-off. However, drought-induced tree mortality cannot be predicted with confidence, because long-term field observations of plant water stress prior to, and culminating in, mortality are rare, precluding t
By
Ecosystems, Fort Collins Science Center