Space, it turns out, can be a messy place.

Sixty years of manned and unmanned space flight have left a cosmic junkyard circling the planet. From spent boosters to the detritus of defunct satellites, collisions, and explosions, there are countless potential cataclysms waiting to happen as space debris travels at relative velocities approaching 18,000 miles per hour.

There is no question but that they pose concerns for Landsat satellites, said Doug Daniels, Principal Systems Engineer with The Aerospace Corporation at the Earth Resources Observation and Science (EROS) Center.

“Absolutely, space debris is something that the Landsat flight operations teams and the mission managers worry about on a daily basis,” Daniels said. “Avoiding any type of collision with orbiting spacecraft or a piece of space debris ... everything the team does is paramount to ensuring that doesn’t happen.”

In 2017, the U.S. government reported that it logged 308,984 close calls with space junk and issued 655 "emergency-reportable" alerts to satellite operators. The U.S. Department of Defense uses what it calls the Space Surveillance Network to detect, track, and catalogue the many human-made items swirling around the planet using a global network of telescopes.

The clutter in low Earth orbit—described as the space up to 1,250 miles from the planet’s surface—has grown rapidly in the last 15 years:

Today, more than 23,000 known man-made fragments larger than about four inches—a little wider than two golf balls across—zip around our planet. Those are just the pieces large enough to track. An estimated 500,000 pieces between 0.4 inches and 4 inches across are also littering space.

For a satellite to be hit by debris and survive, it would likely have to something as small as a paint fleck, Daniels said. “Any time that you have a satellite that is hit by space debris, it’s bad,” he said. “The outcome is never going to be positive. It really doesn’t take that much.”

While monitoring tools can assess the orbital debris environment and give Landsat operators a week or more to avoid potential collisions, there are other times when they only have a few hours to react, Daniels said. In either case, the well-being of Landsat isn’t left to the Hollywood image of a flight operator nervously commanding the satellite with a joystick 400-plus miles below.

In fact, a lot of planning by the flight dynamics team goes into uploading commands to the satellite to move it out of harm’s way—say, through a burn sequence that has to be done at a specific moment and for just the right amount of time. While it’s a great visual for the movies, you don’t execute that kind of precision with a hand on a joystick, Daniels said.

“Landsat flight leadership ... Jim Lacasse, Keith Alberts, Martin England, and Guy Thayer and their teams ... really work hard to determine what the optimal maneuver or burn plan is because Landsat is located where it is for a reason,” Daniels said. “We want Landsat satellites to stay in their orbital tracks; that’s where our mission is. Any time we are forced to move the spacecraft out of the way of debris, it can mean we are positioning the satellite in an orbital location we don’t want it to be. If needed, reorienting the satellite and getting it back to where it was before isn’t easily accomplished.”

“The question about responsibility and diligence when it comes to those situations is based on an owner-operator perspective,” he said. “It depends on good communication. There aren’t any laws or traffic cops, if you will, governing those outcomes.”

While gravity eventually will pull all debris into the atmosphere and burn it up, that can take decades or longer. The international rule of thumb is that satellites need to position themselves at an altitude low enough in orbit so that they can deorbit once their missions are complete and then burn up within 25 years.

Without that kind of space stewardship, the clutter will only continue to grow, Daniels said. And the more debris in space, the more likely a scenario that NASA scientist Donald Kessler proposed in 1978—what came to be known as the Kessler Syndrome—could become reality. The Kessler Syndrome suggests that when the density of objects in low Earth orbit becomes great enough, collisions between objects could cause a cascade in which each collision generates more space debris and increases the likelihood of further collisions.

“Essentially, we would have this escalating factor of a debris field in low Earth orbit such that it would become unusable,” Daniels said.

Think about it, he continued. At some point, too much debris may mean we can’t fly satellites like Landsat, or that people wouldn’t be able to leave the planet because flying a human astronaut through low Earth orbit would be too dangerous.

“Obviously, we never want to get there,” Daniels said. “So, being responsible in space, understanding how debris is created, tracking space debris, responsibly operating spacecraft, moving out of the way ... it’s all paramount to our continued use of space.” 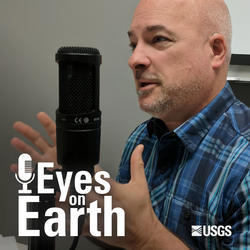 Eyes on Earth is a podcast on remote sensing, Earth observation, land change and science, brought to you by the USGS Earth Resources Observation and Science (EROS) Center. In this episode, we hear about the challenges of space debris in Earth orbit.

Eyes on Earth is a podcast on remote sensing, Earth observation, land change and science, brought to you by the USGS Earth Resources Observation and Science (EROS) Center. In this episode, we hear about the challenges of space debris in Earth orbit.