A USGS study characterized groundwater flow paths from possible PFAS sources at three former and active military facilities in southeastern Pennsylvania. The new research will help federal, state and local officials, water resource managers and the public as they work to address PFAS contamination in groundwater and surface water used for private and public water supply.

The researchers characterized groundwater flow in the vicinity of the former Naval Air Warfare Center Warminster and Willow Grove Naval Air Station Joint Reserve Base, as well as the active Horsham Air Guard Station, which is a section of the former Willow Grove NASJRB. Past sampling of some of the residential and public supply wells in that area found per- and polyfluoroalkyl substances, known as PFAS, at concentrations above U.S. Environmental Protection Agency provisional health advisory levels for drinking water. The study was done at the request of the U.S. Navy and in consultation with other federal and state agencies and local stakeholders.

PFAS are synthetic chemicals commonly used for fire-fighting foams, fire-retardant coatings on carpeting and clothing, linings of fast food boxes and other applications. PFASs are not readily biodegradable and are susceptible to migrating away from the original source through water. Groundwater can be a potential path for PFAS to move through aquifers used for water supply. Knowing where the flow paths are can help determine where contaminants in groundwater are going, and how current contaminant distribution relates to source locations.

Sampling for PFAS concentrations in groundwater has been done in the area by the U.S. Navy, Air National Guard, EPA and public water suppliers since 2014. Pumping of groundwater for public supply and private use near the bases has decreased since 2014, partly in response to presence of PFAS in groundwater.

The USGS developed a groundwater-flow model based on compilation and analysis of hydrologic data from 1999 to 2017 that includes water levels in wells, streamflow, point discharges to streams, groundwater withdrawals (pumping from wells and quarries) and precipitation. This timeframe was selected based on data availability and to represent changes in water withdrawals and climatic conditions before and after PFAS contamination in groundwater was found in 2014.

The flow paths modeled by the USGS are consistent with the locations of many residential wells identified as having elevated PFAS concentrations. USGS simulations showed groundwater discharge to withdrawal wells and local streams generally within a mile or two of the bases. Decreased pumping increased flow-path discharge to streams and widened the potential spread.

There are some areas of observed PFAS contamination outside of the flow paths simulated in the model. These areas include clusters of wells on the north side of Little Neshaminy Creek, north and southwest of the Willow Grove base and southwest and northwest of the Warminster base. Possible explanations for the occurrence of elevated PFAS in groundwater in areas outside of simulated flow paths include data and modeling limitations, unknown mechanisms of PFAS transport, and (or) the presence of unidentified PFAS sources, including sources unrelated to Navy or Air National Guard activities. Improved understanding of PFAS sources and potential contamination spread can help decisionmakers working to identify efficient monitoring programs and manage or mitigate contamination in these water resources.

The USGS report documenting the development of the model and simulation results as well as hydrologic data compiled and analyzed for the study is available online at https://doi.org/10.3133/ofr20191137. 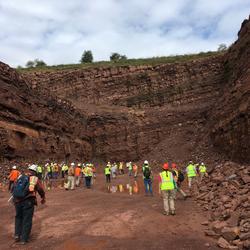 Contaminants in groundwater near former Navy bases in southeastern Pennsylvania

USGS has investigated groundwater flow and contaminant transport in the vicinity of former Navy bases in Bucks and Montgomery Counties, southeastern Pennsylvania, in cooperation with the U.S. Navy. Additional cooperative support for these investigations has been provided by the U.S. Environmental Protection Agency, Pennsylvania Department of Environmental Protection, Bucks and Montgomery counties...
By
Pennsylvania Water Science Center
link
April 13, 2021

Contaminants in groundwater near former Navy bases in southeastern Pennsylvania

USGS has investigated groundwater flow and contaminant transport in the vicinity of former Navy bases in Bucks and Montgomery Counties, southeastern Pennsylvania, in cooperation with the U.S. Navy. Additional cooperative support for these investigations has been provided by the U.S. Environmental Protection Agency, Pennsylvania Department of Environmental Protection, Bucks and Montgomery counties...
Learn More
February 6, 2020

Groundwater withdrawals and regional flow paths at and near Willow Grove and Warminster, Pennsylvania—Data compilation and preliminary simulations for conditions in 1999, 2010, 2013, 2016, and 2017

In 2014, groundwater samples from residential and public supply wells in the vicinity of two former U.S. Navy bases at Willow Grove and Warminster, and an active Air National Guard Station at Horsham, Bucks and Montgomery Counties, Pennsylvania, were found to have concentrations of perfluorooctanoic acid (PFOA) and perfluorooctane sulfonate (PFOS), which are per- and polyfluoroalkyl substances (PF
By
Water Resources, Pennsylvania Water Science Center