How Big Was That Earthquake?

Earthquake magnitudes may seem straightforward, but a lot goes into their calculation, and multiple methods can be used.  These methods must account for many complications, like the impacts of local geology on the amplitude of shaking.  In Yellowstone, a modern seismic network and experienced analysts make it possible to determine the magnitudes of even the smallest earthquakes!

Yellowstone Caldera Chronicles is a weekly column written by scientists and collaborators of the Yellowstone Volcano Observatory. This week's contribution is from David Shelly, seismologist with the U.S. Geological Survey, and Jamie Farrell and James Pechmann, seismologists with the University of Utah.

How do seismologists determine the size of an earthquake? This sounds like a simple question, and it is a fundamental task of earthquake monitoring in Yellowstone and elsewhere.  Although simple in concept, in practice measuring the magnitude of an earthquake can be quite challenging.  It’s not as easy as making the earthquake stand on a scale and reading the dial.  In fact, methods to compute earthquake magnitudes have evolved considerably over the years and continue to evolve today.

The first earthquake magnitude scale was invented by Charles Richter for southern California in 1935.  Unlike seismic intensity, which measures the strength of shaking and varies according to distance from the quake and other factors, the magnitude is intended to measure the intrinsic size of an earthquake.  The “Richter scale” (also known as “local magnitude” or ML) assigns a magnitude based on the distance from the source and the recorded amplitude on a particular type of seismograph used in Richter's day.  Richter adapted the concept of magnitude from astronomy, including the use of a logarithmic scale to characterize the huge range of earthquake sizes.  In a logarithmic scale, magnitudes separated by 1 on the scale are 10 times different in their amplitude—a magnitude-4 earthquake is 10 times larger in amplitude than a magnitude 3, for instance.  But Richter reversed the direction such that larger magnitudes indicated larger earthquakes (whereas in astronomy, smaller magnitudes indicate brighter stars).

The Richter scale was an important development, but there were problems.  First of all, the scale saturates for the largest earthquakes—that is, the scale is unable to accurately distinguish between an earthquake of magnitude about 7.0 and one that is in fact much larger.  The other problem is that geology varies among different regions, meaning that the rocks may absorb differing amounts of energy between the earthquake source and the seismic station where the earthquake is recorded. Because of this variability, the method for determining Richter magnitudes usually must be modified for use in regions outside southern California.

To solve these problems, scientists developed a new magnitude scale called moment magnitude, sometimes written Mw.  Unlike the Richter scale, moment magnitude is based on a physical quantity of the earthquake source, the seismic moment, which represents the average fault slip multiplied by the area over which the slip occurs and by the stiffness of the surrounding rocks. The equations are written such that ML and Mw magnitudes are roughly comparable.   Moment magnitude has now replaced the Richter scale as the standard for measuring large earthquakes worldwide (above about magnitude 5), and it is sometimes calculated down to about magnitude 3 in places where seismic networks are dense and high quality.  But Mw has challenges—it's slower and more involved to calculate than other magnitudes like ML, requiring careful modeling of the earthquake waveforms.  And smaller earthquakes are not readily amenable to this type of processing, although determining Mw for smaller earthquakes is an area of current research.

Earthquakes in the Yellowstone area are monitored by the University of Utah Seismograph Stations (UUSS) in partnership with the U.S. Geological Survey.  In addition to ML and Mw, UUSS also uses a scale called “coda magnitude” (Mc) to characterize earthquakes in the region.  This magnitude measurement is based on how long it takes for the seismic energy to return to background levels after the earthquake.  Mc is designed to be compatible with ML.

Sometimes an earthquake may be initially reported with either ML or Mc magnitude types, before being later updated to Mw.  In addition, an earthquake magnitude of the same type is sometimes revised later after more data become available or the data are re-analyzed more thoroughly. The numerical magnitude may change in this process, but the magnitude changes are usually small.  Seismologists are continually working to improve methods used to measure earthquake magnitude, while also maintaining consistency with earlier monitoring.

Long-term investments in monitoring infrastructure at Yellowstone, including increased density and quality of seismometers, have paid dividends by providing better estimates of earthquake locations and magnitudes, not to mention the ability to detect increasingly small earthquakes.  Scientists use this information, in combination with other monitoring data, to infer what’s happening within the volcanic system of Yellowstone and its neighboring faults.  Earthquake data are particularly valuable because seismic waves emanate from deep underground, where we have few other direct measurements.

So, the next time you hear about an earthquake (or feel one yourself!), you can ask, “How big was that earthquake...on the moment magnitude scale?” 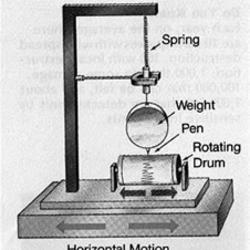 Earthquake magnitude, energy release, and shaking intensity are all related measurements of an earthquake that are often confused with one another. Their dependencies and relationships can be complicated, and even one of these concepts alone can be confusing.

Here we'll look at each of these, as well as their interconnectedness and dependencies.

Earthquake magnitude, energy release, and shaking intensity are all related measurements of an earthquake that are often confused with one another. Their dependencies and relationships can be complicated, and even one of these concepts alone can be confusing.

Here we'll look at each of these, as well as their interconnectedness and dependencies.

Earthquakes in and around Yellowstone: How often do they occur?

The U.S. Geological Survey produces seismic hazard maps for the United States and the 2018 nationwide long-term assessment shows that the Yellowstone...

A history of Yellowstone earthquakes

The Yellowstone region is one of the most seismically active areas in the United States, experiencing around 1,500 – 2,500 located earthquakes per...