Both wildlife and human health in Hawai‘i and other island ecosystems in the Pacific Basin face continued threats from introductions of diseases and vectors. Accidental introduction of mosquito-borne avian malaria and pox virus to Hawai‘i is an outstanding example of how biological invasions can have a profound effect on endemic wildlife. The geographic distribution, density, and community structure of endemic Hawaiian avifauna has changed dramatically in the last century, in large part because of the spread of these diseases and their introduced mosquito vector. More recently, the spread of chikungunya virus in the Caribbean and western Pacific and west nile virus on the mainland U.S. place the Hawaiian Islands at high risk for introduction of new human diseases.

Both wildlife and human health in Hawai‘i and other island ecosystems in the Pacific Basin face continued threats from introductions of diseases and vectors. Accidental introduction of mosquito-borne avian malaria and pox virus to Hawai‘i is an outstanding example of how biological invasions can have a profound effect on endemic wildlife. The geographic distribution, density, and community structure of endemic Hawaiian avifauna has changed dramatically in the last century, in large part because of the spread of these diseases and their introduced mosquito vector. More recently, the spread of chikungunya virus in the Caribbean and western Pacific and west nile virus on the mainland U.S. place the Hawaiian Islands at high risk for introduction of new human diseases. USGS scientists have collected and analyzed large spatial and temporal datasets on the prevalence and incidence of avian malaria and pox virus in forest bird populations in the Hawaiian Archipelago and American Samoa, the ecology of their primary mosquito vector, complementary data on the genetic variation of hosts, vectors and parasites and epidemiological factors such as host susceptibility and resistance, parasite virulence and vector competency.  Continued analysis and integration of these data into epidemiological models is needed to support Strategic Decision Making (SDM) and adaptive management toward the continued protection and restoration of migratory and endangered Hawaiian forest bird species on DOI managed lands such as Hakalau Forest National Wildlife Refuge, Hawaii Volcanoes National Park, Haleakala National Park and the National Park of American Samoa. At the same time, current field and laboratory studies maintain capabilities for rapid response to new vectors and emerging pathogens that continue to arrive on isolated Pacific Islands.

We continue to work closely with partners from the National Park Service, U.S. Fish and Wildlife Service (Region 1 Migratory Birds, Region 1 Ecological Services and Region 1 USFWS Refuge Offices), and the Department of Marine and Wildlife Resources in American Samoa to  acquire basic knowledge of the biology and impact of existing and new vectors and pathogens affecting wildlife and public health in the Pacific Basin and to develop tools and strategies for predicting disease outbreaks, assessing their severity, and monitoring success of adaptive management for the control of mosquito vectors and disease. Specific objectives of this task are to:

We have completed manuscripts with colleagues at the University of Hawai‘i, Hilo and the Wisconsin Cooperative Wildlife Research Unit on the impacts of malaria and pox transmission on Apapane populations at Hawai‘i Volcanoes National Park, genetic diversity of malarial isolates in Hawaiian forest birds, modeling avian malaria at the landscape level, dispersal of vectors of avian disease, the effects of temperature and climate change on avian disease in Hawai‘i, and adaptive responses of native forest birds to avian malaria. We have published 6 book chapters and online compendiums on avian malaria, avian pox and disease management. Key findings include the significant impact that avian malaria has on the most common native species with annual mortality rates that may approach 100% in juvenile birds and unexpected genetic diversity in both malarial and pox organisms that may contribute to virulence and transmission of these diseases. Computer models that we have developed in conjunction with colleagues at the Wisconsin Cooperative Wildlife Research Unit indicate that global climate change will have a significant impact on disease transmission in Hawai‘i and will contribute to loss of high elevation refugia where many native species are currently able to avoid pox and malaria. We have worked with colleagues at the University of Hawai‘i, Hilo to develop a TaqMan Real Time PCR assay for avian pox virus that will allow us to improve transmission models for avian pox and to ultimately explore in more detail how this disease interacts with malaria. We have documented the prevalence, geographic, and altitudinal distribution of a new pathogen in Hawai‘i ‘Amakihi, the scaley leg mite (Knemidokoptes jamaicensis) and collected data that suggest that knemidoptic mange may impact survivorship of wild birds.

Completion of a final report on genetic diversity of Wolbachia endosymbionts in Culex mosquitoes from Hawaii, Midway Atoll, and American Samoa

Completion of a final report on effects of climate and land use on diversity, prevalence, and seasonal transmission of avian hematozoa in American Samoa

Work in 2017 will focus on the completion of reports on 1) the diversity and distribution of avian blood parasites from SW Pacific island archipelagoes, 2) disease assessment at sites on the island of Hawai‘i and 3) effects of Rapid ‘Ōhi‘a Death on Hawaiian avifauna. Additionally, analysis will continue on interactions of avian pox and avian malaria in native Hawaiian forest birds. 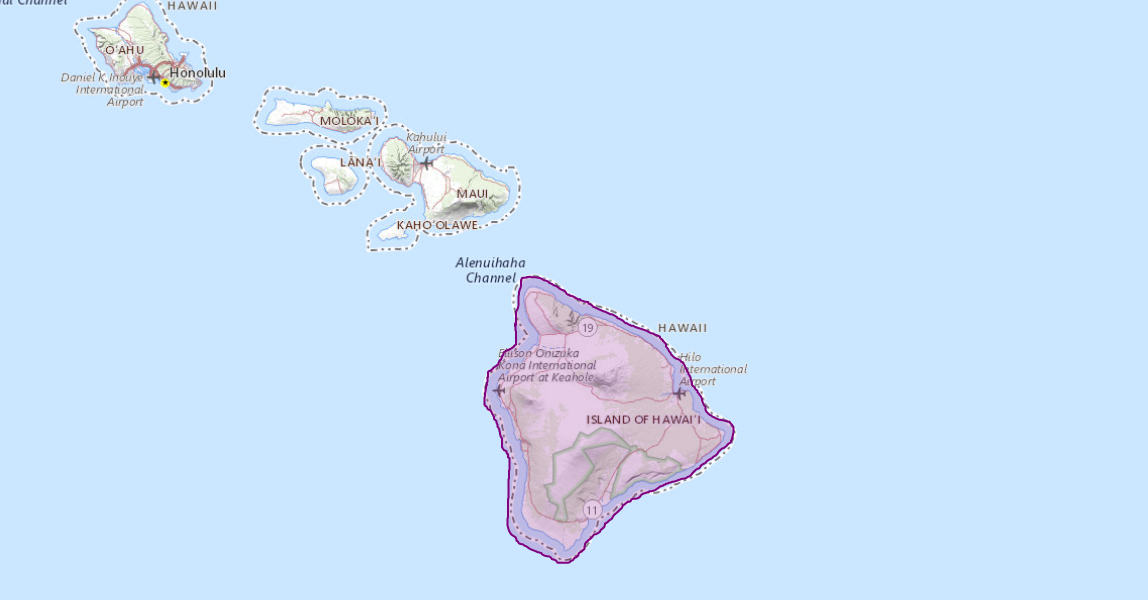 This data set provides the simulated results of releasing malaria-resistant Iiwi into existing populations of wild birds on the Island of Hawaii. Resistant birds are released into mid- and high-elevation forests at different densities at 10-year intervals from 2030 to 2070. Populations of both malaria-resistant and susceptible Iiwi are then predicted at 10-year intervals from release until 2100. P
By
Pacific Island Ecosystems Research Center

Recent detections of avian malarial parasites in native and non-native forest birds at Hakalau Forest National Wildlife Refuge and reports of epidemic transmission of the disease in high elevation habitats as well as controversy over accuracy of the PCR (polymerase chain reaction) diagnostic test that was being used led to a request by U.S. Fish and Wildlife Service to see if existing blood sample
By
Ecosystems, Pacific Island Ecosystems Research Center
December 26, 2019

Avian malaria has played a significant role in causing extinctions, population declines, and limiting the elevational distribution of Hawaiian honeycreepers. Most threatened and endangered honeycreepers only exist in high-elevation forests where the risk of malaria infection is limited. Because Culex mosquito vectors and avian malaria dynamics are strongly influenced by temperature and rainfall, f
By
Ecosystems, Pacific Island Ecosystems Research Center
May 22, 2018

Despite the purported role of avian pox (Avipoxvirus spp.) in the decline of endemic Hawaiian birds, few studies have been conducted on the dynamics of this disease, its impact on free‐living avian populations, or its interactions with avian malaria (Plasmodium relictum). We conducted four longitudinal studies of 3–7 yr in length and used generalized linear models to evaluate cross‐sectional preva
By
Ecosystems, Pacific Island Ecosystems Research Center
May 2, 2018

Characterization of Plasmodium relictum, a cosmopolitan agent of avian malaria

Avian malaria, transmitted by Culex quinquefasciatus mosquitoes in the Hawaiian Islands, has been a primary contributor to population range limitations, declines, and extinctions for many endemic Hawaiian honeycreepers. Avian malaria is strongly influenced by climate; therefore, predicted future changes are expected to expand transmission into higher elevations and intensify and lengthen existing
By
Cooperative Research Units
March 30, 2016

Changes in the prevalence of avian disease and mosquito vectors at Hakalau Forest National Wildlife Refuge: a 14-year perspective and assessment of future risk

Throughout the main Hawaiian Islands, introduced mosquito-borne disease has had, and continues to have, a profound impact on the distributions and abundance of native Hawaiian forest birds. Populations of remaining native forest birds are largely restricted to high elevation forests where mean temperatures are marginal for vector and parasite development and limited availability of larval mosquito
By
Ecosystems, Pacific Island Ecosystems Research Center
February 24, 2016

Incompatible insect techniques are potential methods for controlling Culex quinquefasciatus and avian disease transmission in Hawai‘i without the use of pesticides or genetically modified organisms. The approach is based on naturally occurring sperm-egg incompatibilities within the Culex pipiens complex that are controlled by different strains of the bacterial endosymbiont Wolbachia pipientis (wPi
By
Ecosystems, Pacific Island Ecosystems Research Center
January 31, 2016

Effects of Climate and land use on diversity, prevalence, and seasonal transmission of avian hematozoa in American Samoa

The indigenous forest birds of American Samoa are increasingly threatened by changing patterns of rainfall and temperature that are associated with climate change as well as environmental stressors associated with agricultural and urban development, invasive species, and new introductions of avian diseases and disease vectors. Long term changes in their distribution, diversity, and population size
By
Ecosystems, Pacific Island Ecosystems Research Center
September 16, 2015

Will a warmer and wetter future cause extinction of native Hawaiian forest birds?

Isolation of the Hawaiian archipelago produced a highly endemic and unique avifauna. Avian malaria (Plasmodium relictum), an introduced mosquito-borne pathogen, is a primary cause of extinctions and declines of these endemic honeycreepers. Our research assesses how global climate change will affect future malaria risk and native bird populations. We used an epidemiological model to evaluate future
By
Ecosystems, Cooperative Research Units, Status and Trends Program
September 4, 2015

In 1826, the paradise that was the Hawaiian Islands was changed forever when the first mosquito species was accidentally introduced to the island of Maui. Though it has not lived up to its potential as a vector of human disease in the islands, Culex quinquefasciatus and the avian pathogens it transmits laid waste to perhaps the world's most remarkable insular avifauna. Today the lowland native for
By
Ecosystems, Pacific Island Ecosystems Research Center
April 16, 2015

Knowing the genetic variation that occurs in pathogen populations and how it is distributed across geographical areas is essential to understand parasite epidemiology, local patterns of virulence, and evolution of host-resistance. In addition, it is important to identify populations of pathogens that are evolutionarily independent and thus ‘free’ to adapt to hosts and environments. Here, we invest
By
Ecosystems, Pacific Island Ecosystems Research Center
November 1, 2014