Invasive Mammals of the Pacific Completed

The terrestrial biota of the Central Pacific is primarily defined by its degree of isolation.  At the center lies the Hawaiian Archipelago, which is more than 3,200 km from any continental land mass.  After tens of millions of years of evolutionary isolation from all mammals except bats, islands of the Central Pacific were quite suddenly besieged by a number of alien rodents, carnivores and both large and small herbivores. The first mammals were introduced by early canoe voyagers of the Pacific more than 1,000 years ago.  The discovery of the Hawaiian Islands by Cook in 1778, like many other islands of the Pacific, marked the second wave of introductions of many hoofed animals for beasts of burden, milk, hides and meat as well as small predators to keep an assortment of stowaway rodents at bay.

The terrestrial biota of the Central Pacific is primarily defined by its degree of isolation. At the center lies the Hawaiian Archipelago, which is more than 3,200 km from any continental land mass.  After tens of millions of years of evolutionary isolation from all mammals except bats, islands of the Central Pacific were quite suddenly besieged by a number of alien rodents, carnivores and both large and small herbivores. The first mammals were introduced by early canoe voyagers of the Pacific more than 1,000 years ago. The discovery of the Hawaiian Islands by Cook in 1778, like many other islands of the Pacific, marked the second wave of introductions of many hoofed animals for beasts of burden, milk, hides and meat as well as small predators to keep an assortment of stowaway rodents at bay.

Rapid ecological degradation ensued and whole groups of endemic plants and animals suffered extinctions, including virtually all flightless birds, and roughly nine percent of all Hawaiian flora.  After a century of settlement by westerners, the concept of eradicating non-native species came about as a solution to primarily agricultural, public health, or economic problems, and only more recently to solve ecological problems.  Reversing the devastating effects of alien mammals has proven to be difficult, but limited successes have resulted in the dramatic recovery of native biota.

Most of the isolated islands of the Pacific existed for tens of millions of years in the absence of terrestrial mammals except for bats, which were able to fly over vast oceans and establish themselves.  The first human colonists of these islands brought with them domestic pigs (Sus scrofa) from island southeast Asia and Polynesian rats (Rattus exulans).  European colonists brought an assortment of other mammals with them nearly 1,000 years later, including domestic goats (Capra hircus), sheep (Ovis aries), cattle (Bos taurus), other types of wild and domestic pigs, cats (Felis catus), rabbits (Oryctolagus cuniculus), rats (R. rattus and R. norvegicus), and mice (Mus musculus).  In the absence of natural predators and competitors, these species became abundant on nearly every island, which caused rapid ecological degradation.  Native plants of the islands were poorly defended against the newly established herbivores, and native wildlife were naïve to tree-climbing predators with teeth.  Species which had never been previously domesticated such as axis deer (Axis axis), European mouflon sheep (O. musimon), and mongooses (Herpestes javanicus) were brought to the islands later and proved to be particularly challenging to manage.  Diseases associated with introduced mammals such as toxoplasmosis (Toxoplasma gondii), bovine tuberculosis (Mycobacterium bovis), and bubonic plague (Yersinia pestis) have all caused major problems for wildlife, livestock, and human health in Hawai‘i.  Invasive mammals have caused the decline and extinction of numerous native plants and animals, but researchers and land managers have developed progressively more effective strategies for managing these species, allowing the recovery and restoration of native species in increasingly larger natural areas.

Many factors have contributed to the decline and extinction of birds in Hawai‘i, not the least of which has been introduced mammalian predators like rats, mongooses, and cats.  These predators take eggs, kill nestlings, or nesting adults, but are also sources of diseases that kill birds.  One such disease known as toxoplasmosis can cause severe developmental disabilities and occasional mortality in humans but can also have lethal consequences for marine mammals.  The infectious agent of the disease, Toxoplasma gondii, is a protozoan, a single-celled organism which behaves like an animal.  It is considered a parasite, causing infection directly rather than by producing toxins.  It is a zoonosis because it is a disease of animals that can also be transmitted to humans.  Only cats –regardless of whether they are domestic or wild species– can support sexual reproduction of this parasite, and thereby serve as the definitive host of the disease.  Any other warm-blooded animal, most commonly rodents, can also carry the parasite but can only serve as an intermediate host.  Intermediate hosts of the parasite and may sometimes be consumed by people, leading to infection.  Known intermediate hosts include feral pigs (Sus scrofa) and mouflon sheep (Ovis musimon), both popular game mammals in Hawai‘i.  Birds can also be intermediate hosts, and populations that have been infected and killed by T. gondii include the critically endangered ‘Alalā (Corvus hawaiiensis), the endangered Nēnē (Branta sandvicensis), Red-footed Booby (Sula sula), and Erckel’s Francolin (Pternistis erckelii), a common gamebird.  Flowing water may transport T. gondii oocysts –hardy, thick-walled, environmentally resistant spores– in runoff from land to streams and then into marine environments.  Thus, T. gondii represents a land-based pathogen that can pollute nearshore marine ecosystems and infect a wide variety of animals in this environment including whales, seals dolphins, and sea otters.  The leading cause of death of the endangered Hawaiian monk seal (Monachus schauinslandi) is now known to be T. gondii infection.  Many aspects of T. gondii are poorly understood, but current research may soon lead to more effective management strategies to protect native wildlife from both toxoplasmosis and predation. 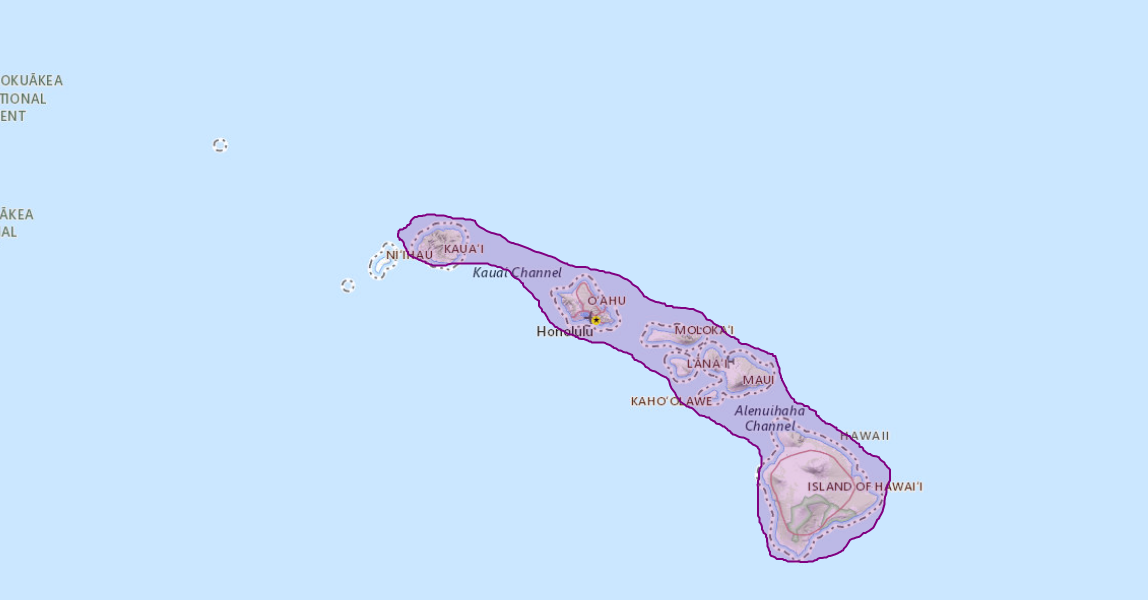 Accidental introductions of rodents present one of the greatest threats to indigenous island biota, especially seabirds. On uninhabited remote islands, such introductions are likely to come from shipwrecks. Here we use a comprehensive database of shipwrecks in Western Alaska to model the frequency of shipwrecks per Aleutian and Bering Sea island, taken as a proxy for the threat of rodent introduct

Conversion of native terrestrial ecosystems in Hawai‘i to novel grazing systems: a review

Federal collaboration in science for invasive mammal management in U.S. National Parks and Wildlife Refuges of the Pacific Islands

Some of the most isolated islands in the Pacific Ocean are home to US National Parks and Wildlife Refuges. These islands are known for flora and fauna that occur nowhere else, but also for invasive species and other factors which have resulted in the disproportionate extinction of native species. The control of invasive mammals is the single most expensive natural resource management activity esse
By
Ecosystems, Pacific Island Ecosystems Research Center
August 18, 2016

Invasive mammals have irreversibly altered ecosystems of Hawai‘i and other tropical Pacific islands in numerous cases through novel herbivory, predation, and diseases, thereby causing the disproportionate extinction of flora and fauna that occur nowhere else on Earth. The control and eradication of invasive mammals is the single most expensive management activity necessary for restoring ecological
By
Ecosystems, Pacific Island Ecosystems Research Center
June 24, 2016

European mouflon sheep (Ovis gmelini musimon) were introduced to Kahuku Ranch on Hawai‘i Island in 1968 and 1974 for trophy hunting and have been detrimental to the native ecosystem by trampling, bark stripping, and browsing vegetation. In 2003, Hawai‘i Volcanoes National Park acquired Kahuku Ranch and managers began removing mouflon. The objective of this project was to determine whether hunting
By
Ecosystems, Pacific Island Ecosystems Research Center
March 16, 2016

The Hakalau Forest Unit (HFU) of Big Island National Wildlife Refuge Complex (BINWRC) has intensively monitored non-native ungulate presence and distribution during surveys of all managed areas since 1988. In this report we: 1) provide results from recent ungulate surveys and the number of removals at HFU to determine the distribution, abundance, and efficacy of removals of feral pigs, the dominan
By
Ecosystems, Pacific Island Ecosystems Research Center
January 29, 2016

Hawai‘i Volcanoes National Park (HAVO) encompasses 1,308 km2 on Hawai‘i Island. The park harbors endemic plants and animals which are threatened by a variety of invasive species. Introduced ungulates have caused sharp declines of numerous endemic species and have converted ecosystems to novel grazing systems in many cases. Local ranchers and the Territorial Government of Hawai‘i had long conducted
By
Ecosystems, Pacific Island Ecosystems Research Center
March 25, 2015

Advances in wildlife telemetry and remote sensing technology facilitate studies of broad-scale movements of ungulates in relation to phenological shifts in vegetation. In tropical island dry landscapes, home range use and movements of non-native feral goats (Capra hircus) are largely unknown, yet this information is important to help guide the conservation and restoration of some of the world’s mo
By
Ecosystems, Pacific Island Ecosystems Research Center
February 1, 2015