The Past Informs the Future

The basic assumption that paleoseismologists use is that what happened in the past will most likely happen again in the future. Therefore, the more information that can be gathered about the past, the better idea we’ll have about what is likely to happen in the future. This is important because we need to be able to design bridges and big buildings to withstand future large earthquakes, and to plan so we can be resilient in the days and years after the big earthquakes occur. This means we need paleoseismologists to collect information about when past earthquakes occurred on faults and how large the earthquakes were.

When it comes to sleuthing for evidence of past earthquakes, there is primary evidence and secondary evidence. Primary evidence includes clues that are created by the movement on the fault during the earthquake such as fault scarps, offset or folded layers of sediment and soil, and parts of the landscape that have been tilted, uplifted, down-dropped, or torn apart. The picture above shows an example of a fault scarp from the relatively small 2014 South Napa earthquake (M6.0). In larger earthquakes, the movement may be bigger. For example, a historic account from the 1857 M7.9 earthquake on the San Andreas Fault in southern California, stated that “This rent was in some places 5-10 yards wide, the earth at times filling it up like ploughed furrows; at others the ground stood apart, leaving a deep fissure.” Secondary evidence includes clues produced by the shaking during the earthquake such as sand blows, rockfalls, landslides, and damaged trees.

Finding these paleoearthquakes requires going to the right place. First, scientists study the landscape to find places where the faults are active. Second, they must go to places where evidence for past earthquakes could be preserved – places where the soil and sediment will cover the fault scarp and preserve it for hundreds to thousands of years. For the most part, paleoseismologists only see evidence for the larger earthquakes, above about a M6, because below that magnitude they are too small to leave a mark on the landscape that is likely to be preserved. Consequently, paleoseismology mostly provides data on the biggest earthquakes with the potential to cause the most damage.

To find direct evidence for a paleoearthquake, first you need to find a fault. The use of lidar (See Down in the Trenches and Up in the Air) in geological investigations has made it much easier to map active faults. Lidar can cover a lot more ground than a few geologists hiking around looking for evidence of past earthquakes, and its ability to “see through” the vegetation also allows coverage in areas where it may be difficult or impossible for scientists to access.

Once you’ve found a fault, you need to be able to see the layers of sediment and soils that have been deposited over time beneath the surface. Usually this requires digging trenches across the fault. In the trench you can see sediments and soils that have come down from nearby hills and are deposited in layers, one on top of the other, like a stack of books. When an earthquake occurs along a fault, the layers are disrupted, bent and offset. As time goes by, new layers are deposited on top. Since layers deposited after the earthquake are not broken, it is clear that the earthquake occurred before they were deposited.

This pattern repeats over the centuries, creating a geological story in the layers and how the sediments are disrupted. Viewing a cross-section of deposits that cross the fault from the surface downward is like reading a timeline backwards from present to past. The job of a paleoseismologist is to unravel the sequence of events revealed in the cross-section.

In addition to trenching, there are some other rather creative techniques for identifying paleoearthquakes. Using dendrochronology, or tree rings, is an interesting way to look for paleoseismic evidence. Trees that were severely shaken, permanently tilted from shaking, or were inundated by salt water from subsidence, will suffer in health and not grow as quickly as usual for a while after an earthquake, or in some instances, the trees could be killed as a result of a large earthquake. The subsequent tree ring for that time period will be thinner than usual. In coastal areas like where this photo was taken, dendrochronology can be used to determine when large paleoearthquakes altered the level of the land: during subduction zone earthquakes some parts of the land surface can lower by several feet. Thus forests with trees going along a coast will suddenly die as the roots of the trees are drowned in salt water.

Determining the Age of a Paleoearthquake

How do you go from the observation of a prehistoric earthquake in the trench wall to the age of an earthquake? You’ll want this information to understand how long ago the most recent paleoearthquake happened, how old the earthquake before that one is, and so on through the sequence of disrupted sediments.

There are many different ways that dates are extracted from samples gathered at paleoearthquake sites. The dating technique that’s familiar to most people, and is the most common, is radiocarbon dating. Radiocarbon dating allows you to determine the age of material that contains carbon, which is almost anything that was once a living plant or animal. Plant remains like seeds and leaves, charcoal from past fires, and shells and soils are all datable materials using radiocarbon.

The use of accelerator mass spectrometry (AMS), which allows you to measure the number of radiogenic carbon isotopes in a sample and determine the age, has lead to improvements in paleoseismology. The big advantage is that new lab techniques can resolve the age of very small samples. This means that a scientist can collect samples the size of a grain of rice from a geologic feature instead of schlepping large, heavy samples from the field to the lab, and the data are even better, as a wide variety of material can be dated. The age of each earthquake is bracketed by dating layers above and below the youngest sediments deformed by the prehistoric earthquake.

Earthquake magnitudes are a reflection of the area of the fault rupture (the length and depth of the fault plane) and the amount of slip, or offset, that occurred on the fault. To estimate the magnitude of prehistoric earthquakes, scientists try to determine the amount of offset to features on the surface such as streams or gullies. The size of the offset is essentially correlated to the size of the earthquake. For example, an M7 will cause the ground to be offset by an average of about 1 meter, while a M7.5 has an average offset of about 2.6 meters. Secondary evidence may also be used to estimate the size of a region that was shaken by the earthquake. For example, the locations of sand blows and other liquefaction features or evidence of earthquake-induced landslides can be mapped across a region to determine the extent and severity of shaking. The pattern of shaking is then compared with the pattern of earthquakes of known magnitudes to determine what magnitude best fits the observations. 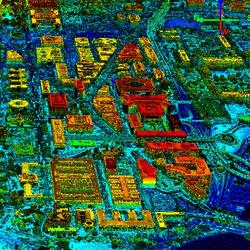 Maps Made with Light Show the Way

The topic, officially, was water. But during a scientific conference in Butte, Montana, in 2013, earthquake expert Michael Stickney glimpsed something unexpected in a three-dimensional lidar image of the Bitterroot Valley in nearby Missoula.
link
January 24, 2017

Maps Made with Light Show the Way

The topic, officially, was water. But during a scientific conference in Butte, Montana, in 2013, earthquake expert Michael Stickney glimpsed something unexpected in a three-dimensional lidar image of the Bitterroot Valley in nearby Missoula.
Learn More
link 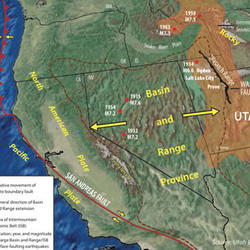 How Big and How Frequent Are Earthquakes on the Wasatch Fault?

Release Date: FEBRUARY 1, 2015 Paleoseismology along the Wasatch Fault in Utah is helping to estimate the shaking risk to nearby towns.
By
Natural Hazards, Earthquake Hazards
link
February 1, 2015

How Big and How Frequent Are Earthquakes on the Wasatch Fault?

Release Date: FEBRUARY 1, 2015 Paleoseismology along the Wasatch Fault in Utah is helping to estimate the shaking risk to nearby towns.
Learn More