What We Know After One Year

In the wee hours of Sunday morning at 3:20am, the residents and wineries of Napa Valley were shaken by a magnitude 6.0 earthquake, the largest in the San Francisco Bay Area in over 25 years, and the first since the M7.9 1906 earthquake to rupture on the surface. Residents in this area feel small earthquakes often, and they generally pause for a moment and then go back to whatever they were doing. But this was no small earthquake, and as the small representative sample of Jawbone© data shows, many residents had trouble going back to sleep after this one.

In the days, weeks and months that followed, scientists collected and analyzed data from instruments that recorded the event. Many others spread out across the Napa Valley and surrounding area to collect additional data such as fault rupture expressed on the ground surface, as well as shaking induced damage to buildings and infrastructure. Data collected from airborne LIDAR were used to look for effects on the ground surface. In addition, airborne and ground-based LIDAR data were collected in areas known to have surface cracks to measure and describe what happened. The following summary is what USGS (and USGS-funded) scientists have learned from the data one year after the earthquake.

First, to put the South Napa earthquake in context, the West Napa fault, which was the causative fault, is part of the large San Andreas Fault Zone (SAFZ) system. The West Napa fault extends along the western margin of the basin that underlies much of Napa Valley. The relative motion on this fault is not well known but thought to be about 1 mm/yr (0.04 in/yr). The SAFZ is not a simple, single fault, but rather a complex collection of smaller fault segments that collectively accommodate the horizontal movement between the North American Plate and the Pacific Plate.

Sometimes a single fault segment will slip and cause an earthquake, and other times many fault segments slip in unison, causing a larger earthquake. The South Napa earthquake included a few small segments that ruptured together to produce the M6 earthquake.. The only other noteworthy earthquake in the Napa area in the recent past (since 1973) was the M4.9 Yountville earthquake on September 3, 2000. The epicenter of that earthquake was 20 km (12 mi) NNW of the South Napa epicenter, and also on the West Napa fault system. In addition, a M3.0 earthquake occurred on August 5, 2014, 19 days before the M6.0, which, in retrospect, some scientists/seismologists might consider a foreshock.

Many California residents have the Did You Feel It? (DYFI) webpage bookmarked, so as soon as the shaking stopped, they started reporting their experience of the shaking on DYFI. Within 1 hour after the earthquake, over 25,000 citizen scientists entered their data on the website, creating a map of the distribution of shaking that they felt. The highest intensities were MMI VII-VIII in the city of Napa and extending a littler farther north. A shaking intensity of VII-VIII is described as strong to severe, and very likely woke up all but the most heavy of sleepers. Ultimately 41,000+ citizens shared their experiences, with the farthest felt report 300 km (186 mi) to the east in Reno, NV. The computed instrumental intensities agreed well with those reported by residents.

The shaking caused some damage to wood-frame houses and significant damage to some commercial buildings in downtown Napa, including the 1870 courthouse. Damage to wood-frame houses was mostly broken or cracked chimneys and failure of cripple walls (see Additional Resources below), short walls in the crawl space between the foundation and the floor. A few homes even shifted off of their foundations, which can be due to the failure of the cripple walls, which drop the floor to the foundation and sometimes allow houses to slide off the foundation.

Some residents noticed a difference in the amount of water being discharged from natural springs. The change occurred within 1 hour after earthquake, but the discharge amount returned to normal within a few days. This is not an unusual phenomenon in areas with natural springs and geothermal features. The shaking causes the shifting of below-surface features that may temporarily (and sometimes permanently) change the flow from a spring or even stop the flow. When the pressure adjusts and equilibrates with the water table, the flow will often return. For further details, see Groundwater Effects from Earthquakes.

Scientists found that some of the fault segments that ruptured on the morning of August 24 had been previously mapped as part of the West Napa fault system, but the rupture also extended northward where no faults had been mapped before. The length of the rupture was about 12.5 km (8 mi), and scientists measured up to 46 cm (18 in) of slip. No other surface features were found, such as evidence of liquefaction or landslides. This lack of ground failure was attributed to the lack of rainfall in the area; a shallower water table would have made the surface material less stable and more prone to ground failure.

Shallow slipping across the fault, known as afterslip, continued after the mainshock and lasted for several months. Afterslip is a slow movement on the fault, and it is yet unclear whether it is associated with, or independent of, the aftershocks. An additional 14+ cm (5.5+ in) of slip was measured during the first 24 hours, and up to 20 cm (8 in) after 48 hours, mainly on southern half of the main fault strand. Afterslip causes additional damage to manmade structures, such as roads, but does not release seismic waves and cause shaking.

Inspection of the buildings after the earthquake yielded 100+ red-tagged structures, meaning immediate rehabitation is too dangerous. Engineers and scientists determined that the worst-damaged buildings resulted from a combination of:

This earthquake was unusual for its size, because it had a relatively long surface rupture of 12.5 km (8 mi) with a significant amount of surface slip (up to 46 cm; or 18 in). It also had a large amount of afterslip, and fewer aftershocks than average for an earthquake of its size. However, knowledge gained provides new insights into the influence of the sedimentary basin under the Napa area, which can be used in future hazard maps to more accurately forecast earthquake hazards in the area. 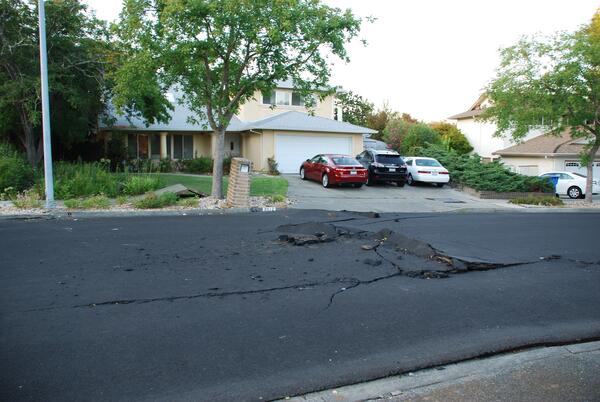 A new U.S. Geological Survey-led study suggests that earthquake-related deformation just below the Earth's surface can be quite different from how it...

One year ago, the largest earthquake in over 25 years hit the San Francisco Bay Area, causing significant damage in California’s famous Napa Valley...

Scientists gather at USGS to discuss findings from Napa quake

Five months after the South Napa earthquake, scientists gathered on Wednesday at the U.S. Geological Survey to talk about...

Members of the news media are invited to attend a scientific briefing at the U.S. Geological Survey to summarize what has been learned about and from...

This release of information serves as an updated summary of U.S. Geological Survey information as it relates to the current understanding of the South...

Update on the Magnitude 6 South Napa Earthquake of August 24, 2014

Yesterday at 3:20 AM local time, the northern San Francisco Bay Area was struck by the largest earthquake to impact the Bay Area since the 1989 M6.9...