The USGS Land Change Monitoring, Assessment and Projection (LCMAP) team has released its reference dataset for the Conterminous U.S. (CONUS), an 25,000-point trove of land cover data that represents the culmination of nearly five years of intensive human labor.

A reference dataset is a tool used to check a land cover map’s accuracy, and as an input for estimating annual land cover area and rates of change. The LCMAP version is unlike any produced before – designed for a set of maps that track land cover and land change for every 30-by-30-meter plot of land in CONUS across more than three decades.

“There is no other dataset that I’m aware of that spans a 30-year record tied to single points on the ground,” said Jesslyn Brown of the USGS Earth Resources Observation and Science (EROS) Center and head of the LCMAP team. “It’s an impressive effort, and it’s really unprecedented.”

The dataset was assembled by over a dozen human interpreters from the USGS and the U.S. Forest Service (USFS), who analyzed and classified 25,000 pixels of USGS Landsat spectral data.

The interpreters used each pixel’s spectral history over time, as well as ancillary data sources such as high-resolution aerial imagery, precipitation and forest cover data layers. They then sorted each pixel into one of eight land cover classes (e.g. developed, cropland, wetland) for each of the 33 years covered by the LCMAP initiative’s Collection 1 product suite.

The analysis started with an interpretation tool called TimeSync, developed for the job by the USFS.

The dataset’s primary purpose is to check the accuracy of LCMAP’s primary and secondary land cover products, which characterize the landscape annually from 1985-2018 at 30-meter resolution, as well as for developing statistically-sound estimates of land cover area and land cover change rates.

The quality and accuracy assessment it enabled can help researchers decide if LCMAP products are right for their project.

“If you know that a land cover dataset has 90.2 percent accuracy in forests, and it’s 92.1 percent in the East region, where your area of interest is, you know it’s a good dataset for you,” said Bruce Pengra, an EROS contractor and remote sensing scientist who served as a senior interpreter.

Because of its scope and the detailed documentation that accompanies it, however, the reference dataset has piqued the interest of multiple other remote sensing scientists. It promises to offer insight and guidance for a host of land change projects, both in the U.S. and around the globe.

It has already been used for validation work on the National Land Cover Database, and has been shared with Boston University, an LCMAP collaborator working to create a global reference dataset. The reference dataset can also serve to improve land cover mapping, serving as a measure of “ground truth” for other machine learning algorithms designed to classify land cover.

“There’s a whole lineup of people who want to get their hands on it,” Brown said. “It really is a great accomplishment for the USGS and the U.S. Forest Service.”

The reference dataset is available to the public on ScienceBase. The LCMAP Collection 1 product suite is scheduled for release later this year. 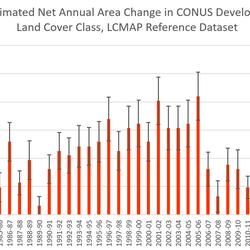 The USGS Land Change Monitoring, Assessment, and Projection (LCMAP) initiative focuses on the creation of annual map products and the application of those products to advance the understanding of land surface change for the scientific community, the land management community, and the general public.Both the map products and the work performed to validate them offer insight into the multitude of...
Learn More