The following topics provide background on some of the scientific issues regarding droughts.

This page offers some questions and answers about the hydrology of droughts. This information is from the USGS MD-DE-DC Water Science Center's drought FAQs.

What is a drought?

While it is relatively easy to define what a hurricane or earthquake is, defining a drought is more subjective. Droughts do not have the immediate effects of floods, but sustained droughts can cause economic stress throughout an area. The word "drought" has various meanings, depending on a person's perspective. To a farmer, a drought is a period of moisture deficiency that affects the crops under cultivation—even two weeks without rainfall can stress many crops during certain periods of the growing cycle. To a meteorologist, a drought is a prolonged period when precipitation is less than normal. To a water manager, a drought is a deficiency in water supply that affects water availability and water quality. To a hydrologist, a drought is an extended period of decreased precipitation and streamflow.

The amount of rain and snow also varies with the seasons. In Georgia, most of the yearly precipitation falls during winter, early spring, and in July. Even if the total amount of rainfall for a year is about average, rainfall shortages can occur during a period when moisture is critically needed for plant growth, such as in the early summer.

When little or no rain falls, soils can dry out and plants can die. When rainfall is less than normal for several weeks, months, or years, the flow of streams and rivers declines, water levels in lakes and reservoirs fall, and the depth to water in wells increases. If dry weather persists and water-supply problems develop, the dry period can become a drought (Moreland, 1993).

When does a drought begin?

The beginning of a drought is difficult to determine. Several weeks, months, or even years may pass before people know that a drought is occurring. The end of a drought can occur as gradually as it began. Dry periods can last for 10 years or more. During the 1930's, most of the United States was much drier than normal. In California, the drought extended from 1928 to 1937. In Missouri, the drought lasted from 1930 to 1941. That extended dry period produced the "Dust Bowl" of the 1930's when dust storms destroyed crops and farms.

The first evidence of drought usually is seen in records of rainfall. Within a short period of time, the amount of moisture in soils can begin to decrease. The effects of a drought on flow in streams and reservoirs may not be noticed for several weeks or months. Water levels in wells may not reflect a shortage of rainfall for a year or more after a drought begins (Moreland, 1993).

Does a shortage of rain mean that a drought will occur?

Why doesn't a drought go away when it rains?

Rainfall in any form will provide some drought relief. A good analogy might be how medicine and illness relate to each other. A single dose of medicine can alleviate symptoms of illness, but it usually takes a sustained program of medication to cure an illness. Likewise, a single rainstorm will not break the drought, but it may provide temporary relief.

A light to moderate shower will probably only provide cosmetic relief. It might make folks feel better for awhile, provide cooling, and make the vegetation perk up. During the growing season, most of the rain that falls will be quickly evaporated or used by plants. Its impact is short term.

A thunderstorm will provide some of the same benefits as the shower, but it also may cause loss of life and property if it is severe. Thunderstorms often produce large amounts of precipitation in a very short time, and most of the rain will run off into drainage channels and streams rather than soak into the ground. If the rain happens to fall upstream of a reservoir, much of the runoff will be captured by the reservoir and add to the available water supply. No matter where the rain falls, stream levels will rise quickly and flooding may result. Also, because the rainfall and runoff can be intense, the resulting runoff can carry significant loads of sediment and pollutants that are washed from the land surface.

Soaking rains are the best medicine to alleviate drought. Water that enters the soil recharges ground water, which in turn sustains vegetation and feeds streams during periods when it is not raining. A single soaking rain will provide lasting relief from drought conditions, but multiple such rains over several months may be required to break a drought and return conditions to within the normal range.

Tropical storm rains are usually of the soaking variety, although they may also be intense such as during a thunderstorm and lead to some of the same problems. Tropical storms often produce more total rainfall than a "regular" soaking rain and can provide longer relief than a single soaking rain. However, tropical rains may also be of such intensity that they exceed the capacity of soil to absorb water and often result in significant runoff and flooding. Tropical rains can help to fill water-supply reservoirs and provide long-term drought insurance. If significant rainfall does not occur upstream of reservoirs, the drought relief aspects of tropical storms may be of only little consequence. All things considered, a single tropical storm at the right place, at the right time, and with the right amount of rainfall can break a drought.

Considering all of the above, even when a drought has been broken it may not be truly over. The benefits of substantial rainfall such as from a tropical storm may last for months, but a return to normal rainfall patterns and amounts is necessary for conditions in streams, reservoirs, and ground water to also return to normal (Moreland, 1993).

Can drought affect the water level in wells?

Groundwater, which is found in aquifers below the surface of the Earth, is one of the Nation's most important natural resources. Groundwater is used to provide a large portion of the Nation's population with drinking water, it provides business and industries water for their purposes, and is used extensively for irrigation.

The water level in the aquifer that supplies a well does not always stay the same. Droughts, seasonal variations in rainfall, and pumping affect the height of the underground water levels. If a well is pumped at a faster rate than the aquifer around it is recharged by precipitation or other underground flow, then water levels in the well can be lowered. This can happen during drought, due to the extreme deficit of rain. The water level in a well can also be lowered if other wells near it are withdrawing too much water.

Below are other science projects associated with drought. 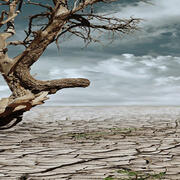 Groundwater decline is a real and serious problem in many places of the Nation and the world. When rainfall is less than normal for several weeks, months, or years, the flow of streams and rivers declines, water levels in lakes and reservoirs fall, and the depth to water in wells increases.
By
Water Resources
link
June 6, 2018

Groundwater decline is a real and serious problem in many places of the Nation and the world. When rainfall is less than normal for several weeks, months, or years, the flow of streams and rivers declines, water levels in lakes and reservoirs fall, and the depth to water in wells increases.
Learn More
link 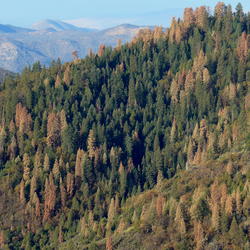 USGS WERC's Dr. Phil van Mantgem and his collaborators are using plot-based methods to describe change and vulnerability to drought in the forests of the western United States. A focus of this work is the installation and maintenance of large (1 ha) monitoring plots. Many other vegetation monitoring strategies are based on small (0.1 ha) plots, which may not be sufficient to detect changes in...
By
Ecosystems, Land Management Research Program, Status and Trends Program, Western Ecological Research Center (WERC)
link
October 30, 2017

USGS WERC's Dr. Phil van Mantgem and his collaborators are using plot-based methods to describe change and vulnerability to drought in the forests of the western United States. A focus of this work is the installation and maintenance of large (1 ha) monitoring plots. Many other vegetation monitoring strategies are based on small (0.1 ha) plots, which may not be sufficient to detect changes in...
Learn More
link 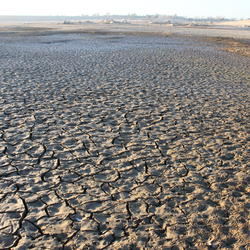 Below are data or web applications associated with drought.

Where in the Nation are droughts or very low flows occurring now? How can I see these sites on a map and get to the data?

Where in the Nation are droughts or very low flows occurring now? How can I see these sites on a map and get to the data?