Water Quality Data for the Nation

Source of pharmaceuticals in streams

The source of pharmaceuticals in water is not just from manufacturing plants. You probably know that antibiotics and drugs are used in the livestock industry, and for streams receiving runoff from animal-feeding operations, pharmaceuticals such as acetaminophen, caffeine, cotinine, diphenhydramine, and carbamazepine, have been found in USGS studies. Another source of pharmaceuticals in stream water is you and me. Essentially, drugs that people take internally are not all metabolized in the body, and the excess ends up in our wastewater leaving homes and entering the sewage-treatment plants. It might sound surprising that these drugs could be detected in streams miles downstream from wastewater-treatment plants, but many plants do not routinely remove pharmaceuticals from water.

Listen up!
The USGS has a couple of podcasts about pharmaceuticals and the aquatic environment to help you learn about this problem:

Here is a transcript of one of them:

The USGS South Atlantic Water Science Center has released a podcast titled "Emerging Contaminants, Pharmaceuticals in South Carolina Rivers and Streams". USGS Research Ecologist Dr. Paul Bradley discussed with Ray Douglas the USGS Toxic Substances Research on emerging contaminants in rivers and streams; the information is pertinent to all of the United States, not just South Carolina. Below is a transcript of the podcast.

Dr. Paul Bradley: "There is little doubt that these compounds have been present in the environment for decades and perhaps even more. It's possible that there have been long term ecological consequences that are reaching a critical stage. So while these releases are sometimes alarming. You know, having the information is better than not having the information."

Today on our program, Emerging Contaminants, Pharmaceuticals in South Carolina's Rivers and Streams. I am Ray Douglas and this is Water Science for a changing world.

Bradley: "And so we need to begin to correct this problem, we certainly need to understand it. So it is good that this information is coming out, and to do that we have to have release of new information."

Douglas: Joining us today is Dr. Paul Bradely. Dr. Bradley is a USGS Research Ecologist in the South Carolina Water Science Center. Paul, thanks for joining us today.

Bradley: Emerging contaminants is kind of this umbrella term that refers loosely to a wide variety of contaminants which presence in the environment has long been suspected, but which we have only recently verified due to improvements in analytical techniques. The emerging contaminants umbrella covers several broad classes of contaminant compounds that are loosely categorized according to their ecological impacts or their intended function, or their sources. These can include: pharmaceuticals and personal care products, organic wastewater compounds, antimicrobials, antibiotics, animal and human hormones, endocrine disrupting compounds, as well as a variety of domestic and industrial detergents. The critical thing to remember about all of these contaminants is, is that what's emerging about them is our awareness of their potential environmental impacts in the environment and our ability to actually detect the compounds. There is no doubt that many of these contaminants have been in the environment for a long time.

Douglas: Well can you give an idea of where they are, and how common they are in the environment?

Bradley: Well the USGS Toxic Substances Hydrology Program has been conducting a variety of national surveys over the past decade. And the results of these various studies indicates that, that  emerging contaminants are actually widespread in the environment and they are found in rivers and streams across the nation. They are also found in groundwater systems. Not surprisingly you tend to have them in higher frequency near urban centers, but you also find them in rural areas where there is no readily obvious source for them.

Douglas: So, where are they coming from?

Bradley: Well ultimately, they are coming from us. Most of these compounds are produced either naturally or largely manufactured for use in and by people. For health applications like drugs, antibiotics synthetic hormones, you know for personal and domestic use like perfumes, antibacterial soaps and detergents. Everyday ingredients in products, domestic and industrial products. For farming applications, antibiotics and hormones are commonly used in cattle and in livestock operations. So given the wide range of emerging contaminants and the wide range of sources and uses, obviously there are a number of different ways that they can end up getting into the environment, and into the streams and rivers in particular. The obvious source, and the one most people pay attention too is via the human waste stream and municipal wastewater treatment facility outfalls directly into stream systems.

Certainly this is the one most people are aware of but there are a number of other sources out there, for example, industrial wastewater treatment plants also release emerging contaminants into rivers and streams. Septic systems, privately owned septic systems, for example are releasing emerging contaminants into the groundwater system and depending on how close the groundwater system and the release point is to a surface waster body, this groundwater contamination can make its way to rivers and streams. Animal operations, particularly so-called "concentrated animal feed operations," are another poorly recognized but certainly a major concern to the scientific community. Because in contrast to the human waste stream which is fairly closely monitored, animal waste stream is not monitored, and we expect that the contribution to the environment from this source is going to be major, perhaps even greater than the wastewater treatment plants.

Douglas: The wastewater treatment plants, aren't they supposed to be removing the compounds?

Douglas: Well based on your findings so far should the concern rest more for the fish, or for us, the general population?

Bradley: Well at this point the primary concern, has got to be for aquatic wildlife like fish. Because many of these compounds are obviously produced for function in human beings, the presence of these compounds in rivers, in streams or even worse in drinking water supplies is obviously a matter of deep concern for a lot of people. But it's important to remember people don't actually live in rivers or streams and the concentrations for example, of pharmaceuticals that are being observed in drinking water supplies, are in fact much, much, much lower than their therapeutic dose. That is, the concentration that they were intended to work in human beings. On the other hand, fish and other aquatic wildlife do live in rivers and they're much more vulnerable to certain types of emerging contaminants. For example, endocrine disrupting compounds, can alter the hormone system of fish, resulting in changes in secondary sexual characteristics and potentially resulting in reproductive failure. There has been a recent study reported done for example that is getting a lot of attention which reports that some popular sport fish like largemouth and smallmouth bass, are exhibiting female characteristics even in the male fish, and this phenomenon appears to be widespread in rivers and stream across the U.S.. and this study included two rivers in South Carolina, the Pee Dee River and the Savannah river and this kind of sexual alteration was observed in both of these rivers.

Douglas: Well as individuals what can we to help with this problem?

Bradley: Well we can change our behavior to be more environmentally friendly. Whether that means disposing of drugs properly, ie. don't throw them down the toilet or flush them down the drain. Buying products that are safer for the environment more biodegradable products. Or perhaps getting involved at the community level in order to improve environmental protection.

Douglas: Well I do believe that there are several states that have begun these drug take back events where you can drop off your unused or outdated pharmaceuticals for proper disposal. Is that really helpful or is there something more that we can be doing, or is the problem just going to get worse before it gets better?

Bradley: Well In a general sense, we need to start managing the release of emerging contaminates into the environment. It is kind of important to look at this problem in a historical perspective. And understand that controlling the release of human waste into rivers and streams is something that we have been doing for many years now. Actively managing waste releases to streams is something that we have been doing for more than a century. And in general how we do this is by treating the waste stream until it can be released safely into the environment at which point degradation processes that occur naturally in the environment continue to reduce the concentrations of contaminants and finish the cleaning process. So the existing wastewater treatment approach is to balance the release with the naturally occurring capacity to assimilate and attenuate the contamination in the environment. So we need to take that same type of approach with emerging contaminants.

Now because emerging contaminants are a new problem, from a wastewater treatment standpoint, we need to go out and identify exactly what concentrations are safe in the environment. So for example, with the endocrine disrupting compounds and the the impacts that they are having on fish. We need to identify safe concentrations, concentrations at which these harmful effects are not going to occur. And then the second thing we need to do is, we need to continue to study our river systems and identify and characterize those processes that can help us clean up any contaminants that are actually released into the stream. We need to understand the rates at which these, these natural processes occur and how effectively   they are occurring. And then the final thing we will probably need to do is we will need to adjust our treatment processes in the facilities so that we can actually lower the concentration and bring those releases into balance with the naturally occurring processes.

Douglas: Paul, Thanks for sharing with us today and it's certainly good to know that USGS research is helping us better understand and eventually correct this problem.

Douglas: We've been talking with Dr. Paul Bradley, USGS Research Ecologist in the South Carolina Water Science Center. For more information on this program visit us on the web at sc.water.usgs.gov

Dr. Paul Bradley: So we need to begin to correct this problem, we certainly need to understand it, so it's good that this information is coming out, and it is also good that we continue to study the problem so that we can assess the potential to manage the problem and to clean up any contamination that exists in the environment now and prevent future contamination. And to do that we have to have release of new information. So while these releases are sometimes alarming you know having the information is better than not having the information." 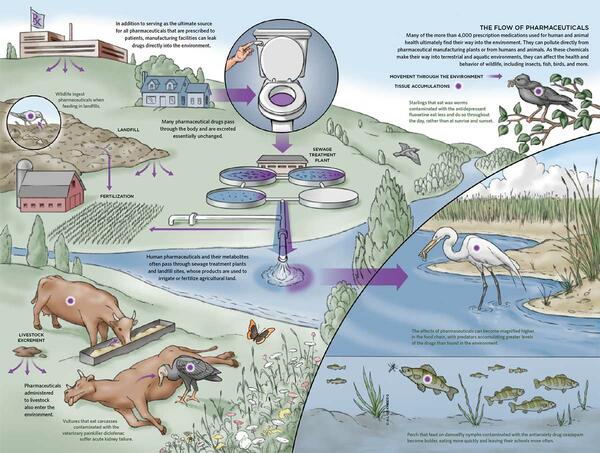