Rivers? Streams? Creeks? These are all names for water flowing on the Earth's surface. Whatever you call them and no matter how large they are, they are invaluable for all life on Earth and are important components of the Earth's water cycle.

Rivers? Streams? Creeks? They are all names for water flowing on the Earth's surface. As far as our Water Science site is concerned, they are pretty much interchangeable. I tend to think of creeks as the smallest of the three, with streams being in the middle, and rivers being the largest.

Most of the water you see flowing in rivers comes from precipitation runoff from the land surface alongside the river. Of course, not all runoff ends up in rivers. Some of it evaporates on the journey downslope, can be diverted and used by people for their uses, and can even be lapped up by thirsty animals. Rivers flow through valleys in the landscape with ridges of higher land separating the valleys. The area of land between ridges that collects precipitation is a watershed or drainage basin. Most, but not all, precipitation that falls in a watershed runs off directly into rivers - part of it soaks into the ground to recharge groundwater aquifers, some of which can then seep back into riverbeds.

What is a river?

A river forms from water moving from a higher elevation to a lower elevation, all due to gravity. When rain falls on the land, it either seeps into the ground or becomes runoff, which flows downhill into rivers and lakes, on its journey towards the seas. In most landscapes the land is not perfectly flat—it slopes downhill in some direction. Flowing water finds its way downhill initially as small creeks. As small creeks flow downhill they merge to form larger streams and rivers. Rivers eventually end up flowing into the oceans. If water flows to a place that is surrounded by higher land on all sides, a lake will form. If people have built a dam to hinder a river's flow, the lake that forms is a reservoir.

The phrase "river of life" is not just a random set of words. Rivers have been essential not only to humans, but to all life on earth, ever since life began. Plants and animals grow and congregate around rivers simply because water is so essential to all life. It might seem that rivers happen to run through many cities in the world, but it is not that the rivers go through the city, but rather that the city was built and grew up around the river. For humans, rivers are diverted for flood control, irrigation, power generation, public and municipal uses, and even waste disposal.

Where does the water in rivers come from?

The most simplistic answer is that all the water in a river comes from the sky—and that is certainly true, as streamflow is one part of the water cycle. It is also true that most of the water flowing in rivers comes from precipitation runoff from the surrounding landscape (watershed).

But, the water in a river doesn't all come from surface runoff. Rain falling on the land also seeps into the Earth to form groundwater. At a certain depth below the land surface, called the water table, the ground becomes saturated with water. If a river bank happens to cut into this saturated layer, as most rivers do, then water will seep out of the ground into the river. Groundwater seepage can sometimes be seen when water-bearing layers emerge on the land surface, or even on a driveway!

Look at the diagram below. The ground below the water table (the blue area), is saturated, whereas the ground above (the gray area) is not. The top layer (unsaturated soil/rock material) is usually wet, but not totally saturated. Saturated, water-bearing materials often exist in horizontal layers beneath the land surface. Since rivers, in time, may cut vertically into the ground as they flow, the water-bearing layers of rock can become exposed on the river banks. Thus, some of the water in rivers is attributed to flow coming out of the banks. This is why even during droughts there is usually some water in streams.

Where does the water in rivers go?

Like everything else on (and in) the Earth, water obeys the rules of gravity and tries to get to the center of the Earth (did you imagine that every molecule in your body is trying to do this, also?). So, the water in rivers flows downhill, with the ultimate goal of flowing into the oceans, which are at sea level. River water may end up in a lake or reservoir, in a pipe aimed at Farmer Joe's corn stalks, in a local swimming pool, or in your drinking glass, but much of it eventually ends up back in the oceans, where it rejoins the water cycle, which is ALWAYS in progress.

One river that doesn't participate anymore in this natural water-cycle process is the mighty Colorado River, flowing from Colorado to the Gulf of California in Mexico. The Colorado River certainly starts out as mighty—mighty enough to have carved out the Grand Canyon—but nowadays it does not even end as a trickle. Whereas it once flowed into a large marshy area at the Gulf of California, today it literally disappears in the farmlands at the base of the Sierra de Juarez Mountains in Mexico. As the Colorado River flows through the desert Southwest, it gets used and used by millions of thirsty residents and for crop irrigation; used until there is nothing left. In this satellite view of the "exit point" of the Colorado River, the river itself is the dark blue patch at the top.

Activity icon made by Eucalyp from www.flaticon.com

Below are other science topics associated with rivers, streams, and creeks. 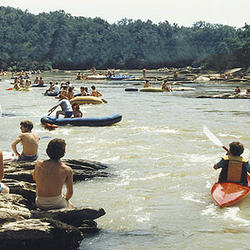 What is streamflow? How do streams get their water? To learn about streamflow and its role in the water cycle, continue reading.
link
June 12, 2019

What is streamflow? How do streams get their water? To learn about streamflow and its role in the water cycle, continue reading.
Learn More
link 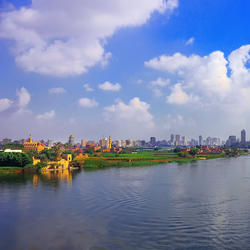 Ever wondered about what is the longest river in the world? Or in the United States? Find out here.
link
June 11, 2018

Ever wondered about what is the longest river in the world? Or in the United States? Find out here.
Learn More
link 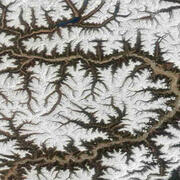 Creeks and streams begin their lives as smaller water bodies that run downhill until they merge to form bigger rivers. Rivers are a mighty factor when it comes to shaping the physical landscape — just ask the Grand Canyon. Find out more here.
link
June 6, 2018

Creeks and streams begin their lives as smaller water bodies that run downhill until they merge to form bigger rivers. Rivers are a mighty factor when it comes to shaping the physical landscape — just ask the Grand Canyon. Find out more here.
Learn More

Below are publications associated with rivers, streams, and creeks.