The chemical and physical characteristics of volcanic rocks can be studied during times of continuous eruption to help scientists better understand changes occurring within the volcano. This is called petrologic monitoring and is best used when combined with real-time and near-real-time data (such as seismic, deformation, and gas).

In order for this application of volcano monitoring to be useful in forecasting events during a volcanic crisis, fresh samples must be collected very shortly after they've been erupted. However, it can take several days to analyze samples, so these methods cannot typically be relied upon to assist in very short-term (i.e., hourly or daily) eruption forecasting. Yet, petrologic monitoring does inform volcanologists about conditions in the magma storage region (e.g., temperature, viscosity, depth, gas content) and about how fast the magma is rising. Such factors are important in determining the how explosive the volcano may be.

For a prolonged eruption (e.g., one lasting many weeks to years), petrologic monitoring has a key role in detecting changes that may indicate that new magma is entering into the volcanic system and in helping to forecast the end of an eruption.

Petrologic monitoring can only be carried out on fresh, newly erupted material that is being delivered to the surface for the first time – called juvenile rocks. Some volcanic eruptions, like steam explosions, occur due to high pressures in a shallow hydrothermal system and bring only older rocks, termed lithics, to the surface. Products from some eruptions can include both juvenile and lithic components, but only the juvenile components will help scientists to understand the current eruption.

During the 1980-1986 eruption period, samples were collected during, or just after, explosive and lava dome eruptive events and the rocks were analyzed to determine changes in the chemical composition and extent of crystallization over time. The results indicated that the gas-rich magma responsible for the 1980 explosive eruption came from a magma storage region at approximately 8 km (5 mi) deep. The subsequent 1980-1986 dome-forming eruptions originated from magma that was left over from the explosive eruption, and it was slowly cooling and crystallizing within the conduit as it moved toward the surface.

Samples of 2004-2008 Mount St. Helens domematerial were taken using a dredge bucket suspended beneath a helicopter. The results of chemical and textural analyses showed that the magma erupting to form the lava spines within the crater contained very little gas. And unlike the results from the 1980s, the 2004-2008 magma was continuously ascending and losing its gas (and therefore its capability to erupt explosively) on the way to the surface from the top of the magma reservoir at about 5 km (3 mi) depth below the volcano. Tephra samples were also collected in buckets that were located in many locations over a large area around the volcano. Careful analysis of these samples suggested that the 2004-2008 magma was nearly identical to the 1980s magma. However, before erupting it mixed with a slightly different batch of magma that was either not tapped in the 1980's or arrived into the system before the 2004-2008 eruption cycle began. 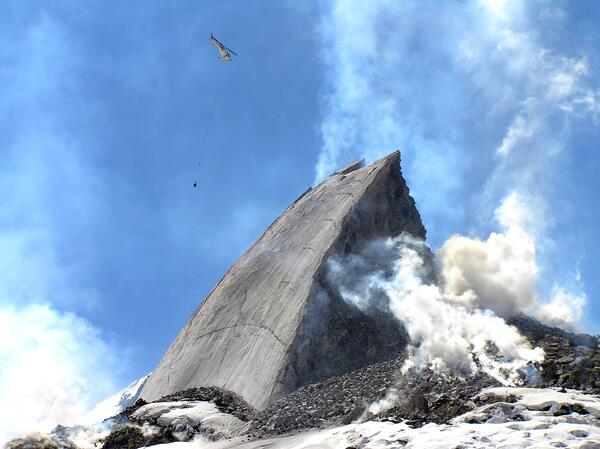 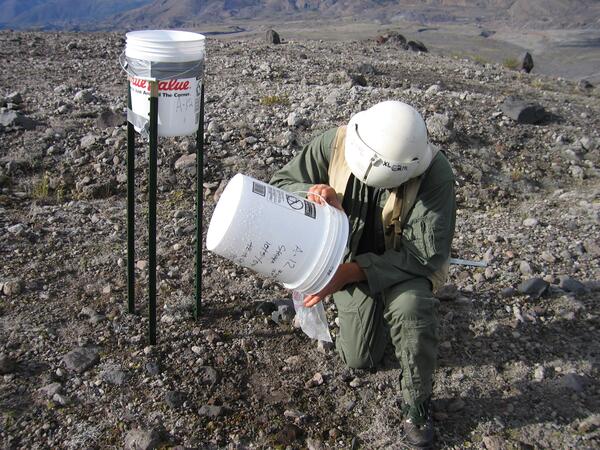