Withdrawal estimates for each category represent the total amount of water removed from the water source, regardless of how much of that total is consumptively used. In most cases, some fraction of the total withdrawal will be returned to the same or a different water source after use and is available for other withdrawals.

38 billion gallons of water withdrawals per day were distributed among 8 categories.  The 58 counties in California use differing proportions of water sources in the 8 (or less) categories.

Public supply refers to water withdrawn by public and private water suppliers that provide water to at least 25 people or have a minimum of 15 connections. Public-supply water is delivered to users for domestic, commercial, and industrial purposes, and also is used for public services, such as pools, parks, and firefighting.

Aquaculture water use is associated with raising organisms that live in water—such as finfish and shellfish—for food, restoration, conservation, or sport. Aquaculture production occurs under controlled feeding, sanitation, and harvesting procedures primarily in ponds, flow-through raceways, and, to a lesser extent, cages, net pens, and tanks. Aquaculture ponds, raceways, and tanks usually require the withdrawal or diversion of water from a ground or surface source. Most water withdrawn or diverted for aquaculture production is used to maintain pond levels and/or water quality. Water typically is added for maintenance of levels, oxygenation, temperature control, and flushing of wastes.

Industrial water use includes water used for such purposes as fabricating, processing, washing, diluting, cooling, or transporting a product; incorporating water into a product; or for sanitation needs within the manufacturing facility. Some industries that use large amounts of water produce such commodities as food, paper, chemicals, refined petroleum, or primary metals.

Mining water use is water used for the extraction of naturally occurring minerals including solids (such as coal, sand, gravel, and other ores), liquids (such as crude petroleum), and gases (such as natural gas). Also includes uses associated with quarrying, milling, and other preparations customarily done at the mine site or as part of a mining activity. Does not include water associated with dewatering of the aquifer that is not put to beneficial use. Also does not include water used in processing, such as smelting, refining petroleum, or slurry pipeline operations. These processing uses are included in industrial water use.

Livestock withdrawals include water for livestock watering, feedlots, dairy operations, and other on-farm needs. Types of livestock include dairy cows and heifers, beef cattle and calves, sheep and lambs, goats, hogs and pigs, horses and poultry.

Domestic water use is for indoor household purposes such as drinking, food preparation, bathing, washing clothes and dishes, flushing toilets, and outdoor purposes such as watering lawns and gardens. Domestic water use includes potable and non-potable water provided to households by a public water supplier (domestic deliveries) and self-supplied from wells or other private sources. 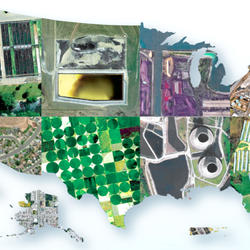 Water Use in the United States

The USGS works in cooperation with local, State, and Federal agencies to collect water-use information, then compiles these data to produce water-use information aggregated at the county, state, and national levels. Every five years, data at the county level are compiled into a national water-use data system and State-level data are published in a national circular, Estimated Use of Water in the...
By
Water Resources, Water Availability and Use Science Program
link
March 4, 2019

Water Use in the United States 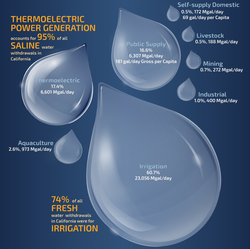 The U.S. Geological Survey's National Water-Use Information Program compiles the nation's water-use data at the county, state, and national levels. USGS five-year reports on national and state water-use estimates between 1950-2015 are posted on the web at: http://water.usgs.gov/watuse/. USGS water-use data for states and counties for 1985-2015 are available at: http://waterdata.usgs.gov/nwis/wu.
By
California Water Science Center
link
June 19, 2018

The U.S. Geological Survey's National Water-Use Information Program compiles the nation's water-use data at the county, state, and national levels. USGS five-year reports on national and state water-use estimates between 1950-2015 are posted on the web at: http://water.usgs.gov/watuse/. USGS water-use data for states and counties for 1985-2015 are available at: http://waterdata.usgs.gov/nwis/wu.
Learn More

County fresh-water withdrawal water use allocated to relevant land uses in the United States: 1985 to 2010