Groundwater is the sole source for water use to the rural community and two Native American tribes in the Cahuilla Valley and Terwilliger Valley groundwater basins, which are located approximately 35 miles southwest of Palm Springs, California. The characteristics and sustainable yield of the basins are not well understood and are threatened by increasing water use and potential changes in water sustainability related to climate change. The study area encompasses the rural community in and around the town of Anza, the Cahuilla Band of Indians Reservation, and the Ramona Band of Cahuilla Reservation; it is located in the headwaters of the Santa Margarita River Watershed in Riverside County. The hydrologic system of this area comprises a fractured bedrock aquifer and an alluvial aquifer. Interactions between these aquifers are not fully understood and the increase in groundwater use has raised concerns of potential changes in water sustainability.

The size and characteristics, current conditions, vertical changes in water quality, and water balance of the aquifer system in the Anza-Terwilliger area are poorly understood. It is important to better understand these characteristics of the aquifer system so that water managers in the area can develop groundwater management and monitoring plans for the area to enable prudent future management of the water resources.

The U.S. Geological Survey, in cooperation with the High Country Conservancy and Rancho California Water District, undertook a study from July 2013 through May 2014. The objectives of the Anza–Terwilliger groundwater study were

Inversion of gravity data, including new data collected for this study, was done to estimate the thickness of the alluvial deposits that form the Cahuilla and Terwilliger groundwater basins and to understand the geometry of the underlying basement complex. After processing the gravity data, the thickness of the alluvial aquifer materials was modeled by using all available lithology, density, and geophysical data.

Analysis of more than 900 drillers’ logs indicated that in areas having relatively thick alluvium, particularly along the San Jacinto fault zone and in the Terwilliger Valley, the alluvium is predominantly composed of sands and gravels. Fine-textured sediments appeared to be discontinuous rather than forming laterally extensive, low-permeability layers. More than 500 drillers’ logs indicated only bedrock is present, indicating that the fractured bedrock is an important source of groundwater, primarily for domestic use, in the study area. The depths of the holes drilled into the bedrock indicated that fractures potentially supplying water to wells persist in the upper few hundred feet and that the permeable zone of the fractured bedrock extends to depths greater than weathered zones in the upper part of the basement complex.

Water-level data were collected from 59 wells during fall 2013. These data indicated that hydraulic head did not vary substantially with well depth and that the measured water levels in bedrock and alluvium were similar. Large offsets in groundwater altitude across the San Jacinto fault zone indicated that the fault zone is a barrier to groundwater flow in the northeastern part of the Anza Valley.

On the basis of data from 33 wells, water levels mostly declined between the fall of 2006 and the fall of 2013; the median decline was 5.1 feet during this period, for a median rate of decline of about 0.7 feet/year. Based on data from 40 wells, water-level changes between fall 2004 and fall 2013 were variable in magnitude and trend, but had a median decline of 2.4 feet and a median rate of decline of about 0.3 feet/ year. These differences in apparent rates of groundwater-level change highlight the value of ongoing water-level measurements to distinguish decadal, or longer term, trends in groundwater storage often associated with climatic variability and trends. Fifty-four long-term hydrographs indicated the sensitivity of groundwater levels to climatic conditions; they also showed a general decline in water levels across the study area since 1986 and, in some cases, dating back to the 1950s.

A total of 1,812 well logs were identified in the study area. A gap in data is observed in the middle of the basin due to the location of the Cahuilla Indian Reservation. Well depths averaged 338 feet with the deepest well reaching a maximum of 1,300 ft below land surface. Perforation intervals are available for 1,512 wells in the basin.  About one third of the wells penetrate only bedrock and about fifteen percent of the wells are completed entirely in alluvial materials.  Bedrock was described variously as bedrock, granite, metamorphic, rock, and schist. Alluvium is comprised of decomposed granite, silt, sand, clay, and gravels.

These well data and other geophysical information, particularly gravity data, were used to construct a three-dimensional hydrogeologic framework model.  This model is being updated and revised with the lithology information available from additional wells and geophysics.

Previous U.S. Geological Survey studies of the basins defined the thicknesses and characteristics of the alluvial sediments that comprise the main part of the aquifer system and identified where wells completed in the underlying fractured bedrock were located. However, although the fractured bedrock is an important part of the aquifer system for domestic and some irrigation-water supply, the thickness and water-bearing characteristics of the bedrock are not well understood (Landon and others, 2015; Moyle, 1976). Existing gravity data identified a possible conduit for groundwater flow beneath Cahuilla Creek, an incised stream and the main source of surface water to the basin. Electrical resistivity tomography data were collected at two transects in August 2018 to estimate depth to water, evaluate the cross-sectional depth to bedrock underlying this narrow valley, estimate the change in alluvium thickness between transects, and to help select potential locations for new groundwater monitoring wells.

The study area covers approximately 83,000 acres of land in rural Riverside County and San Diego County.  It contains parts of Anza-Borrego Desert State Park, Beauty Mountain Wilderness, and Mount San Jacinto State Park; the Cahuilla Reservation makes up 21 percent of the land in the study area.  In order to assess land use change in the Anza study area, spatial data from digital maps of land use from 1934 to 2005 were compared (fig. 1). The data were sourced from a scientific publication (Swift and Sabourin, 2000) and a public entity (Southern California Associated Governments, 2006).  The amount of watershed lands, or natural open space, has decreased steadily from about 91 percent in 1934 to about 85 percent in 2005 as more land has been converted to agricultural or other uses (table 1). Between 1934 and 2005, approximately 5,000 acres of watershed lands have been converted to other uses.  In 2005, residential building represented almost 8 percent of the land use in the study area. Residential development increased by 2,000 acres between 1990 and 2005.

The Basin Characterization Model (BCM) simulates the interactions of climate (rainfall and temperature) with empirically measured landscape attributes including topography, soils, and underlying geology. It is a grid-based model that calculates the water balance (the amount of water in each of the fractions of the total water budget, including runoff, recharge, and evapo-transpiration) for each cell in a given watershed in set time steps for the entire area.

For more information on the use of the BCM in water balance modeling for the Anza region, please see Preliminary Estimates of Infiltration in the Anza Region.

Evapotraspiration (ET) is the sum of water evaporated from the soil and transpired from plants and is an important component of the hydrologic cycle.  ET is equivalent to the consumptive use of a plant, and can be evaluated using surface energy balance models based on remotely sensed data.   Total ET (irrigation + rain fed) presented in this study is based on MODIS (1 km pixel size) derived data for calendar years 2010 and 2015 and is reported as a depth of water in mm/yr for each pixel.  These data products were supplied by the USGS EROS data center using methods developed by Senay and others (2013).

For additional information on the use of evaportranspiration (ET) and water use mapping, please visit:  https://www.usgs.gov/centers/eros/science/evapotranspiration-and-water-use-mapping 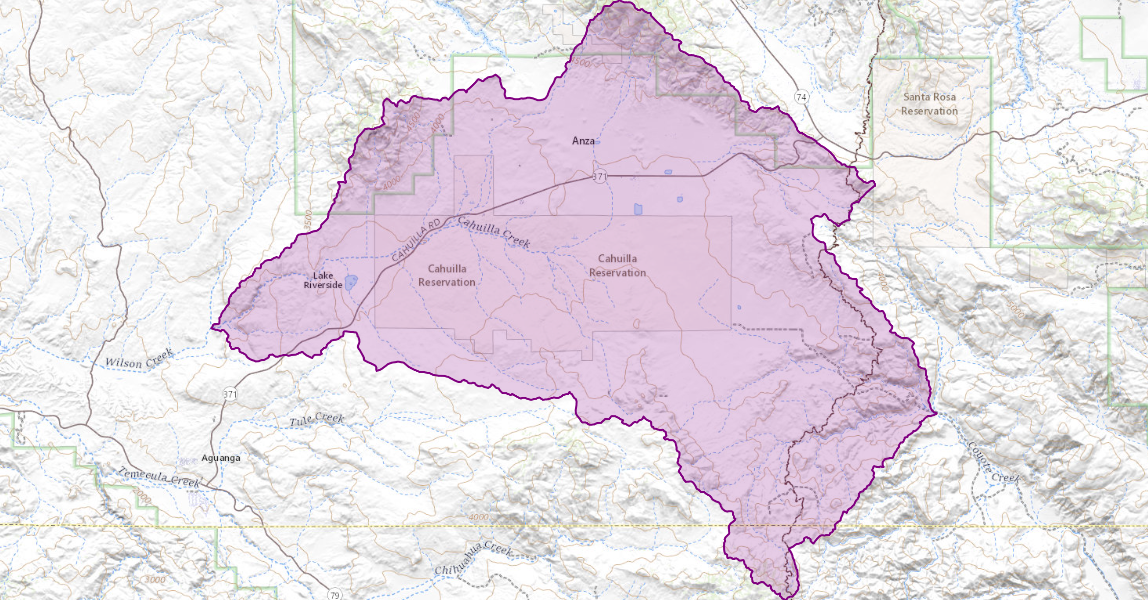 The Cahuilla Valley and Terwilliger Valley groundwater basins, 9-006 and 7-026 respectively (California Department of Water Resources 2016) located approximately 25 miles southwest of Palm Springs, are the sole-source for groundwater supply for the rural disadvantaged community and two Native American Tribes, the Ramona Band of Cahuilla and the Cahuilla,. The characteristics and sustainable yield
By
California Water Science Center 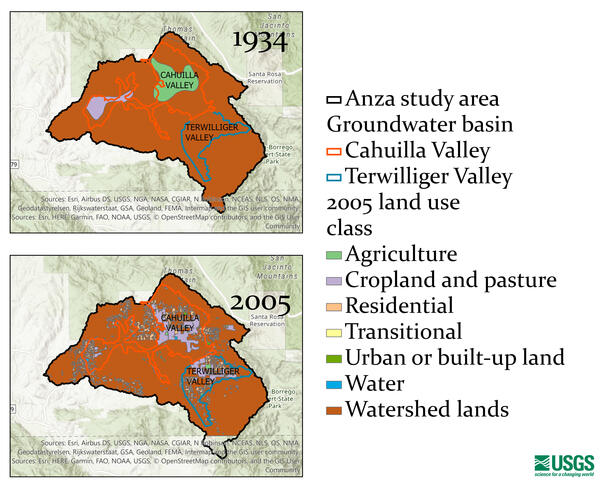 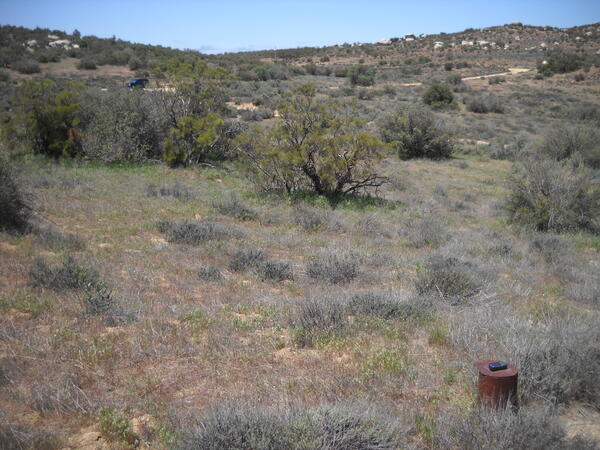 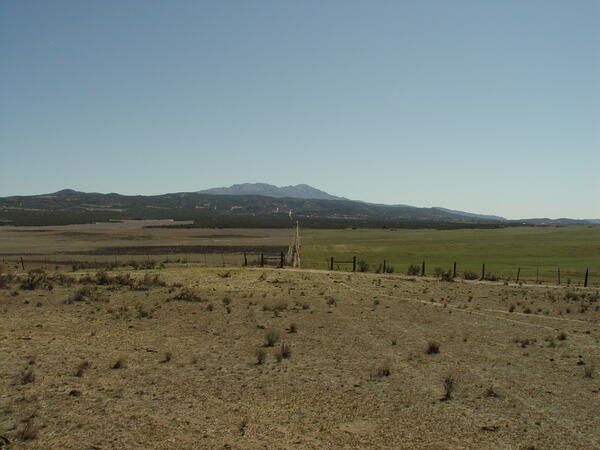 A basin-scale approach to estimating recharge in the desert: Anza-Cahuilla groundwater basin, CA

The Anza-Cahuilla groundwater basin located mainly in the semi-arid headwaters of the Santa Margarita River watershed in southern California is the principle source of groundwater for a rural disadvantaged community and two Native American Tribes, the Ramona Band of Cahuilla and the Cahuilla. Groundwater in the study area is derived entirely from precipitation and managing groundwater sustainably
By
Water Resources, California Water Science Center
November 24, 2015

The population of the Anza–Terwilliger area relies solely on groundwater pumped from the alluvial deposits and surrounding bedrock formations for water supply. The size, characteristics, and current conditions of the aquifer system in the Anza–Terwilliger area are poorly understood, however. In response to these concerns, the U.S. Geological Survey, in cooperation with the High Country Conservancy
By
Water Resources, California Water Science Center
June 1, 2013

The increasing availability of multi-scale remotely sensed data and global weather datasets is allowing the estimation of evapotranspiration (ET) at multiple scales. We present a simple but robust method that uses remotely sensed thermal data and model-assimilated weather fields to produce ET for the contiguous United States (CONUS) at monthly and seasonal time scales. The method is based on the S
By
Earth Resources Observation and Science Center, Water Availability and Use Science Program, Earth Resources Observation and Science (EROS) Center
May 1, 2007

This digital geospatial dataset documents the fault traces in the Anza and Terwilliger area of southwest Riverside County, California, that were modified from Moyle (1971) by Woolfenden and Bright (1988, figure 8). The fault information is used to help assess ground-water level changes in the area of Anza and Terwilliger between 2004 and 2005.
January 1, 2007

This digital data set contains the locations, water-level altitude, and water-level differences of 70 wells selected to document water-level changes between fall 2004 and spring 2005 in the Anza-Terwilliger area of Riverside County, California. The winter of 2005 was one of the wettest periods on record. Links to the U.S. Geological Survey National Water Information Systems Website (NWISWeb) hav
January 1, 1994

Ground-water conditions in the Anza-Terwilliger area, with emphasis on the Cahuilla Indian Reservation, Riverside County, California, 1973-86

Demand for groundwater in the 96-sq mi Anza Terwilliger area of California has increased in recent years because of population growth and agricultural development. In order to evaluate the potential effects of continued growth and development on the water resources of Cahuilla Indian Reservation, water level, land use, and water quality data were collected and analyzed. Water level measurements in

Compares Anza Valley, CA land use data within the USGS study boundaries for 5 time periods between 1934 and 2005.

Compares Anza Valley, CA land use data within the USGS study boundaries for 5 time periods between 1934 and 2005.