The Government of India, with the support of the U.S. Geological Survey (USGS), has released the initial results of the most comprehensive gas hydrate scientific drilling investigation ever undertaken.  Coinciding with the release of the Journal of Marine and Petroleum Geology Special Issue on Marine Gas Hydrate Reservoir Systems Along the Eastern Continental Margin of India: Results of the National Gas Hydrate Program Expedition 02, the leadership of the Indian National Gas Hydrate Program Expedition 02 (NGHP-02) reported on the discovery of several world class gas hydrate accumulations that are suitable for gas hydrate production testing.

Journal of Marine and Petroleum Geology - Special Issue:
Geologic Implications of Gas Hydrates in the Offshore of India: Results of the National Gas Hydrate Program Expedition 02

What are gas hydrates?

The National Gas Hydrate Program (NGHP) in India was initiated by the Ministry of Petroleum and Natural Gas (MoP&NG) in 1997 and in the year 2000, the NGHP was reconstituted by the MoP&NG under the overall coordination of the Directorate General of Hydrocarbons (DGH).  The USGS participation in the NGHP effort is enabled through a Memorandum of Understanding with the DGH. The NGHP-02 was planned and managed by the Oil and Natural Gas Corporation Limited of India on behalf of the NGHP and the MoP&NG and the expedition was conducted from 3-March-2015 to 28-July-2015 off the eastern coast of India.  The drilling platform was the research D/S Chikyu, operated by the Japanese Drilling Company and the shipboard science program was managed by the Japan Agency for Marine-Earth Science and Technology (JAMSTEC).  Logging while drilling (LWD), wireline logging, and formation testing services were provided by Schlumberger.  Pressure coring tools were provided by JAMSTEC and shipboard pressure core operations and analysis were provided by Geotek Coring. The first two months of the expedition were dedicated to LWD operations with a total of 25 holes being drilled and logged. The next three months were dedicated to coring operations at ten of the most promising sites.

The NGHP-02 shipboard operations and science program was coordinated by Dr. Timothy Collett of the USGS.  USGS scientists also contributed to every phase of NGHP-02 with Dr. William Waite assisting with all aspects of the conventional- and pressure-coring program laboratory studies and Dr. John Pohlman supporting the ship-board geochemistry program.  In addition, the USGS also contributed to the post-drilling shore-based analysis phase of the expedition by analyzing geochemical and physical property data and samples collected during the expedition. Additional operational and scientific support was provided by the USGS, the U.S. Department of Energy, the National Institute of Advanced Industrial Science and Technology (AIST), and the Japan Oil, Gas and Metals National Corporation.  Dr. Waite and Dr. Junbong Jang, also with the USGS, worked closely with scientists from AIST on the analysis of 25 pressure core samples collected during NGHP-02 from sand reservoirs with high gas hydrate concentrations.

The formation of highly concentrated gas hydrate accumulations, which are more suitable for energy extraction, requires the presence of relatively coarse-grained sediments with porosity sufficient to support the migration and accumulation of gas, and the nucleation of gas hydrate.  The results of downhole logging, coring, and formation pressure testing operations during NGHP-02 have confirmed the presence of extensive sand-rich depositional systems throughout the deepwater portions of the Krishna-Godavari and Mahanadi Basins.  Two areas of the Krishna-Godavari Basin, referred to as Areas B and C, contain substantial gas hydrate accumulations in sand-rich systems and therefore represent ideal candidate sites for future gas hydrate production testing.

In the Krishna-Godavari Basin, extensive reservoir systems were confirmed with sediment grain-sizes ranging from coarse-silts to gravels.  These reservoirs range from fully- to partially-filled with gas hydrate.  The gas is determined to be from only microbial sources, and in part migrated into the reservoirs from deeper systems.  The controls on gas hydrate occurrence are complex and varied; and include substantial reservoir heterogeneity and sufficient permeability throughout the reservoirs and seals that allowed for pervasive fluid flow into and through the hydrate-bearing systems.  These discoveries are the most significant confirmation of the exploration approach that focuses on direct detection of hydrate reservoirs supported by comprehensive petroleum systems analyses.

The work conducted on the NGHP-02 cores provided confirmation of insights from prior work, including the strong correlations between the nature of the sediment (grain size, sorting, mineralogy), gas hydrate saturation, and sediment strength properties.  The effort further confirms recent findings regarding the variability in gas hydrate reservoir quality, most notably the occurrence of permeabilities measured in the tens of milli-Darcys within highly-saturated samples.  The studies also indicated fundamentally new insights, perhaps most notably being the recognition of potential impacts of post-depressurization reservoir consolidation on reservoir effective permeabilities.

To assess the potential response of discovered gas hydrate deposits to depressurization, comprehensive geologic models were constructed to enable numerical simulation of expected results for two sites.  Both sites (Area C: NGHP-02-09 and Area B: NGHP-02-16) feature thick sequences of thinly-interbedded reservoir and non-reservoir facies at sub-seafloor depths less than 300m and sub-sea depths of 2400m or more. These settings pose significant challenges to current modeling capabilities.  First, the thinly-interbedded reservoir architecture complicates the determination of basic reservoir parameters from both log and core data due to measurement resolution issues.  Secondly, the fine-scale variation in sediment properties imparts great contrasts in key parameters over very short distances, creating high gradients at multiple scales and varying orientations that necessitate careful design of high-definition simulation grids.  Thirdly, the deposits include internal sources of water, as well as a range of complex boundary conditions, including variable permeability within the overlying mud-rich “seals,” that complicate reservoir depressurization.  Together, these concerns confirm the viability of the modeled accumulations for scientific testing and identify key challenges related to the selection of specific test sites and the design of test wells.

Physical property characteristics of gas hydrate-bearing reservoir and associated seal sediments collected during NGHP-02 in the Krishna-Godavari Basin, in the offshore of India

Constraints on the ﬂuid supply rate into and through gas hydrate reservoir systems as inferred from pore-water chloride and in situ temperature proﬁles, Krishna-Godavari Basin, India

Origin of low-chloride fluid in sediments from the eastern continental margin of India, results from the National Gas Hydrate Program Expedition 02

Gas hydrate saturation and morphology from analysis of pressure cores acquired in the Bay of Bengal during expedition NGHP-02, offshore India

PCATS triaxial testing: Geomechanical properties of sediments from pressure cores recovered from the Bay of Bengal during expedition NGHP-02 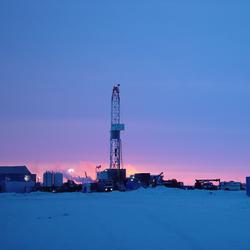 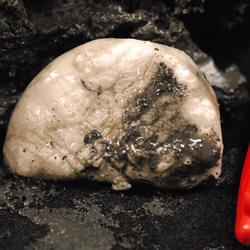 In 2008 an international partnership led by the Directorate General of Hydrocarbons (DGH) under the Ministry of Petroleum and Natural Gas (Government of India) and the U.S. Geological Survey (USGS) released the results of the most complex and comprehensive gas hydrate field venture yet conducted. Upon the occasion of the Indian National Gas Hydrate Program Gas Hydrate Conference held February 6-8...
By
Energy and Minerals, Energy Resources Program, Central Energy Resources Science Center
link
February 28, 2008

In 2008 an international partnership led by the Directorate General of Hydrocarbons (DGH) under the Ministry of Petroleum and Natural Gas (Government of India) and the U.S. Geological Survey (USGS) released the results of the most complex and comprehensive gas hydrate field venture yet conducted. Upon the occasion of the Indian National Gas Hydrate Program Gas Hydrate Conference held February 6-8...
Learn More

Gas hydrate is a naturally occurring “ice-like” combination of natural gas and water that has the potential to serve as an immense resource of natural gas from the world’s oceans and polar regions. However, gas-hydrate recovery is both a scientific and a technical challenge and much remains to be learned about the geologic, engineering, and economic factors controlling the ultimate energy resource
By
Energy Resources Program, Central Energy Resources Science Center
December 1, 2014

Gas hydrate resource assessments that indicate enormous global volumes of gas present within hydrate accumulations have been one of the primary driving forces behind the growing interest in gas hydrates. Gas hydrate volumetric estimates in recent years have focused on documenting the geologic parameters in the “gas hydrate petroleum system” that control the occurrence of gas hydrates in nature. Th
By
Energy Resources Program, Central Energy Resources Science Center 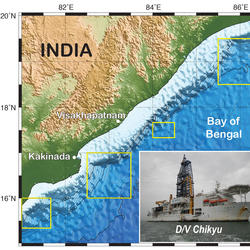 The USGS and its research partners in India and Japan have reported on one of the most extensive data sets ever collected on the occurrence of natural gas hydrate.