The USGS has a long-term research effort that identified endocrine disruption in smallmouth bass (SMB) in the Chesapeake Bay watershed.  Endocrine disruption can cause many changes in fish, including intersex characteristics where fish develop characteristics of the other sex, such as immature eggs forming in males. An overview by USGS of endocrine disruption in fish found the condition downstream of wastewater treatment plants and in watersheds dominated by agricultural land use; however, no single cause or environmental stressor has been directly identified (Blazer and others, 2021).  To better understand the risk factors associated with SMB endocrine disruption, the USGS conducted monitoring and analysis at a site in the Potomac River Basin to assess effects of agricultural land use.  The results from these research efforts are informing several outcomes of the Chesapeake Watershed Agreement, including a better understanding of the occurrence and effects of contaminants, improving water quality, and restoring fish habitat.

The collaborative monitoring program, conducted by the USGS and Maryland Department of Natural Resources (MD DNR) was conducted at a site located near the confluence of Antietam Creek and the Potomac River in Dargan, Maryland (figure 1).

The aim of this study was to learn how exposure to individual and complex contaminant mixtures changes seasonally and annually, particularly during key SMB developmental lifestages, and to identify how biological indicators at the molecular, cellular, tissue, individual, and SMB population levels respond to these exposures.  In particular, the SMB population at Dargan, Maryland has significantly declined over the past decade and more than half of the land use in this area is either agriculture or development.

A unique aspect of the study was to collect both surface-water samples and fish, during multiple seasons over a 7-year period to assess the changes in the life cycle of SMB. Monthly or biweekly analyses of over 300 surface water chemicals with adult SMB fish health assessments in spring (pre-spawn) and fall (recrudescence, when SMB start to prepare for spring spawning) were conducted from 2013–2019.  Approximately 20 SMB were collected by MD DNR at each time period and analyzed by the USGS.

The USGS assessment focused on changes in liver and testis gene transcripts associated with reproduction (molecular), changes in microscopic indicators of multiple tissues (cellular), and organismal health indicators such as oganosomatic indices and condition factor (measures of fitness), and visible abnormalities. The study applied a unique set of biological effects indicators to assess endocrine disruption including:

The integration of chemical monitoring with biological effects provided a deeper understanding of risk factors for observed adverse effects in SMB. Some of the major findings included:

Of the 300 contaminants analyzed in surface water, there was a wide range of occurrence but many of the compounds were not detected.

Several of the reproductive indicators varied over time:

The changes in the biological indicators were related to several factors: 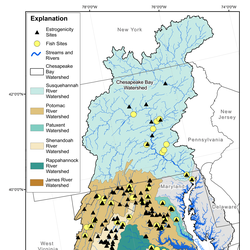 Issue: Effects of exposure to estrogenic-chemical contaminants have been observed in many fish species worldwide. One effect is described as “intersex” because fish will take on characteristics of the other sex, such as immature eggs forming in male fish. Studies in the Chesapeake Bay watershed have also identified the exposure of fish to endocrine-disrupting compounds. The estrogenic-endocrine...
By
Core Science Systems, Chesapeake Bay Activities
link
January 22, 2021

Issue: Effects of exposure to estrogenic-chemical contaminants have been observed in many fish species worldwide. One effect is described as “intersex” because fish will take on characteristics of the other sex, such as immature eggs forming in male fish. Studies in the Chesapeake Bay watershed have also identified the exposure of fish to endocrine-disrupting compounds. The estrogenic-endocrine...
Learn More
November 25, 2022

Decades of poor reproductive success and young-of-the-year recruitment, in addition to adult mortality, has led to a decline in the smallmouth bass (SMB) population in subwatersheds of the Potomac River. Previous studies have identified numerous biologic and environmental stressors associated with negative effects on SMB health. To better understand the impact of these stressors, the current study
By
Chesapeake Bay Activities, Eastern Ecological Science Center