Several reports of flooding are available for the years 1911–13; however, most of the news accounts are for high water along the Belle Fourche and Cheyenne Rivers.  Both 1915 and 1920 were exceptional in terms of prolonged wet conditions with widespread flooding.  The southern part of the Black Hills was especially wet during May and June 1915, with numerous reports of flooding that ranged from localized flooding to widespread flooding and included many accounts of the worst flooding in many years for many locations.  A June 17, 1915, article in the Oelrichs Advocate provided a noteworthy account for Horsehead Creek of the worst known flooding to date, which surpassed the previous known flood of record that had occurred 23 years previously.  A June 19, 1915, article in the Buffalo Gap Gazette reported that the same storm had caused flooding that also surpassed a previous high-water mark for Beaver Creek near Buffalo Gap before tracking towards Horsehead Creek.  Numerous news articles provided continuing accounts of heavy storms through August 1915, with most reports for the southern Black Hills.

The year 1920 may very well constitute the most extensive and widespread flood conditions that have occurred since European settlement in western South Dakota and the Black Hills area.  Flooding conditions occurred in early spring of 1920 for both the Belle Fourche and Cheyenne Rivers and for several tributaries in the Black Hills area.  Miller (1986) noted that a 24-hour rainfall total of 7.1 inches for Custer on April 7, 1920, shared a regional record with Ft. Meade for June 13, 1907.  Substantial flooding occurred along Rapid Creek on May 10–12.  A peak flow of 114,000 cubic feet per second (ft3/s) was recorded on May 12, 1920, at station 06400500 (Cheyenne River near Hot Springs), which is the largest peak flow ever recorded anywhere along the Cheyenne River.  A record stage of 18.9 feet also is documented for the next day (May 13) at station 06439500, which is located on the Cheyenne River about 75 miles downstream from the confluence of the Belle Fourche River.  The stage for this station was determined from information provided by local residents and probably represents the largest documented flood for the station; however, the magnitude of the peak flow is not known.  The worst known flooding in the history of Hat Creek in the southern Black Hills claimed seven lives on May 12, 1920.  The northern Black Hills also had substantial flooding in 1920, as evidenced by a May 15 article in the Rapid City Journal reporting that “Newell suffered the heaviest rainfall ever known” and that flooding had occurred for the third time of the season in Belle Fourche.  A June 4, 1920, article in the White Owl Oracle reported that Boxelder Creek "was fully four feet higher than ever known before" and "was over three miles wide."  A sense of the widespread nature of the 1920 flooding was provided by a May 29, 1920, article in the Oelrichs Advocate that reported severe railroad damage along the Bad and White Rivers. 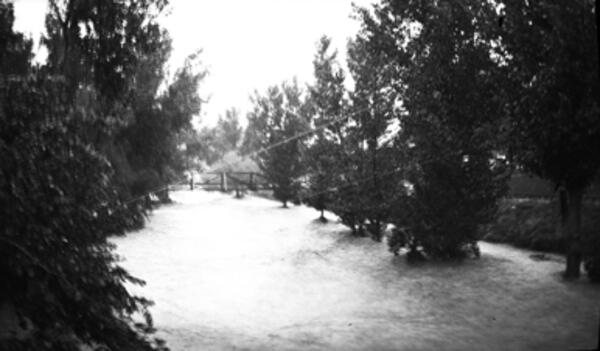