On August 17, 2007, substantial flooding occurred primarily in the Hermosa area, and flooding in the Piedmont area generally was of a localized nature. The maximum observed precipitation totals for this 2007 storm were 10.50, 10.44, and 10.00 inches, which were measured in three rain gages located just north of Battle Creek between Hayward and Hermosa (Holm and Smith, 2008).  These totals occurred within a period of about 3 hours (Holm and Smith, 2008); however, various observers reported that most of the precipitation occurred within about 2 hours. The most severe flooding during 2007 occurred in the Hermosa area, where low-lying areas in the southern and southeastern parts of this community were inundated by flooding along Battle Creek.  A railroad grade breached just south of town, and several houses in a small sub-development just downstream from the breach were washed from their foundations. Substantial scouring occurred for two bridge foundations about 2–3 miles west of Hermosa along Highway 40, and substantial damage to the highway grade occurred in several locations.  Numerous area roads incurred damage related to plugging, overtopping, or washing out of culverts, bridges, or stream crossings. A peak flow of 18,600 ft3/s occurred on this date along Battle Creek near Hermosa (station 06406000), which was second only to the 1972 peak flow of 21,400 ft3/s.

Widespread wet conditions occurred again in 2009 in many parts of the northern Black Hills from melting of heavy snowpack and subsequent rains; however, annual peak flows for most gaging stations were not exceptional.  A peak flow of 29,500 ft3/s was recorded on April 13 for the Belle Fourche River near Elm Springs (station 06438000). 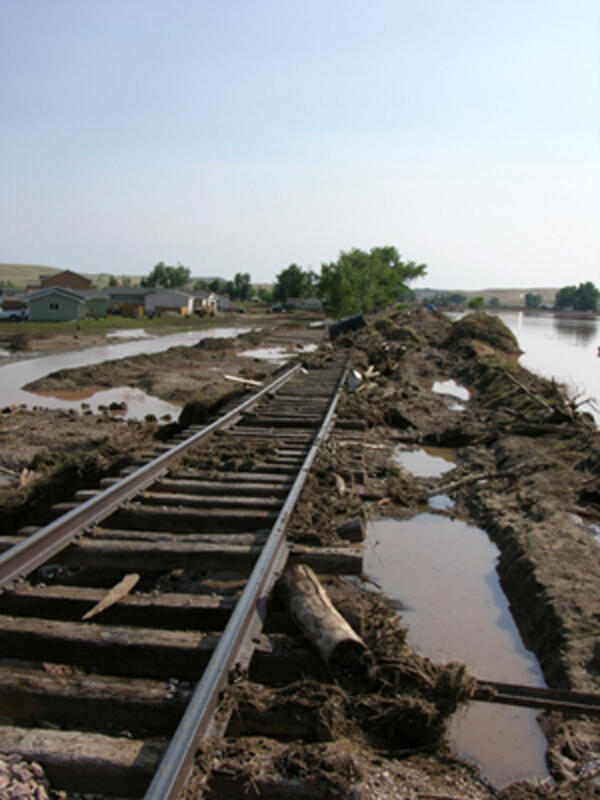