The Surface Elevation Table (SET) is a portable mechanical leveling device for measuring the relative elevation change of wetland sediments. This website presents information on the purpose, design, and use of the SET. The website is specifically designed to be a forum for researchers in wetland science who use or might use the device and to offer more information about the proper use of the SET and interpretation of its data. But we encourage anyone who wants to learn more about research techniques and their development to visit the site as well.

The SET is currently used in a variety of wetland and shallow water environments throughout the world.. SET's are currently used in the United States (22 states and the District of Columbia) and 22 countries worldwide. 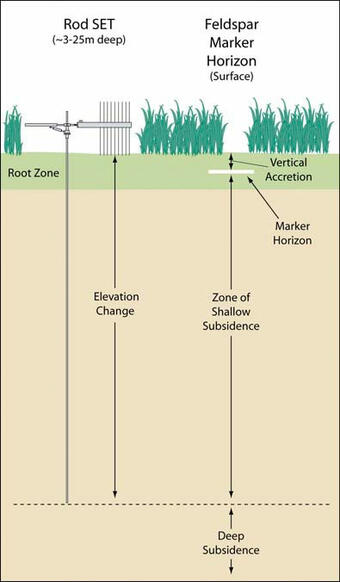 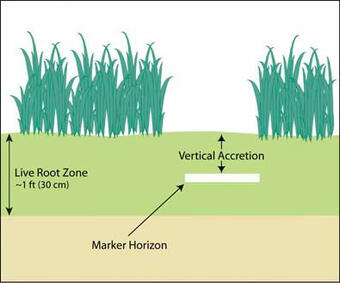 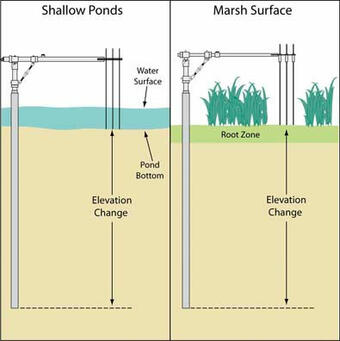 Precise measures of sediment elevation in wetlands are necessary to determine rates of elevation change, particularly relative to sea level rise, and to gain an understanding of the processes responsible for elevation change. The SET provides a nondestructive method for making highly accurate and precise measurements of sediment elevation of intertidal and subtidal wetlands over long periods of time relative to a fixed subsurface datum. This technique overcomes many of the limitations of methods currently used to estimate elevation such as sedimentation pins, and precision surveying.

There are 2 types of SET. The original SET designed by Boumans and Day and Cahoon et al., and the Rod SET (RSET) designed by Cahoon et al. The Rod SET can be attached to either deep or shallow benchmarks. This flexible design allows it to be used to to monitor elevations across different depths of the soil profile. The Rod SET is the recommended instrument to use in new SET installations.

The design of the original SET developed by Boumans and Day (1993) is derived from the Sedi-Eros Table created by Schoot and de Jong (1982). The SET can be used to determine both the influence of a single meteorological event on sediment surface elevation and a long-term trend (i.e., decades) in elevation change.

When attached to a bench mark pipe or rod, the SET provides a constant reference plane in space from which the distance to the sediment surface can be measured by means of pins lowered to the sediment surface. Repeated measurements of elevation can be made with high precision because the orientation of the table in space remains fixed for each sampling.

Elevation change measured by the SET is influenced by both surface and subsurface processes occurring within the soil profile.

Numerous materials such as sand, feldspar, brick dust and glitter, can be used as marker horizons. We normally use white feldspar clay which is easily distinguishable from surrounding sediments.

When used simultaneously, the SET and Marker Horizon techniques can provide information on below ground processes that influence elevation change. Differences between the rates of Vertical Accretion and Elevation Change can be attributed to processes occurring below the feldspar layer and above the bottom of the SET pipe. This area is called the Zone of Shallow Subsidence. 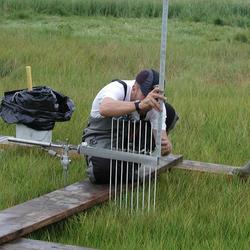 The Challenge: The high winds and storm surge associated with Hurricane Sandy impacted coastal wetlands from Virginia to Maine. Understanding the ecological and geological impacts of hurricanes on coastal wetlands and their interactive effects with local conditions is important for identifying resilience of these communities to predicted global sea-level rise. Given the projected increase in...
By
Ecosystems, Eastern Ecological Science Center
link
August 1, 2016

The Challenge: The high winds and storm surge associated with Hurricane Sandy impacted coastal wetlands from Virginia to Maine. Understanding the ecological and geological impacts of hurricanes on coastal wetlands and their interactive effects with local conditions is important for identifying resilience of these communities to predicted global sea-level rise. Given the projected increase in...
Learn More

The National Park Service, in response to the growing evidence and awareness of the effects of climate change on federal lands, determined that monitoring wetland elevation change is a top priority in North Atlantic Coastal parks (Stevens et al, 2010). As a result, the NPS Northeast Coastal and Barrier Network (NCBN) in collaboration with colleagues from the U.S. Geological Survey (USGS) and The N
By
Ecosystems, Eastern Ecological Science Center, Patuxent Wildlife Research Center