Chicago faced a tragic awakening to the dangers of extreme heat in July 1995, when more than 700 people died during a record-breaking heat wave that stretched for five days.

Since then, the City has updated its emergency response strategy to try to prevent heat-related illness and death, including outreach to the most vulnerable populations. Impervious surfaces such as pavement and rooftops can exacerbate heat waves, so green roofs have sprouted by the hundreds, and the Chicago Park District promotes 8,800 acres of green space. At the site of an old railyard near Lake Michigan, Chicago created the 24.5-acre Millennium Park, one of the largest green roofs in the world.

The average annual temperature for Chicago is rising, according to National Oceanic and Atmospheric Administration statistics. The average during the years of 1981-2010 was 49.9 degrees; for 1991-2020, it reached 51.3 degrees. Climate change is also expected to affect the frequency and intensity of heat waves.

The effectiveness of urban heat island mitigation measures, however, is a critical data point for future planning and policies. Take green spaces in Chicago, for example. Are they helping to cool temperatures? That was one question a public-private collaboration sought to answer in a project using Landsat data that could help other cities as well.

In fall 2019, several groups came together for a pilot project to evaluate urban heat interventions. The City of Chicago served as the pilot city. City Tech Collaborative managed the partnership and project, which also included Microsoft, with Azure cloud computing and other tools; Esri, with ArcGIS mapping and other software; and d3i Systems, with Earth observation research and expertise, including the use of Landsat data.

“If cities are investing in green roofs or parks or permeable surfaces, it’s a good idea for the planners and taxpayers to know if those things actually have the intended effect,” Ponce said. “And it allows us to get into a whole new era of performance-based infrastructure development and design.”

Dr. Christian Braneon, a remote sensing specialist at NASA’s Goddard Institute for Space Studies, was happy to work with d3i Systems to provide guidance on selecting and analyzing satellite data.

“What I get the most meaning from is the idea that I could help cities save people’s lives, prevent people from being hospitalized, prevent people from dying, and have a better quality of life,” Braneon said. “… So I was really excited about the possibility of developing a tool that would help protect people.”

The group explored several types of satellite data, but at 30 meters, Landsat had a finer resolution for capturing the urban heat interventions.

Using Landsat’s historical archive, the project looked at trends of heat severity over time across Chicago and the statistical significance of land surface temperature changes at 26 intervention sites, which were mostly parks along with some neighborhoods.

“We did a lot of land acquisition over several years to convert some of the industrial space on the far south side of Chicago into open space,” said Brad Roback, who works in the Chicago Department of Planning and Development, focused on sustainability. Also involved in the project were Chicago’s Department of Public Health and the Office of Emergency Management Control. “We’re always working with the park district and with nonprofit partners to develop not only park space but community-managed open spaces like community gardens, pocket parks, those sorts of things.”

Using Landsat scenes between 2000 and 2019, the researchers found that some larger-scale hot spots had decreased considerably in severity, such as the south side and the eastern edge along Lake Michigan, and others less so, like the center and the north edge. Conversely, western Chicago had persistent hot spots, and some had intensified.

Five of the intervention sites, including Millennium Park, had statistically significant decreases in surface temperature, while one had a gain in temperature. The rest did not show significant changes.

“We thought we could use this data to do some planning, like looking for places where we might want to target green infrastructure or other types of treatments that would help with the elevated surface temperatures,” Roback said.

“The Landsat data was the asset around which we built the project and could serve as the basis for a replicable, scalable tool” to serve other cities, Ponce said.

“The analysis enabled by Landsat heat data provides a foundation for planning and problem solving,” Ponce said. “Without the data, we’re just guessing about what interventions work best to mitigate hot spots. Although this type of analysis often raises additional questions, including interactions among multiple variables, unraveling the complexity of urban heat will ultimately help us build better cities and improve residents’ quality of life.”

One question that arose during this project led to research Braneon co-authored about using Landsat data to evaluate the heat mitigation effects of green roofs. It compared the land surface temperatures and vegetation levels before and after the installations of three green roofs in Chicago—Millennium Park, City Hall, and a recently built Walmart—with similar nearby structures without green roofs.

As expected, surface temperatures at Millennium Park, which covers a parking garage and commuter rail station, dropped compared to its control site. Before it became a park, the site was consistently warmer than the control site, and temperatures at both had been rising.

The other two sites illustrate the complexities of trying to mitigate the effects of urban heat.

As it turned out, Walmart had replaced an open area with overgrown vegetation. “It really did not have the benefit that you might think because you actually replaced open green space with a parking lot and lots of impervious area,” Braneon said.

Roback finds that kind of information valuable to consider. “Even though you do incorporate green infrastructure-like things—like a green roof, more landscaping in a parking lot—the net could be a temperature increase. So it makes us think, OK, what more could we do to mitigate that, like maybe specific types of pavement should be used instead of asphalt surface. Permeable pavers might be better at mitigating.”

Many factors can influence the effectiveness of a green roof, Braneon said, such as the variety of vegetation, the height of the roof, and the size of the green space.

“It really matters when you do urban design interventions, when you create green space, when you implement parks, how big is the site? Because you start to have more of an effect when the spatial area is greater, and you have more effect when you have multiple green infrastructure interventions related to cooling in the same area,” Braneon said.

He hopes this green roof study, like the original collaborative project, sparks further questions about urban heat interventions and further searches for answers, such as in other geographical locations and climates.

“It’s something you can only do with a satellite mission like Landsat that allows for these longitudinal studies, where you can look at a period of 20 years, for example,” Braneon said. 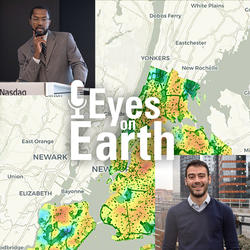 Urban heat islands occur in areas containing more impervious surfaces and fewer natural environments. The day and night surface temperature is higher in urban heat islands than in surrounding areas. During heat waves, this can lead to greater numbers of heat-related illnesses and deaths.