Sage-grouse are dependent on vast expanses of undisturbed and unfragmented (no roads or human developments) sagebrush (Artemisia spp.) habitat.

Sagebrush ecosystems are diverse habitats found throughout western North America that support a variety of flora and fauna. Home to unique wildlife such as Sage-grouse, Sage Thrashers, Brewer's Sparrows, Ferruginous Hawks, and pygmy rabbits, these ecosystems have undergone intense changes since the time when millions of bison roamed the plains. European settlement and intense agricultural practices resulted in the loss of over half of the sagebrush ecosystem. Today, sagebrush habitats continue to be threatened by a variety of influences. Conversion of these native landscapes to agriculture, invasion by non-native plant species, energy extraction activities and associated developments, rural expansion, and intense grazing pressures can all reduce, degrade, or fragment remaining habitats.

To conserve these valuable ecosystems, land and resource managers need a solid understanding of the functioning of these systems and the influence that human developments may have on sagebrush-dependent species. Research addressing these issues will provide managers with tools and information to balance future human uses with conservation of sagebrush habitat and obligate species, and greatly assist managers in providing high-quality habitat for wildlife.

A range-wide presettlement and current distribution map for Greater Sage-grouse, called SAGEMAP, has recently been completed, along with a detailed conservation assessment of Greater Sage-grouse and sagebrush ecosystems. This effort, initiated by the Western Association of Fish and Wildlife Agencies and developed by the USGS, state and federal agencies, and various university partners, resulted in the compilation of information on over 5,500 known breeding (lek) sites throughout the species' North American range. Using these data, researchers are developing statistical models contrasting currently occupied (extant) and previously occupied (extinct) habitat to identify habitat variables (e.g., sagebrush distribution, habitat patchiness) and human-related parameters (e.g., human population density, agriculture, road densities, energy development) that best predict known local extinctions. This range-wide approach will identify populations that are considered secure as well as those most likely at risk of future extirpation. Detailed theoretical and empirical models that describe such changes are necessary to understand the underlying processes determining population persistence.Sage-grouse are a sagebrush-obligate species that is particularly sensitive to changes in the sagebrush ecosystem, and researchers are focusing on this species as a potential indicator for other wildlife within sagebrush systems. Greater Sage-grouse, the more abundant of the two Sage-grouse species, exist in only half of their historic range throughout the West, and all populations have declined since the early 1970s, some by as much as 90 percent. The species is considered endangered in Canada and was recently petitioned, but rejected, for listing as threatened or endangered in the U.S. Nonetheless, long-term declines have prompted vast conservation efforts to reverse the plight of the Sage-grouse in both countries.

Collectively, these approaches will provide information about both the pattern and process of Sage-grouse persistence, allowing researchers to identify underlying mechanisms linked to population persistence and those driving more local population declines. Little knowledge is currently available about the effects of intensified anthropogenic activities (such as road and energy developments) on Sage-grouse population viability. These models will provide managers with the foundation for a science-based framework for landscape-scale management of Greater Sage-grouse populations, a flagship species for sagebrush ecosystems. 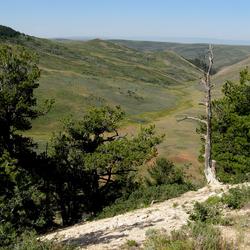 The WLCI is a long-term science based effort to enhance aquatic and terrestrial habitats at a landscape scale in Southwest Wyoming, while facilitating responsible development.
By
Northern Rocky Mountain Science Center
link
April 1, 2016

The WLCI is a long-term science based effort to enhance aquatic and terrestrial habitats at a landscape scale in Southwest Wyoming, while facilitating responsible development.
Learn More