With this Call for Proposals, the National Land Imaging and Innovation Centers are funding work that will fill observational gaps with new or modified UAS-deployed sensors.

Below are the proposals awarded 1- year funding opportunities, of up to $100K!

The volume and timing of snowmelt in mountainous basins are needed to inform those responsible for forecasting, allocating, and monitoring water supplies. Accurate forecasts require an understanding of the spatial and temporal distribution of snow depth and snow water equivalent (SWE). These variables are traditionally monitored at sparsely distributed ground-based stations (SNOTEL) and modeled in areas where data are not available.

Successful completion of the workflow will create a rapid deployment platform for generating snow depth and SWE grids at prescribed and repeatable transects. UASnow will offer a platform for quantifying the spatial and temporal variations in the snow-water volume and snow density that will enhance runoff forecasting related to water-resources planning, flood warnings and mitigation strategies.

Measuring emissions of important greenhouse gases, such as methane (CH4), carbon dioxide (CO2), and nitrogen oxides (NOx), from natural ecosystems requires sensors that are fast, highly accurate, and able to measure the low levels at which these gases are present. While such sensors already exist in larger form factors, small-scale sensor packages, suitable for use on small unmanned aerial systems (sUAS), are still being developed. In addition to size, however, there are other issues that must be taken into consideration when flying gas sensors on sUAS.

Since emissions from natural systems are so low, factors that can minimize the effects of ground and prop wash, such as sensor placement on the sUAS and orientation of the vehicle while flying, will be important parameters in obtaining accurate measurements. While some researchers have performed wind tunnel tests to determine the required flow over a sensor for their specific sUAS platform, these results may not be generalizable to sUAS models not specifically tested.

High fidelity computational fluid dynamics (CFD) simulations have a tremendous predictive capability for investigating aircraft aerodynamics and performance. NASA Ames researchers have expertise in Cartesian CFD, a method that provides robust, automated meshing capability, which greatly reduces simulation turnaround time while maintaining high fidelity predictions. We propose to use this capability to characterize the effects of prop wash on airborne gas sensors both at altitude and near the ground. We will emphasize an approach that results in models that can be translated to any sUAS platform by developing universal rules based on basic aerodynamic principles.

3. Use of UASs to measure the albedo of snow in mountainous regions for Land Systems, Ecosystems, and Water Resources 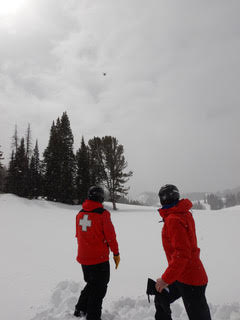 Earth’s albedo (relative reflectance) is a critical component for the planet’s energy balance calculations.  This project focuses on quantifying the physical albedo of mountain snowpack, where seasonal accumulation and melt cycles dramatically alter the albedo of the landscape. Because albedo varies considerably across time and space, Unmanned Aerial Systems (UASs) provide the flexibility to measure albedo at multiple scales and locations. The current means to measure albedo across landscapes rely on NASA satellites that offer a unique perspective from space, providing global-scale albedo products (i.e. MODIS and Landsat). The initial raw Earth Observations (EO) from space require in situ data to calibrate the satellite signal. However, scaling issues exist between in situ and satellite data, creating calibration and validation challenges for raw EO.

This project bridges the challenges associated with resolving fixed-position in situ data and EO. Recent technological advances in albedo sensors provide smaller, lighter units capable of being mounted to a single UAS. This project will:

This work proposes science related to the Land Resources, Ecosystems, and Water Resources mission areas of the USGS. Understanding how albedo and energy budgets change across broad and changing landscapes at high resolution helps resource managers and communities better prepare for change and improves their decision-making regarding natural resources and hazards.

4. An intermediate-range fixed-wing UAS for safe observation of volcanic activity

An intermediate-size UAS can be launched from a safe distance from any hazardous activity. Typically, the UAS may have to fly for at least 10 or 15 km and climb to altitudes of 10,000 or 15,000 feet to reach the active volcanic center. Once the on-site, the observation flight segment will begin, and the UAS will start making its observations using various specialized sensors. Since the volcano is unsafe to approach, there may be little operational information on current activity. Therefore, the UAS will need to send its monitoring streams back to the operating team in real time such that decisions on the best strategy for the observation segment can be made. Finally, the UAS will need to return safely to the staging area, bringing back all data and monitoring sensors.

Intermediate-size UAS would offer opportunities for various types of volcanic observation concurrently. A fixed nadir-looking camera with RTK precision geotagging capabilities would be utilized to acquire overlapping images to create topographic models of the volcano and measure topographic changes, such as lava effusion. Likewise, a small gimbaled or forward-looking video camera could provide real-time video feed for situational awareness, which will be especially important in developing measurement strategies at a volcano that is many kilometers away and perhaps not visible from the base of operations.

An area of particular interest is characterizing gas emissions during a crisis; as such measurements are often too dangerous to obtain in any other way. A sensor package for this purpose would monitor concentrations of the primary volcanic gases water vapor (H2O), carbon dioxide (CO2), sulfur dioxide (SO2), and hydrogen sulfide (H2S). These concentration measurements would be used to characterize the relative abundances of the primary gases in the volcanic emissions. The sensor package would also include an upward-looking ultra-violet spectrometer measuring the radiance of scattered sunlight above the aircraft. These measurements are used to determine the vertical column of sulfur dioxide above the UAS, which can then be used to determine total SO2 emission rate and, in combination with the plume speciation, the emission rates of all the primary volatile species.  Finally, the sensor package would need to record several environmental factors that are used to interpret the gas data: wind speed, wind direction, relative humidity, temperature, pressure and GPS track should all be measured.

Our goal is to develop a non-contact approach to measuring surface flow velocities using remotely sensed data acquired from an Unoccupied Aircraft System (UAS).  Ultimately, these velocity estimates could be coupled with bathymetric information (from which the channel’s cross-sectional area can be determined) and used to calculate river discharge.  By collecting data from the air, USGS staff will be able to obtain the high flow measurements crucial for establishing and updating rating curves (the relationship between water surface elevation, or stage, and discharge) while reducing the dangers associated with conventional in situ methods.  In addition, the use of a UAS will make data collection less labor intensive and more efficient, possibly resulting in significant long-term cost savings.

More specifically, we hypothesize that image time series acquired by a combination of visible and thermal cameras deployed from a UAS can be used along with Particle Image Velocimetry (PIV) algorithms to infer surface flow velocities with a level of accuracy and precision comparable to current field-based methods and thus suitable for operational streamflow measurement.  To test this hypothesis, we will work closely with the Intelligent Robotics Group at the NASA Ames Research Center to achieve the following objectives: 1) integrate visible and thermal cameras owned by the USGS onto a suitable UAS platform; 2) in addition, integrate a laser range finder that can be used to measure the distance to the water surface and thus establish the spatial scale of the images; 3) develop an Intelligent System (IS) capable of performing on-board, real-time data processing and PIV analysis and transmitting the results to an operator on the ground; and 4) produce a software interface for: (a) defining cross-sections and thus establishing flight plans; (b) inputting channel geometry when available;  (c) specifying data collection parameters such as the number of waypoints (i.e., measurement locations) where the UAS will pause, hover, and acquire an image time series while traversing the channel; (d) displaying PIV-derived surface flow velocity vectors on a live video feed; and (e) evaluating measurement quality.  In addition to basic testing of airworthiness and system functionality, the performance of the new UAS-based IS will be assessed by deploying the system above a river and collecting simultaneous velocity field data for validation.

6. The use of UAS to characterize health and environmental impacts of wildland fire smoke

The advent of UAS technology allows unprecedented access to wildland fire smoke plumes, eliminating personnel and equipment hazards during sample collection and logistical challenges of predicting plume movement that restrict ground-based work. When combined with the concurrent development of lightweight samplers and sensors, UAS-borne instrumentation allows us to obtain heretofore inaccessible data and samples. Obtaining real-time data fills significant observational gaps of plume composition, atmospheric reactions, and dispersion/deposition, and airborne sampling of the plume permits toxicity testing on particulate matter (PM) representative of real exposures, allowing us to avoid the use of ground-collected samples, which are typically modified in the environment. These data are critical for understanding the health impacts of PM and aerosols released by wildfires and prescribed burns.

This effort proposes to sample a wildland fire in situ to 1) characterize the plume composition, 2) collect PM for toxicity testing, and 3) determine the health implications. We propose to deploy a USGS UAS multicopter on a prescribed burn planned in Fall 2019 to sample both real-time constituents and cumulative PM solids for subsequent analysis. This work will link metadata on the burn (biomass, region, meteorology) with emissions composition/characterization and subsequent cardiopulmonary toxicity (determined by rodent instillation).

To our understanding, this combined effort of UAS plume sampling/characterization and toxicity testing is unprecedented, and the capability would be directly transferable to other potentially hazardous natural and anthropogenic air pollution.

We propose to use an array of UAS (3 to 5) to collect time-synchronized stereo optical imagery combined with Structure-from-Motion (SfM) techniques to capture instantaneous views of the 3D surface wave field. A wave field is typically composed of a large number of wave components with differing heights, periods and directions, known as the directional spectrum. A set of synchronous images will be used to produce a 3D point cloud and digital elevation model (DEM) for that instant in time. Using a sequence of these image-set data in time, spatial time-series processing (i.e., Fast Fourier Transform, FFT) will be applied to estimate the directional wave parameters (height, period, direction), similar to previous work using airborne radar data [Wright et al., 2001]. The wave parameters will be used to validate the empirical runup parameterization, as well as provide insight into cross-shore sediment transport processes, which are affected by wave magnitude and shape. Additionally, the system will collect image sets of the beach and dune, and using ground control points and SfM, the beach topography can be measured providing updated beach profile and slope data.

The ability to collect image sets of the wave field from the air allows for a relatively large water surface to be imaged. This allows for the transformation of the wave field from offshore, to wave breaking, to runup on the beach to be measured, eliminating the need for numerous in situ sensors that could not possibly have the same high resolution in the cross-shore direction. The mobility of this system allows for these wave transformation measurements and topographic profiles to be collected at intervals alongshore the beach.