How are Endocrine-Disrupting Compounds Moving Through the Food Web in Lake Mead National Recreation Area? Active

Water quality in the Lake Mead National Recreation Area (LAKE), particularly Las Vegas Bay, is affected by water coming from the Las Vegas Wash, an urban perennial stream whose water is comprised of treated wastewater and urban runoff coming from the Las Vegas metropolitan area.  Common carp collected from Las Vegas Wash and Las Vegas Bay and largemouth bass collected from Las Vegas Bay have impaired reproductive and endocrine health that have been shown to be caused by the presence of endocrine-disrupting compounds (EDCs) in water coming from the Las Vegas Wash. Understanding the movement of EDCs through the food web is critical in determining the effects of EDCs on all organisms including endangered species such as the razorback sucker and for making informed and effective management decisions on ways to control and mitigate sources of EDCs.  In addition, a new study started in 2017 looking at the effect of microplastics on the foodweb led by Austin Baldwin (ID WSC) has also been started to understand whether these plastics interrupt feeding and reproduction in the lake.

A variety of contaminants including nutrients, metals, perchlorate, and organic compounds are transported to the Las Vegas Wash from various sources.  Organic compounds are some of the most commonly found contaminants in the Wash.  Some of these organic compounds, such as DDT (dichlorodiphenyltrichloroethane), PCBs (polychlorinated biphenyls), PBDEs (polybrominated diphenyl ethers), PAHs (polycyclic aromatic hydrocarbons), personal care products, and human pharmaceuticals, are suspected of being Endocrine-Disrupting Compounds (EDCs).  The sources of EDCs to water in the Las Vegas Wash include diffuse sources such as urban runoff as well as concentrated historical industrial sources located along the Wash, and the release of tertiary treated wastewater from 4 wastewater treatment plants that serve the Las Vegas Metropolitan area.  EDCs have been found in treated and untreated wastewater in many areas of the United States and many EDCs are not completely removed by even the most advanced wastewater treatment processes.

EDCs can interfere with or disrupt endocrine and reproductive systems and can cause cancerous tumors, birth defects, and developmental disorders.  In fish, EDCs are thought to be especially disruptive of the larval or developmental stages altering sexual development, behavior and fertility, and causing feminization of male fish or masculinization of female fish.  Recent studies have shown that male common carp (Cyprinus carpio) collected from Las Vegas Bay and Las Vegas Wash have shown feminization with impaired endocrine and reproductive health.  Largemouth bass (Micropterus salmoides) collected in Las Vegas Bay have also shown symptoms of impaired reproductive health.  These adverse health effects have been shown to be caused by the presence of EDCs in water and/or sediment in these areas.  Recent studies have indicated improvement in the endocrine and reproductive health of common carp collected from in Las Vegas Bay since 1995 that may have come from enhanced wastewater treatment.

Recent studies have shown that certain microbial communities may degrade some organic chemicals, but more research is needed to determine if these breakdown products are harmful, and if there is sufficient microbial activity in Las Vegas Wash to allow sufficient breakdown of the chemicals to make them harmless.

Previous research on LAKE has identified the occurrence of EDCs in fish tissue from Lake Mead.  However, no studies have attempted to determine the pathway of these contaminants to fish including determining whether they are bioconcentrated or bioaccumulated. This study will examine the extent to which EDCs in aquatic organisms in LAKE are either bioconcentrated through direct uptake from water or bioaccumulated through the food web.  Understanding the pathways of EDCs to fish is critical to assessing impacts of EDCs to the entire aquatic ecosystem of LAKE.  If fish are accumulating EDCs directly from water or sediment the risk of adverse health effects may be relatively minor as individual species may be affected differently.  However, if fish are bioaccumulating EDCs through the food web the risk of adverse health effects is very broad as all secondary and tertiary consumers would be affected including endangered species such as the razorback sucker.  Management strategies to control the sources of EDCs to LAKE and protect and restore the ecosystem may differ depending on the mode of EDC accumulation in fish.

The main scientific questions to be answered include:

Samples of water, sediment, plankton, invertebrate tissue, and fish tissue have been collected and analyzed for a variety of EDCs.  Samples were collected at different depths in 3 sub-basins of LAKE; Las Vegas Bay, Boulder Basin, and Overton Arm. The Overton Arm site served as a reference site as samples of water, sediment, and fish tissue taken from a previous study showed minimal contamination in this area.  The bioavailable fraction of EDCs in the water column was measured using Semipermeable Membrane Devices (SPMD) and Polar Organic Chemical Integrative Samplers (POCIS).  Surface sediment samples were collected using a ponar sampler.  Samples of plankton were collected using plankton net.  Benthic invertebrates were collected using a D-net or hand picking.  Invertebrate tissue was composited prior to analysis with the exception of tissue of quagga mussels which was analyzed separately from other invertebrates. Samples of invertebrate organisms were identified to the lowest taxonomic resolution possible (generally family or genus) prior to compositing for analysis. In previous studies, fish near the top of the food web such as common carp and largemouth bass were sampled and analyzed for EDCs. This study focused on fish that are intermediate in the food web such as threadfin shad and bluegill.  These fish were collected in each basin using an electroshocking technique and their tissue composited for analysis.

Samples were analyzed for a variety of potential EDCs.  Fish and invertebrate samples were analyzed for PCBs, DDT and other pesticides, PBDEs, and various antibacterial and fragrance compounds.  Sediment and water samples were analyzed for a similar set of compounds as well as a small set of chemicals related to wastewater effluent.  Prior to analysis, samples from the SPMD and POCIS were screened using the yeast estrogen screen (YES). The YES assay provides a measure of total estrogenicity of chemicals present in the sample and can be helpful in determining if chemicals in the samples are acting as estrogens or estrogen mimics and thus could be causing intersex development or other endocrine disruption effects.  Tissue samples were processed to extract chemicals of interest using various specialized methods including gel permeation chromatography and adsorption chromatography.  All water and sediment samples and tissue extracts were analyzed using gas chromatography-mass spectrometry to identify organic compounds.

Data from the sampling and chemical analyses will be evaluated to determine the food web structure of LAKE.  Contaminants detected and their relative mass will be compared to the newly established food web structures so that contaminant pathways and mass transfer rates can be determined.  From this evaluation, the potential risk of EDCs and other contaminants to razorback suckers and other fish in LAKE can be identified relative to the source of the contaminants.

Lake Mead National Recreational Area (LMNRA) serves as critical habitat for several federally listed species and supplies water for municipal, domestic, and agricultural use in the Southwestern U.S. Contaminant sources and concentrations vary among sub-basins within LMNRA. To investigate whether environmental contaminant exposure is associated with alterations in male common carp (Cyprinus carpio)
By
Wetland and Aquatic Research Center 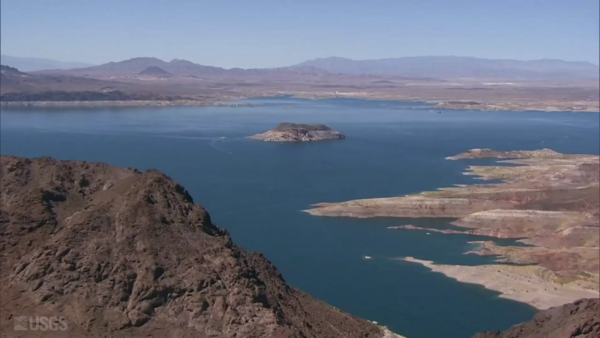 Below are publications associated with this project. You can also download a bibliography:

Movement of synthetic organic compounds in the food web after the introduction of invasive quagga mussels (Dreissena bugensis) in Lake Mead, Nevada and Arizona, USA

Introductions of dreissenid mussels in North America have been a significant concern over the last few decades. This study assessed the distribution of synthetic organic compounds (SOCs) in the food web of Lake Mead, Nevada/Arizona, USA and how this distribution was influenced by the introduction of invasive quagga mussels. A clear spatial gradient of SOC concentrations in water was observed betwe
By
Water Resources, Ecosystems, Cooperative Research Units, California Water Science Center, Columbia Environmental Research Center
May 4, 2020

Microplastics are an environmental contaminant of growing concern, but there is a lack of information about microplastic distribution, persistence, availability, and biological uptake in freshwater systems. This is especially true for large river systems like the Colorado River that spans multiple states through mostly rural and agricultural land use. This study characterized the quantity and morp
By
Water Resources, California Water Science Center, Idaho Water Science Center, Washington Water Science Center
April 2, 2018

Lake Mead National Recreational Area (LMNRA) serves as critical habitat for several federally listed species and supplies water for municipal, domestic, and agricultural use in the Southwestern U.S. Contaminant sources and concentrations vary among the sub-basins within LMNRA. To investigate whether exposure to environmental contaminants is associated with alterations in male common carp (Cyprinus
By
Ecosystems, Columbia Environmental Research Center, Wetland and Aquatic Research Center
November 12, 2017

The role of microbial communities in the degradation of trace organic contaminants in the environment is little understood. In this study, the biotransformation potential of 27 pharmaceuticals and endocrine-disrupting compounds was examined in parallel with a characterization of the native microbial community in water samples from four sites variously impacted by urban run-off and wastewater disch
By
Water Resources
April 11, 2017

Reversible reduction of estrone to 17β-estradiol by Rhizobium, Sphingopyxis, and Pseudomonas isolates from the Las Vegas Wash

Environmental endocrine-disrupting compounds (EDCs) are a growing concern as studies reveal their persistence and detrimental effects on wildlife. Microorganisms are known to affect the transformation of steroid EDCs; however, the diversity of estrogen-degrading microorganisms and the range of transformations they mediate remain relatively little studied. In mesocosms, low concentrations of added
By
Water Resources
July 1, 2015

Invasive quagga (Dreissena bugnesis) and zebra (Dreissena ploymorpha) mussels have rapidly spread throughout North America. Understanding the relationships between environmental variables and quagga mussels during the early stages of invasion will help management strategies and allow researchers to predict patterns of future invasions. Quagga mussels were detected in Lake Mead, NV/AZ in 2007, we m
By
Water Resources
February 27, 2015

Lakes Mead and Mohave, which are the centerpieces of Lake Mead National Recreation Area, provide many significant benefits that have made the modern development of the Southwestern United States possible. Lake Mead is the largest reservoir by volume in the nation and it supplies critical storage of water supplies for more than 25 million people in three Western States (California, Arizona, and Nev
By
Water Resources, Nevada Water Science Center
January 1, 2013

Limnologists recently have developed an interest in quantifying benthic resource contributions to higher-level consumers. Much of this research focuses on natural lakes with very little research in reservoirs. In this study, we provide a contemporary snapshot of the food web structure of Lake Mead to evaluate the contribution of benthic resources to fish consumers. In addition, we document the ava
By
Water Resources, Nevada Water Science Center
January 1, 2013

In 2007 an invasive dreissenid mussel species, Dreissena bugensis (quagga mussel), was discovered in Lake Mead reservoir (AZ–NV). Within 2 years, adult populations have spread throughout the lake and are not only colonizing hard substrates, but also establishing in soft sediments at depths ranging from 1 to >100 m. Dreissena bugensis size class and population density distribution differs between b
By
Water Resources, Nevada Water Science Center
June 14, 2012

Bottom sediment as a source of organic contaminants in Lake Mead, Nevada, USA

Treated wastewater effluent from Las Vegas, Nevada and surrounding communities' flow through Las Vegas Wash (LVW) into the Lake Mead National Recreational Area at Las Vegas Bay (LVB). Lake sediment is a likely sink for many hydrophobic synthetic organic compounds (SOCs); however, partitioning between the sediment and the overlying water could result in the sediment acting as a secondary contaminan
By
Ecosystems, Columbia Environmental Research Center