The New England Water Science Center has launched a new project in cooperation with the U.S. Environmental Protection Agency’s (EPA) Long Island Sound Study (LISS) to determine how much nitrogen is entering into Long Island Sound (LIS) via groundwater from small tributaries within the Sound’s watershed.

Long Island Sound has been contaminated by nutrient pollution over several decades from municipal and septic wastewater inputs and fertilizer application. An overabundance of nitrogen in LIS causes excessive algal growth leading to low dissolved oxygen levels and the loss of critical marine life and habitat. Nitrogen loading from the larger tributaries of Long Island Sound have substantially declined since 2014. However, little is known about how much of that nutrient loading comes from the narrower creeks and streams that feed into the wider, deeper rivers that flow into LIS. Measuring the amount of nutrients that enter into the small tributaries of the LIS watershed through groundwater will inform researchers as to how much of the coastal pollution originates from non-urban areas.

“There’s been a lot of effort put into reducing nitrogen that’s coming from what we call point sources, things like wastewater treatment plants, which is probably the biggest one when we think about nitrogen,” explained Hydrologist Janet Barclay, a project collaborator.  “But a lot less attention has been put into understanding the nitrogen that’s coming through the groundwater, which is predominantly coming from things like septic systems and agricultural or lawn fertilizers, which are spread out across the landscape.”

This study will provide a “snapshot” of the nitrogen inputs from groundwater distributed across the landscape by eliminating the influence of nutrient loading from runoff, diversions to public water supply, and wastewater treatment plants.

A nonpoint source of water pollution is defined as any contaminant source that is not distinctly visible and defined. Plant fertilizers from farms and neighborhoods and private onsite septic systems are the most common nonpoint sources of nitrogen loading through groundwater. Typical residential septic systems do not treat for nitrogen, a common component of urine, causing the nutrient to seep into the groundwater from the leach field. Then, the nitrogen-contaminated groundwater flows to the nearest waterway to which it connects. Likewise, nitrogen that has seeped into groundwater from fertilizer also travels to the adjoining streams via groundwater.

To determine how much of the total nitrogen in LIS comes from nonpoint sources of water pollution from residential areas, sampling in this study is performed when precipitation is not abnormally low or high, also known as base-flow conditions. This enables the measurements to be representative of the average groundwater discharge.

Led by Hydrologic Technician Kaitlin Laabs, the project team is analyzing water samples from 46 small tributaries located in the southern part of the LIS watershed within New York, Rhode Island, and Connecticut. Each site is located within an agricultural or residential area and cover a broad range of geologic conditions, septic system densities, and expected nitrogen loads. They are conducting synoptic sampling—collecting water samples from many locations within a short time-frame—during growing season and non-growing season to compare how photosynthetic activity affects nitrogen levels. Non-growing samples were taken over two days in April 2022, and the growing season samples will be taken in summer 2022. Data collection will be completed before fall when leaves enter the waterways and raise carbon and phosphorus levels.

The water samples are analyzed for various forms of nitrogen and phosphorus, as well as bromide and chloride. Field parameters of pH, water temperature, dissolved oxygen, and specific conductance, which is a measure of water salinity, are also recorded.

The project will render a published data release on the water quality and streamflow data from the sites with the potential for the development of a more detailed report. The data collection will also supplement and update a groundwater nitrogen model of the north coast of Long Island Sound. Created by Barclay, the model will simulate nitrogen loads to streams and coastal water bodies from groundwater discharge. This ongoing project to simulate groundwater flow and nitrogen loading throughout coastal Connecticut began in 2018 and will continue through 2023. The addition of this data to Barclay’s model will enable her to tune the model to reflect measured nitrogen loads, as well as the nitrogen inputs and removal within the groundwater, more accurately. 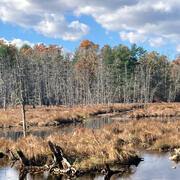 During the past 20 years, nitrogen loads to Long Island Sound (LIS) have been substantially reduced in large watersheds affected by municipal wastewater loads.
Learn More
link 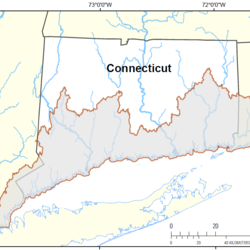