Aquatic systems in and around Long Island Sound (LIS) provide a variety of ecological and economic benefits such as flood and storm protection, water filtration, recreation, commercially and recreationally important fish and bird populations, and carbon sequestration. In 1985, the U.S. Environmental Protection Agency, States of Connecticut and New York, and other organizations formed the Long Island Sound Study to protect and restore LIS. In 1994, the LISS developed a Comprehensive Conservation and Management Plan (CCMP) to guide LIS restoration efforts. Reducing nitrogen loads to surface waters is identified in the CCMP as a priority for the region. Although measurable improvements in water quality have been made through controls on major point sources such as wastewater treatment plants, the CCMP identified reduction of nitrogen contamination from sources that are smaller, more diffuse, or more distant from LIS as an ongoing major challenge. Disposal of domestic wastewater to septic systems and application of inorganic fertilizers are the major nonpoint sources of nitrogen in the watersheds draining to LIS. Nonpoint source nitrogen can run off directly to streams and other surface-water bodies during storm events, or infiltrate to groundwater, affecting surface waters over longer periods of time. Legacy nitrogen loads from groundwater, directly to LIS and to stream networks in the watersheds draining to LIS, are difficult to estimate and relatively poorly understood.

Nitrogen loads to sensitive coastal waters are affected by groundwater residence times (or travel times). Travel times much longer than a year introduce lags between recharge at the water table and discharge to receiving waters. Lags will result in delays between nitrogen input reductions and groundwater load reductions. Travel times much shorter than a year could mean that groundwater nitrogen loads are seasonably variable. The importance of lags or seasonal loads can be evaluated by calculating travel times through groundwater flow systems to surface-water discharge points such as streams, ponds, or coastal embayments.

In the first phase of this study (2018 – 2020) a groundwater flow model of the watersheds draining to LIS along the Connecticut coast was developed to provide a regional tool to evaluate the groundwater flow systems in these watersheds. The model will serve as a framework for understanding the groundwater component of flow to the coastal embayments of LIS and for conducting more-detailed assessments of priority areas (for example, groundwater discharge rates, travel times, and nitrogen loading to coastal embayments in primary tier watersheds). Phase one also included a demonstration analysis of groundwater transport of nitrogen within the Niantic River watershed.

In the second phase of this study (2020 – 2022) the groundwater flow model is being refined and the nitrogen transport simulation is being extended to all coastal watersheds in Connecticut. Calculating groundwater nitrogen loads along with residence times will greatly enhance the ability of resource managers to prioritize nitrogen reduction strategies to the areas where the loads from groundwater are highest and the application of these strategies will be most beneficial. 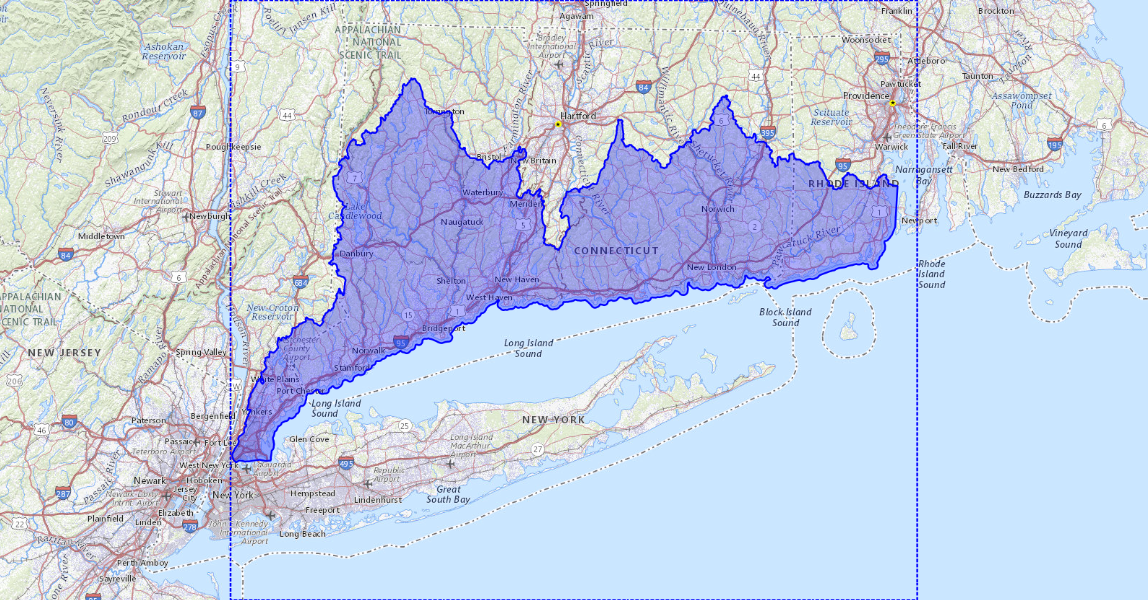