Concentrations of arsenic in four segments (reaches) of the Wallkill River and one segment of the Papakating Creek (a major tributary to the Wallkill River) have been found to exceed the New Jersey surface-water-quality standard of 0.0170 micrograms per liter. As a result, the U.S. Geological Survey (USGS) New Jersey Water Science Center, in cooperation with the New Jersey Department of Environmental Protection (NJDEP), initiated a study to determine the sources of arsenic to the Wallkill River to support the NJDEP in its effort to develop a total maximum daily load (TMDL) for arsenic in the watershed. Possible sources of arsenic in the watershed include geologic materials, pesticides, herbicides, septic-system effluent, industrial discharges, and residual material from historic ore smelting and coal burning. Once arsenic reaches the river, its concentrations are affected by geochemical and physical processes that include adsorption to and desorption from clays, iron-manganese oxides, and organic matter; transport on suspended sediments; and exchange between ground water and surface water.

The overall objective of the project is to identify sources of arsenic to the Wallkill River Watershed. Individual objectives include:

Arsenic concentrations in water from the Wallkill River and Papakating Creek have been found to exceed the SWQS. Background data needs to be collected to support establishment of TMDLs by NJDEP at five sites on the Wallkill and one on the Papakating. Ground water in wells in the watershed also may tap water with arsenic levels that could exceed the proposed NJDWS. Potential sources of arsenic to water from the Papakating Creek and the Wallkill River include runoff containing residues of land applications of arsenical compounds, arsenic released from direct discharges to the streams, discharge of ground water containing trace elements contributed by geologic materials, and desorption of arsenic from stream sediments derived from soils and geologic materials.

The study objectives are to

GEOLOGY OF THE WALLKILL RIVER BASIN

The river begins at a small dam on Lake Mohawk (figure 3). From Lake Mohawk, it flows north through Franklin Pond (figures 1 and 2), through wetlands, and across the New Jersey-New York border, and ultimately discharges to the Hudson River. Along its course, the river encounters several different geologic substrates (figure 4). It flows through valley-fill glacial deposits that overlie faulted carbonate rocks that consist of dolomite at the headwaters; marble (with some granite and gneiss) in the middle segment; and dolomite again at the extreme northern (downstream) end. The valley fill consists of sediments eroded from the geologic materials. Each of these lithologic units may contribute arsenic to the ground water, which then discharges to the river.

POSSIBLE SOURCES OF ARSENIC TO THE WALLKILL RIVER

Selected locations along the river are shown in figures 5 to 7, which illustrate some of the possible anthropogenic sources and environments that may affect arsenic concentrations in the river. At its origin at Lake Mohawk, the Wallkill River is surrounded by unsewered residential land and a golf course. The outfall of Lake Mohawk is shown in figure 5.

The river flows north from Lake Mohawk to Franklin Pond (figs. 1, 2, and 6). The Franklin area is famous for the now-closed Franklin mines, where substantial quantities of rare zinc-bearing ore minerals were extracted from the early 1800s until 1986. Iron ores were roasted near Franklin Pond (fig. 6) in the 18th and 19th centuries. A short distance (about 1,000 feet) downstream from the pond and bordering the Wallkill River is the Buckwheat Dump, which contains tailings from the zinc-ore mining. Because zinc-bearing ores contain arsenic, sediments derived from weathering of the rock formation, as well as the tailings, are possible sources of arsenic to the river.

About 4.5 miles downstream from Franklin Pond, the river leaves the bedrock part of the basin and widens as it flows over glacial outwash. Before it leaves the State, it flows through the Wallkill River National Wildlife Refuge (fig. 7), a 4,500-acre protected, restricted-access area made up of grasslands, upland forests and shrublands, and wetlands that includes a 9-mile stretch of the Wallkill River. The refuge was established in 1991 by the U.S. Fish and Wildlife Service.

Water samples were collected at all five of the sites on the river's main stem and at the nine sites on its eight tributaries (figures 1-3) in the fall of 2004. The five main-stem sites were sampled again in early spring 2005, when discharge was relatively low. In both fall and spring sampling rounds, streamwater samples were collected and pH, dissolved-oxygen concentration, specific conductivity, and flow were measured. During the fall 2004 sampling, bed-sediment samples also were collected. Water samples were analyzed for major ions (calcium, magnesium, sodium, potassium, chloride, and sulfate), nutrients (nitrogen and phosphorus species), organic carbon, and trace elements (arsenic, barium, beryllium, cadmium, chromium, copper, iron, lead, manganese, molybdenum, nickel, uranium, vanadium, and zinc). Bed-sediment samples were analyzed for major ions and trace elements. At two of the sites (WAL-2 and WAL-4), water samples were collected multiple times over a 24-hour period to determine whether arsenic concentrations vary diurnally with temperature and pH.

Because arsenic exists in several forms in the environment, the arsenic speciation was determined in water samples collected at the sites along the main stem of the river. The goal was to determine whether arsenic is present in the oxidized form or the more toxic reduced form. Concentrations of trace elements other than arsenic are being used to develop a chemical "fingerprint" that may aid in identifying the different possible sources of arsenic.

In addition to the streamwater samples, water samples collected from two depths in a flooded mine shaft at the Sterling Hill Mine and Museum in Ogdensburg, N.J., were analyzed. The zinc ores in the Sterling Hill Mine area are similar to the ore extracted from the Franklin Mine, and contain many arsenic-bearing minerals. Zinc ores were mined from the early 1800s until the mine's closure in 1986. The water from the flooded mine shaft was sampled and subsequently analyzed to determine whether minerals in the mine could be leaching arsenic to the ground water and, ultimately, to the river.

Soil cores have been collected from the edge of Franklin Pond to determine the arsenic content of the soils. Temporary piezometers were installed at various locations in the riverbed to study the geochemistry of the water at the ground-water/surface-water interface. During the summer of 2005, samples of ground-water discharge were collected along the river's gaining reaches to determine whether ground water is a major contributor of arsenic to the river system.

Photographs courtesy of Michael J. Deluca and Richard L. Walker of the USGS.
Thanks are given to Susan Colarullo and Kara Watson, also of the USGS, for their assistance with land-use and geologic maps.

DISCLAIMER: This webpage contains information about completed or inactive projects from the NJ Water Science Center.  It has been created for historical purposes and may be a utility to locate published information.  This page should not be considered an authoritative source.  You are encouraged to contact the NJ WSC for more current information. 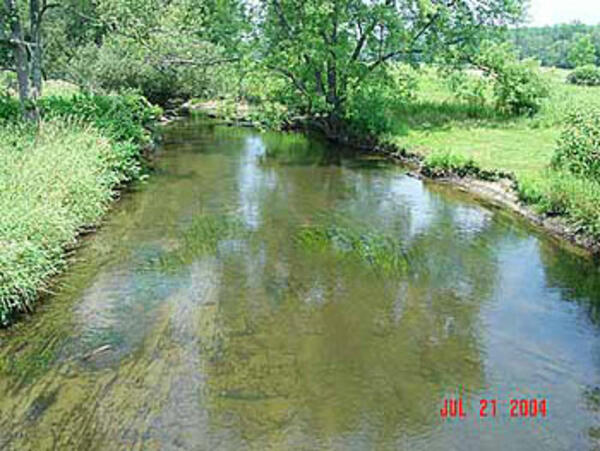 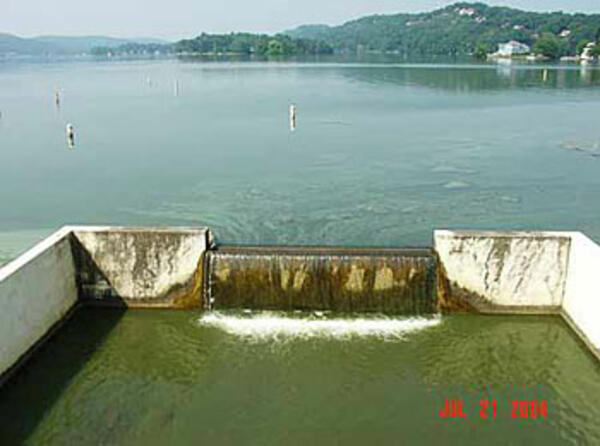 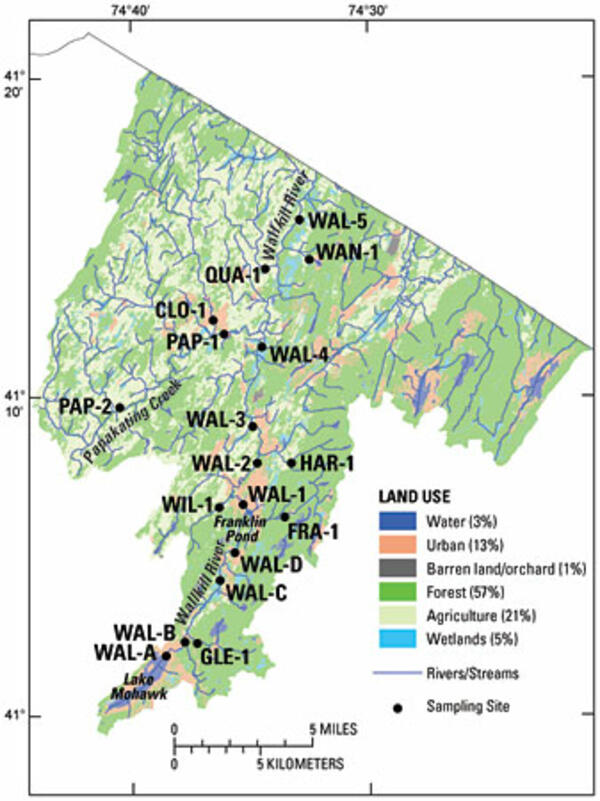 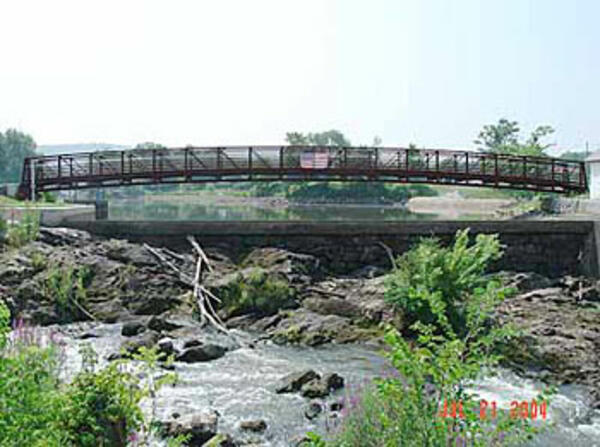 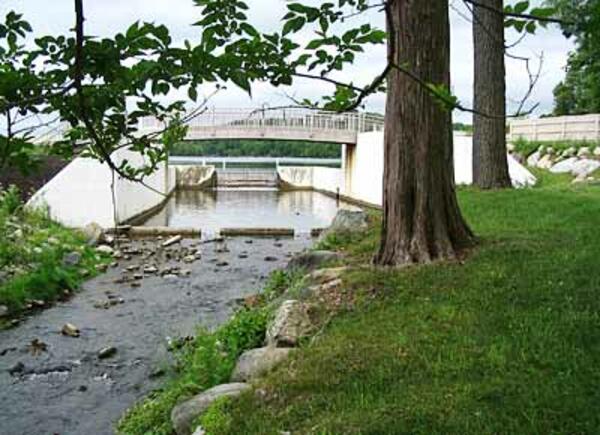