Groundwater is essential for water supply and plays a critical role in maintaining the environmental health of freshwater and estuarine ecosystems in the Atlantic Coastal basins of New Jersey. The unconfined Kirkwood-Cohansey aquifer system and the confined Atlantic City 800-foot sand are major sources of groundwater in the area, and each faces different water-supply concerns. The U.S. Geological Survey (USGS), in cooperation with the New Jersey Department of Environmental Protection (NJDEP), conducted a study to simulate the effects of withdrawals in the Kirkwood-Cohansey aquifer system, the Atlantic City 800-foot sand, and the Rio Grande water-bearing zone and to evaluate potential scenarios. The study area encompasses Atlantic County and parts of Burlington, Camden, Gloucester, Ocean, Cape May, and Cumberland Counties. The major hydrogeologic units affecting water supply in the study area are the surficial Kirkwood-Cohansey aquifer system, a thick diatomaceous clay confining unit in the upper part of Kirkwood Formation; the Rio Grande water-bearing zone; and the Atlantic City 800-foot sand of the Kirkwood Formation.

A groundwater flow model of the Kirkwood-Cohansey aquifer system, the Rio Grande water-bearing zone, and the Atlantic City 800-foot sand was developed and calibrated using water-level data from 148 wells and base-flow data from 22 gaging or low-flow partial record stations. The Kirkwood-Cohansey aquifer system within the Great Egg Harbor River and the Mullica River Basins was simulated on a monthly basis from 1998 through 2006. An existing regional model of the New Jersey Coastal Plain was revised to provide boundary conditions for the Great Egg Harbor and Mullica River Basin model (referred to as the Great Egg-Mullica model). In the Great Egg-Mullica model, monthly groundwater recharge rates used in the model ranged from 10–15 inches per year in 2001 to 20–25 inches per year in 2005. The mean-absolute error for 10 of the 14 long-term hydrographs used in model calibration was less than 5 ft. Groundwater flow budgets for the Great Egg-Mullica model calibration periods, May 2005 and September 2006, and for the entire model calibration period 1998 to 2006, showed that nearly 70 percent of the water entering the Atlantic City 800-foot sand came from the horizontal connection with the Kirkwood-Cohansey aquifer system in updip areas.

The groundwater flow model was used to simulate scenarios under three possible conditions: average 1998 to 2006 withdrawals (Average scenario), full-allocation withdrawals (Full Allocation scenario), and projected 2050-demand withdrawals (2050 Demand scenario). Withdrawals in the Full Allocation scenario are nearly twice the withdrawals from the Average scenario, primarily because of the potential for large agricultural withdrawals if all allocations are used. Withdrawals for the 2050 Demand scenario are about 50 percent greater than those for the Average scenario, primarily due to expected increases in withdrawals for public supply. Monthly base-flow depletion criteria were determined using the Low-Flow Margin method, currently under consideration by NJDEP, to estimate available water on an annual basis at the Hydrologic Unit Code 11 (HUC11) level and to determine whether a water-supply deficit exists. Simulations of various groundwater-withdrawal scenarios were made using the calibrated model, and results were compared with baseline conditions (no withdrawals) to determine where and when base-flow deficits may be occurring and may be expected to occur in the future. Scenarios were simulated to assess base-flow depletion that could occur from different groundwater-withdrawal situations. In the Average scenario, deficits occurred in 7 of the 14 subbasins. In the Full Allocation scenario, deficits occurred in 11 of the subbasins. In the 2050 Demand scenario, deficits occurred in 9 of the 14 subbasins. The largest deficits occurred in the Absecon Creek subbasin because the base-flow depletion criteria for this subbasin is small due to the surface-water diversions that are already occurring there and because existing groundwater withdrawals in the subbasin have resulted in base-flow depletion under current (1998–2006) conditions. Three adjusted scenarios, variations of the Average, Full Allocation, and 2050 Demand scenarios, were simulated; for the adjusted scenarios, the withdrawals were modified in stages with the intent to successively eliminate or minimize the base-flow deficits. Modifications included shifting withdrawals to a deeper part of the Kirkwood-Cohansey aquifer system, implementing seasonal conjunctive use of shallow and deep aquifers, and specifying reductions in withdrawals within a HUC11 subbasin in deficit. The adjusted scenarios are intended to show the relative effectiveness of each of the three approaches in reducing the deficits. Most of the deficits under the Average, Full Allocation, and 2050 Demand scenarios were eliminated by reductions in withdrawals or allocations. Shifting withdrawals to a deeper part of the Kirkwood-Cohansey aquifer system or seasonal conjunctive use did not eliminate deficits for any subbasin. Reductions in withdrawals accounted for more than 95 percent of the total reduction of deficits in all but one subbasin. 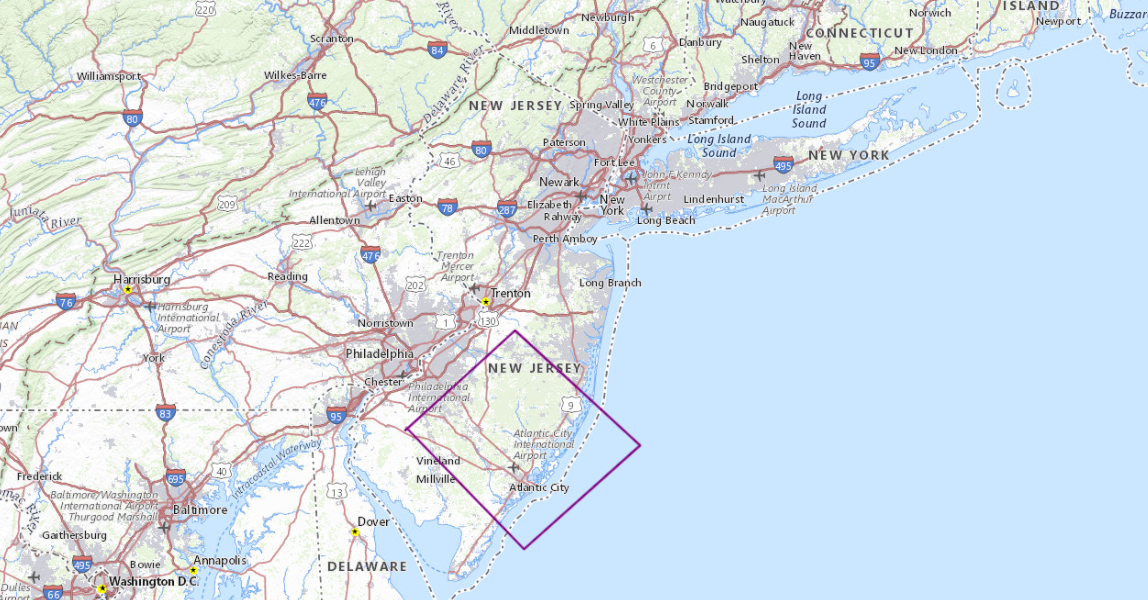 Groundwater is essential for water supply and plays a critical role in maintaining the environmental health of freshwater and estuarine ecosystems in the Atlantic Coastal basins of New Jersey. The unconfined Kirkwood-Cohansey aquifer system and the confined Atlantic City 800-foot sand are major sources of groundwater in the area, and each faces different water-supply concerns. The U.S. Geological
By
Water Resources, New Jersey Water Science Center