By Amleto A. Pucci, Jr., Daryll A. Pope, and JoAnn M. Gronberg

The Potomac-Raritan-Magothy aquifer system in Middlesex and Monmouth Counties in the northern Coastal Plain of New Jersey consists primarily of unconsolidated Cretaceous sediments, which are divided into the upper and middle aquifers and confining units. These units, which strike northeast-southwest along the Fall Line, dip and thicken to the southeast. The upper aquifer consists primarily of the Old Bridge Sand Member of the Magothy Formation, which is composed of coarse-grained sands, localized thin clay beds, and younger surficial sands and gravels in and near the outcrop. Transmissivity ranges from 1,760 to 19,400 ft2/d (feet squared per day) and tends to be higher in updip areas. Estimated withdrawals from the upper aquifer in the northern Coastal Plain were approximately 42 Mgal/d (million gallons per day) in 1986. Cones of depression whose centers range from 36 to 42 ft (feet) below sea level have developed as a result of these withdrawals. The upper aquifer is confined throughout most of the northern New Jersey Coastal Plain by clays and silts of the Cretaceous Woodbury Clay and Merchantville Formation and younger sediments of the Magothy Formation. This confining unit generally is greater than 200 ft thick. The simulated vertical hydraulic conductivity for the confining unit ranges from 8.4 x 10-5 to 5.6 x 10-3 feet per day; interpreted vertical hydraulic conductivities generally are lower except in southwestern Middlesex County, where the vertical hydraulic conductivities of the confining unit are higher.

The middle aquifer consists primarily of the Farrington Sand Member of the Cretaceous Raritan Formation and surficial Holocene and Miocene sands and gravels in its outcrop area. It also can include the uppermost sands of the Cretaceous Potomac Group in parts of Monmouth County. The middle aquifer is composed of fine to coarse sand that contains some lignite and pyrite, and, locally, some clay beds. It pinches out in the northern part of Sayreville Township, near Raritan River. The transmissivity of the aquifer ranges from 2,140 to 13,800 ft2/d and tends to decrease in the northern part of the northern Coastal Plain of New Jersey where the aquifer thins. A poorly permeable confining unit composed mostly of clays and silts of the Woodbridge Clay Member of the Raritan Formation overlies the aquifer in most of this area. The confining unit generally is greater than 100 ft thick, although it thins and is sandy in the southwestern part of Middlesex County, where a good hydraulic connection exists between the middle and upper aquifers. Estimated withdrawals from the middle aquifer in the northern Coastal Plain were about 22 Mgal/d in 1986. These withdrawals have caused cones of depression whose centers range from 77 to 93 ft below sea level.

A finite-difference, quasi-three-dimensional groundwater flow model was developed to simulate groundwater flow in the aquifer system. The confined and unconfined areas of the upper and middle aquifers were modeled as separate layers. The model was calibrated primarily by adjusting vertical hydraulic conductivity in the confining units and horizontal hydraulic conductivity in the aquifers, then matching simulated and measured groundwater levels for the period 1896-1986 and simulated and interpreted potentiometric surfaces under predevelopment conditions and in 1984.

For the predevelopment period, the total flow into and out of the upper and middle aquifers is 35 and 21 Mgal/d, respectively. Recharge to the aquifer system is from direct recharge in the unconfined areas and from vertical leakage through overlying confining units. The main recharge areas are the topographically high areas in southwestern Middlesex County for both aquifers, in the eastern Sayreville area for the upper aquifer, and north of the Raritan River for the middle aquifer. Most groundwater discharges to low-lying regional surface-water drains (streams), which flow into the South River.

For 1984 transient conditions, the total groundwater flow into and out of the upper and middle aquifers is 61 and 34 Mgal/d, respectively. The largest amount of recharge is from direct recharge in the unconfined areas, but some recharge also is derived from vertical leakage through the Merchantville-Woodbury confining unit, captured groundwater discharge to streams, and induced inflow at artificial-recharge facilities. Regional flow is from recharge areas toward major cones of depression.

Sensitivity analysis showed that the model was useful for representing flow in the system, especially in the confined-aquifer areas. Model representation of lateral and vertical boundary conditions was judged acceptable. Simulation results were less sensitive to changes in aquifer properties in the unconfined areas of the aquifers and to changes in storage in the confining units. Sensitivity analysis and calibration of hydraulic parameters and conditions showed that the distribution of hydraulic head was sensitive to changes in horizontal hydraulic conductivity in the aquifers, vertical hydraulic conductivity in the confining units, magnitudes of groundwater withdrawals, and initial hydraulic head in aquifer outcrop areas.

Reversal of groundwater gradients has caused saltwater intrusion in the two aquifers. Chloride concentrations in water from the upper aquifer in Keyport and Union Beach Boroughs were as high as 2,100 mg/L (milligrams per liter) in 1986. The intrusion has not increased significantly since well fields in the area were closed in the late 1970's. Elevated chloride concentrations also were measured in Keanesburg Borough in 1986. In both of these areas, saltwater has entered the upper aquifer from the Bay because of movement of the freshwater-saltwater interface in response to increasing groundwater withdrawals.

Chloride concentrations in well-water samples from the middle aquifer were as high as 6,000 mg/L in Sayreville Borough in 1987; concentrations in samples from drive-point wells from the same aquifer near the Washington Canal, the main source of saltwater, were as high as 7,100 mg/L. The migration of the saltwater front at about 470 feet per year to the southeast is influenced mainly by a thinning of the middle aquifer, which constrains flow, and by the locations of regional cones of depression caused by groundwater withdrawals. 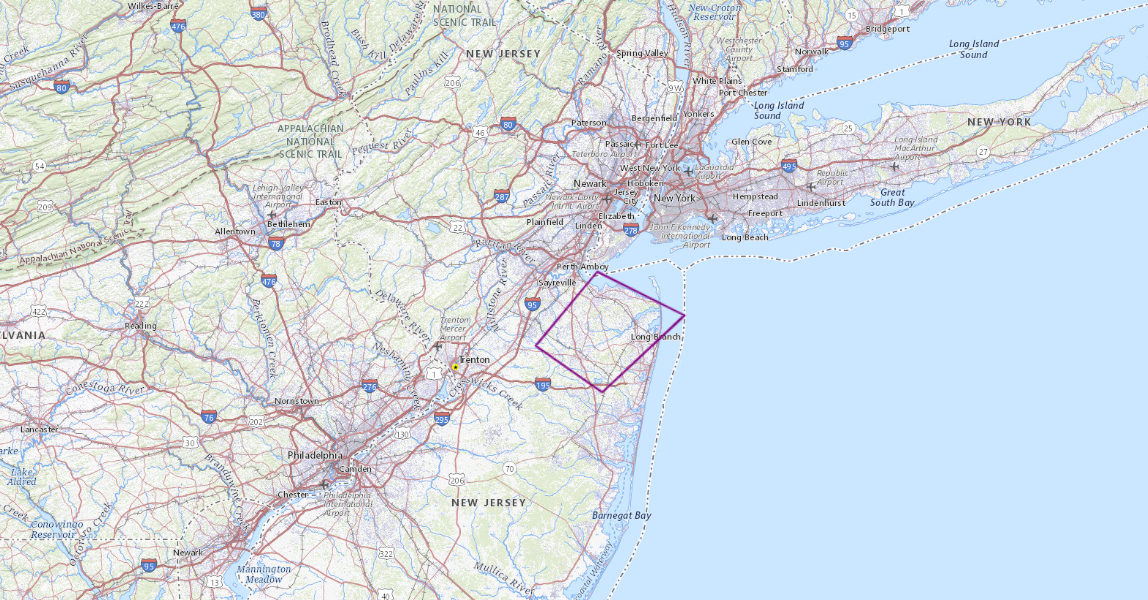