Also available is the DATA RELEASE for a particle tracking analysis using the Southern Ocean model provided above.

Freshwater discharging to the Barnegat Bay-Little Egg Harbor estuary from streams and groundwater is essential to maintaining the ecology of the bay. Examination of selected stress periods indicates that simulated base flow in streams flowing into the Barnegat Bay-Little Egg Harbor estuary is reduced by as much as 49 cubic feet per second for 2000 to 2003 withdrawal conditions when compared with no-withdrawal conditions.

In the three confined aquifers, water levels during periods of low recharge and high withdrawals, and high recharge and low withdrawals, were examined to determine seasonal effects on the confined flow systems. The simulated potentiometric surface of the Rio Grande water-bearing zone and the Atlantic City 800-foot sand during selected stress periods indicates substantial declines from no-withdrawal conditions to 2000–03 conditions as a result of groundwater withdrawals. Cones of depression in Toms River Township, Seaside Heights and Seaside Park Boroughs, and Barnegat Light Borough developed in the potentiometric surface of the Piney Point aquifer in response to withdrawals.

Maximum-allocation withdrawals decreased flow out of the Kirkwood-Cohansey aquifer system to constant head cells, increased flow out of the aquifer system to adjacent and lower layers, and reduced groundwater discharge to streams when compared with 2000–03 withdrawal conditions. Increases in withdrawals from the Rio Grande water-bearing zone, the Atlantic City 800-foot sand, and the Piney Point aquifer result in an increase in simulated net groundwater flow into these aquifers. Base-flow reduction from 2000–03 conditions to maximum-allocation conditions of 25 to 29 cubic feet per second in all streams draining to the Barnegat Bay-Little Egg Harbor also is indicated. Potentiometric surfaces of the Rio Grande water-bearing zone, Atlantic City 800-foot sand, and the Piney Point aquifer during two stress periods of simulated maximum-allocation withdrawal conditions indicated the expansion of several cones of depression developed during 2000–03 withdrawals.

Simulation of average 2000–03 withdrawal conditions indicated the extent to which the groundwater-flow system is susceptible to potential saltwater intrusion into near-shore wells. Travel time from recharge to discharge location ranged from 11 to approximately 50,700 years in near-shore Kirkwood-Cohansey aquifer system wells. Those in Seaside Heights Borough, in Island Beach State Park (Berkeley Township), and in Ship Bottom Borough have particle travel times from 140 to 12,000 years and flow paths that originated under Barnegat Bay or the Atlantic Ocean from the simulation of average maximum-allocation withdrawal conditions.

Travel time along flow paths to wells screened in the Rio Grande water-bearing zone and the Atlantic City 800-foot sand from recharge to discharge point ranged from nearly 530 years to greater than 3.73 million years from the simulation of aver-age 2000–03 withdrawal conditions. Particle tracking indicated that most wells screened in these aquifers derived a large part of their recharge from the Oswego River Basin, with a small portion of flow originating either beneath Barnegat Bay or to the east beneath the Atlantic Ocean. Travel time along flow paths that start beneath either Barnegat Bay or the Atlantic Ocean ranged from 2,300 to approximately 134,000 years from the simulation of average maximum-allocation withdrawal conditions. 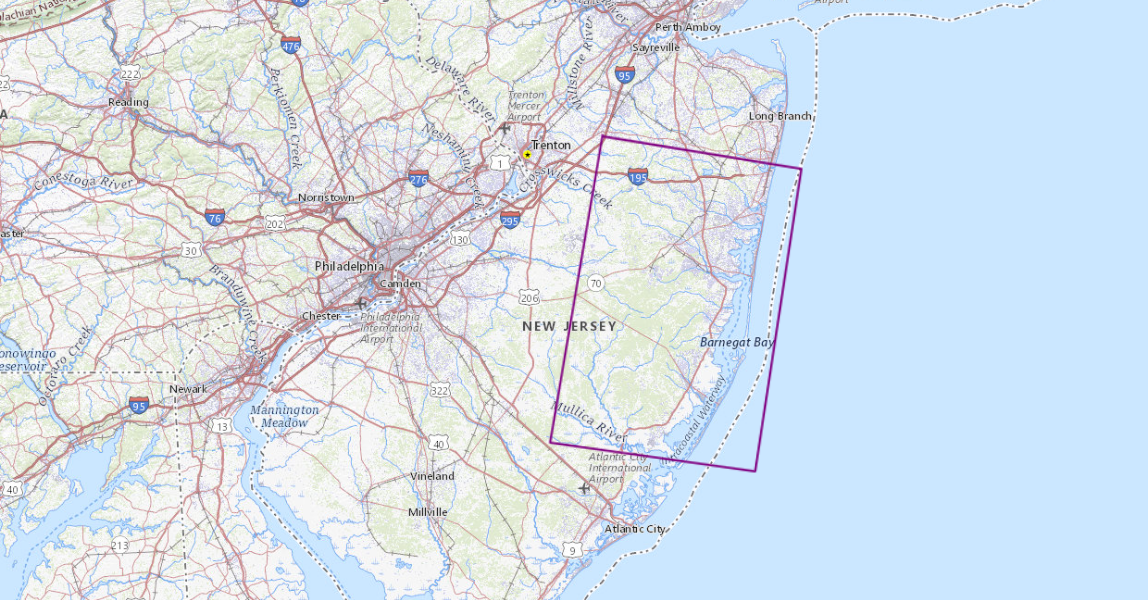 Elevated concentrations of nitrogen in groundwater that discharges to surface-water bodies can degrade surface-water quality and habitats in the New Jersey Coastal Plain. An analysis of groundwater flow in the Kirkwood-Cohansey aquifer system and deeper confined aquifers that underlie the Barnegat Bay–Little Egg Harbor (BB-LEH) watershed and estuary was conducted by using groundwater-flow simulati
By
Water Resources, New Jersey Water Science Center
October 21, 2016