Hydrogeology of, Numerical Groundwater Flow Model of, and Simulated Effects of Groundwater Development in, the Upper Maurice River Basin Area

By Stephen J. Cauller and Glen B. Carleton

The unconfined Kirkwood-Cohansey aquifer system in the upper part of the Maurice River Basin, N.J., provides fresh groundwater for a variety of uses. The study area encompasses southeastern Gloucester and Salem Counties, northern Cumberland County, and western Atlantic County. Three-dimensional steady-state and transient models of the Kirkwood-Cohansey aquifer system were developed to simulate groundwater flow in the study area for predevelopment conditions, post-development conditions, and future conditions based on groundwater withdrawal alternatives.

A comparison of predevelopment conditions with postdevelopment (1995-97) conditions using a transient simulation reveals considerable base-flow reduction in the headwaters area of Scotland Run as a result of withdrawals from nearby public-supply wells, especially during months of low recharge. Results of simulations indicate base-flow reduction was nearly 62 percent at Scotland Run near Williamstown, N.J. (01411460), in August 1995. Agricultural withdrawals in the Muddy Run Basin affected base flow at Muddy Run at Centerton, N.J. (01411700), reducing base flow by 38 percent during August 1995. Base-flow reduction near the southern boundary of the flow model, corresponding to the location of the streamflow-gaging station Maurice River at Norma, N.J. (01411500), was due to the combined effect of public-supply, commercial, industrial, agricultural, and low-volume institutional groundwater withdrawals in the Maurice River Basin. Base flow in the Maurice River at Norma, N.J. (01411500), decreased by nearly 26 percent during August 1995, between predevelopment and post-development conditions. Base flow was reduced by a comparable quantity at the same streamflow gaging stations during September 1996, even though higher recharge rates lead to higher base-flow values at this time of year.

A scenario representing maximum allocation groundwater-withdrawal conditions was simulated using all wells in the study area that had been issued a water allocation permit by 1997. Groundwater withdrawal rates from each well were set to the maximum monthly and annual rates specified by the permit. Results of this simulation indicated considerable reductions in base flow in the Maurice River, particularly during periods of low recharge. When climatic conditions that occurred during 1994-97 were used, results indicated that during a dry year like 1995, simulated base flow would stop at Scotland Run near Williamstown, N.J. (01411460), from June through September. Simulated base flow at Scotland Run at Franklinville, N.J. (01411462), and at Muddy Run at Centerton, N.J. (01411700), would stop during August 1995. A comparison of maximum-allocation conditions with predevelopment conditions indicated a reduction of simulated base flow by 93 percent during August 1995 and by 41 percent during September 1996 at Maurice River at Norma, N.J. (01411500).

Results of a simulation using additional withdrawals from three hypothetical public-supply wells demonstrated that locating the wells in the upper part of the Maurice River Basin affected the magnitude of base-flow reduction. When the wells were located adjacent to Scotland Run, there was nearly a one to-one correspondence between the amount of groundwater withdrawn and the amount of base-flow reduction in Scotland Run. When the wells were positioned on a surface-water basin divide between Scotland Run and Little Ease Run, groundwater withdrawals were offset by a reduction in base flow that was distributed between the two streams. 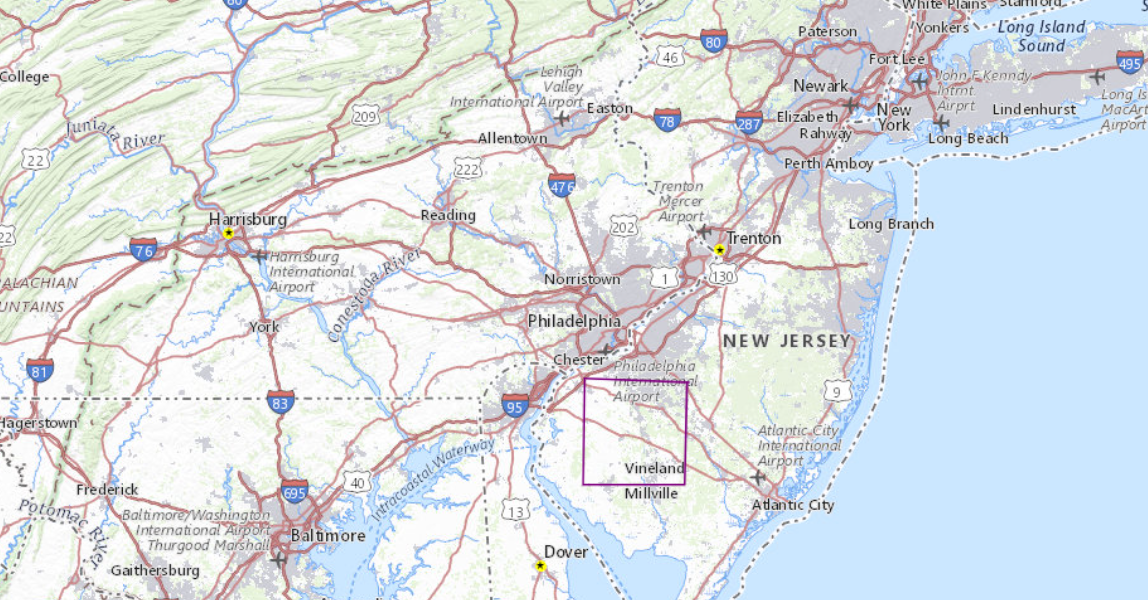