Impacts of Disease on Wolves in Yellowstone National Park Active

In 1995 and 1996, wolves were reintroduced into the Northern Rockies where they have since established and spread. Within Yellowstone National Park, one of the core protected release sites, the unmanaged population steadily increased to high densities, producing a large wolf population susceptible to infections such as canine parvovirus (CPV), canine distemper virus (CDV) and sarcoptic mange.

Much of the wolf research to date has focused on predator-prey interactions, population dynamics and social behavior. The USGS NOROCK effort, in collaboration with the Yellowstone Wolf Project, has been focused on assessing the impacts of disease on the wolf population.

Infectious disease in wildlife populations is often difficult to study for numerous reasons, such as inability to measure an infection through time, too short of a study duration to quantify dynamics, and unknown contact patterns that correlate with transmission events. The Yellowstone National Park (YNP) wolf population is an ideal subject for investigating the effects of social structure on disease. A rich, long-term data set (1995-present) and intensive disease monitoring provide an unparalleled research opportunity. In addition, disease may be a regulating factor in the YNP wolf population. 5 of the 6 years with population growth rates <1 are years with known infections in the population. In total, four major disease outbreaks, caused by two different pathogens, have caused large population declines  Although YNP wolves host a suite of pathogens, we have focused on canine distemper virus (CDV) and mange (Sarcoptes scabiei) because they are known to cause morbidity and mortality.

CDV (Canine morbillivirus) is an RNA virus related to measles. This generalist virus causes a wide range of symptoms, typically starting as an upper respiratory tract infection, and then moving to the gastrointestinal tract, urogenital tract, and eventually the central nervous system. CDV causes significant host mortality, specifically in pups, and induces life-long immunity. YNP wolves have experiences three major CDV outbreaks in the years 1999, 2005, and 2008 and resulting pup survival averaged ~28%. CDV also infects animals in the families Canidae, Felidae, Mustelidae, and Procyonidae. Thus outbreaks in wolves are correlated with outbreaks in other species.

In addition to acute CDV infections, YNP wolves also suffer from chronic Sarcoptic mange infections. Sarcoptes scabiei is a mite that burrows under the epidermis where it lays eggs and ingests host tissue. This causes an allergic, inflammatory reaction to which the wolves scratch and bite themselves, leading to hair loss, alopecia, and consequently heat loss and increased susceptibility to secondary infections. Sarcoptic mange entered the YNP wolf population in January 2007 and is now endemic. Nearly every wolf pack since the initial introduction has experienced a mange infection. 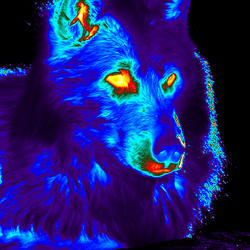 Researchers at NOROCK and their partners used thermal cameras at the Grizzly and Wolf Discovery Center in Montana to assess the amount of heat lost under a range of environmental conditions with and without hair. These methods help scientists better understand how mange operates in wild wolves throughout the Greater Yellowstone Ecosystem.
By
Ecosystems, Wildlife Program (unpublished), Northern Rocky Mountain Science Center
link
March 15, 2016

Researchers at NOROCK and their partners used thermal cameras at the Grizzly and Wolf Discovery Center in Montana to assess the amount of heat lost under a range of environmental conditions with and without hair. These methods help scientists better understand how mange operates in wild wolves throughout the Greater Yellowstone Ecosystem.
Learn More

Infectious diseases of wolves in Yellowstone

The summer of 2005 began with such promise for wolves in Yellowstone.  The population had been at an all-time high the last few years, and the wolves appeared to be in good condition.  Several packs had been particularly busy during the breeding season, and early summer pup counts suggested another healthy crop of new wolves rising through the ranks.
By
Ecosystems, Contaminant Biology, Environmental Health Program, Northern Rocky Mountain Science Center
March 31, 2016

Energetic costs of mange in wolves estimated from infrared thermography

Parasites, by definition, extract energy from their hosts and thus affect trophic and food web dynamics even when the parasite may have limited effects on host population size. We studied the energetic costs of mange (Sarcoptes scabiei) in wolves (Canis lupus) using thermal cameras to estimate heat losses associated with compromised insulation during the winter. We combined the field data of known
By
Ecosystems, Northern Rocky Mountain Science Center
July 1, 2015

Infection risk is assumed to increase with social group size, and thus be a cost of group living. We assess infection risk and costs with respect to group size using data from an epidemic of sarcoptic mange (Sarcoptes scabiei) among grey wolves (Canis lupus). We demonstrate that group size does not predict infection risk and that individual costs of infection, in terms of reduced survival, can be
By
Ecosystems, Contaminant Biology, Environmental Health Program, Northern Rocky Mountain Science Center
January 1, 2012

Wildlife reintroductions select or treat individuals for good health with the expectation that these individuals will fare better than infected animals. However, these individuals, new to their environment, may also be particularly susceptible to circulating infections and this may result in high morbidity and mortality, potentially jeopardizing the goals of recovery. Here, using the reintroductio
By
Ecosystems, Northern Rocky Mountain Science Center
January 1, 2010