When the wolf was listed as endangered, the last remaining mainland wolf population in the lower 48 states was in the Superior National Forest (SNF) of northeastern Minnesota. Since then, using radiocollaring and aerial tracking, we have studied the wolf population trend, factors influencing it, and prey species, white-tailed deer, moose, and beavers, affected by wolves.  During winter 2018-2019, we initiated a non-invasive winter wolf survey to determine if we could count resident wolves with reasonable precision using camera traps, genetics from scat and snow tracks, snow tracking, and citizen- scientist reports. During 2019, we commenced noninvasive summer research, along with international cooperators, studying wolf howling rates at their homesites compared across gradients of human impacts on landscapes. To interpret our wild howling results, we tested the efficacy of the recording device on captive wolves during spring 2019. Knowledge of changes in in this natural, protected wolf population provides insight valuable to State and Federal resource managers charged with managing recovered and recovering wolf populations. 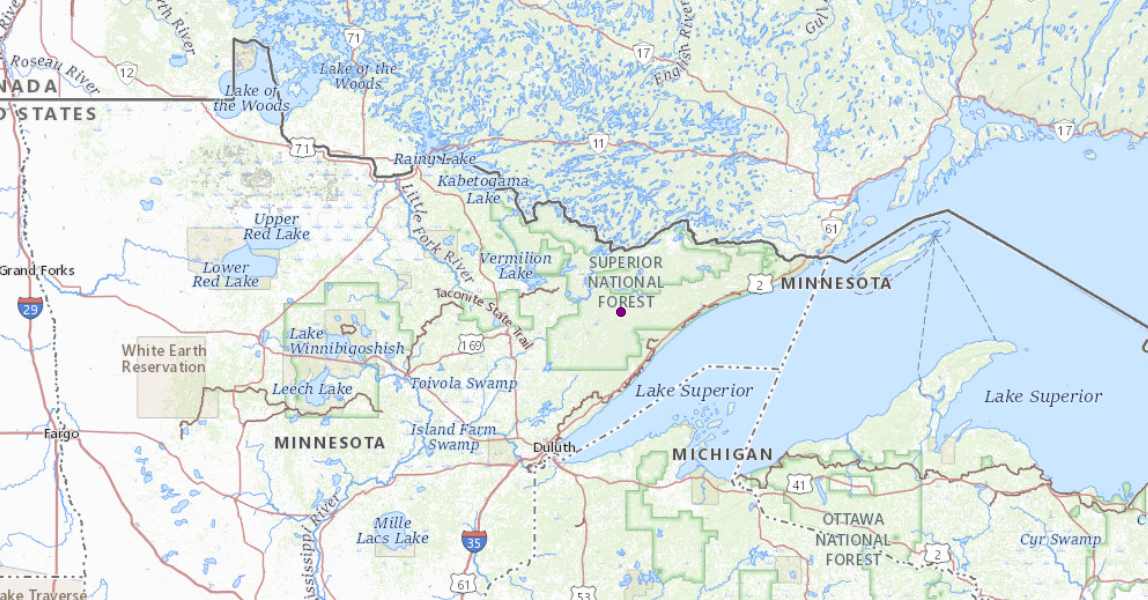 Historic beaver-sign (Castor canadensis) survey flights were often conducted over waterways to maximize beaver detections. However, densities determined from strip transect surveys are more useful to compare across and within study areas than waterway indices based on observations per distance flown because transects are more representative of the wider landscape. Yet, it is unknown if, and to wha
By
Ecosystems, Northern Prairie Wildlife Research Center
May 10, 2018

Use of non-invasive genetics to generate core-area population estimates of a threatened predator in the Superior National Forest, USA

Canada lynx (Lynx canadensis) are found in boreal forests of Canada and Alaska and range southward into the contiguous United States. Much less is understood about lynx in their southern range compared to northern populations. Because lynx are currently listed as threatened under the US Endangered Species Act but have recently been recommended for delisting, information on their southern populatio
By
Ecosystems, Northern Prairie Wildlife Research Center
February 2, 2018

Wolf (Canis lupus) and moose (Alces americanus) populations in northeastern Minnesota, USA, have fluctuated for decades and, based on helicopter counts, moose numbers declined to a new low from 2006 to about 2012. Other steep declines were found in 1991 and 1998 during periods when moose counts were done with ®xed-wing aircraft; these declines also appeared to be real. Winter wolf numbers, monitor
By
Ecosystems, Northern Prairie Wildlife Research Center
October 25, 2017

Where can wolves live and how can we live with them?

In the contiguous 48 United States, southern Canada, and in Europe, wolves (Canis lupus) have greatly increased and expanded their range during the past few decades.They are prolific, disperse long distances, readily recolonize new areas where humans allow them, and are difficult to control when populations become established.Because wolves originally lived nearly everywhere throughout North Ameri
By
Ecosystems, Northern Prairie Wildlife Research Center
June 14, 2017

Although Canis lupus L. (Gray Wolf) individuals are sometimes impaled by sticks, we could find no documentation of natural impalement by sticks as a cause of death for wild Wolves. Here we report on a wild Gray Wolf from northeastern Minnesota that died due to stick puncture of its thorax and abdomen.
By
Ecosystems, Northern Prairie Wildlife Research Center
May 12, 2017

Scientific interest in dog domestication and parallel evolution of dogs and humans (Wang et al. 2013) has increased recently (Freedman et al. 2014, Larson and Bradley 2014, Franz et al. 2016,), and various important conclusions have been drawn based on how long ago the calculations show dogs were domesticated from ancestral wolves (Canis lupus). Calculation of this duration is based on “the most c
By
Ecosystems, Northern Prairie Wildlife Research Center
February 24, 2017

This report, based on a symposium held on October 13, 2011, at the National Wildlife Visitor Center at the Patuxent Research Refuge in Laurel, MD, documents the history of the Patuxent Research Refuge and the Patuxent Wildlife Research Center, collectively known as Patuxent. The symposium was one of the many activities occurring at that time to celebrate the 75th anniversary of the creation of the
By
Ecosystems, Patuxent Wildlife Research Center, Chesapeake Bay Activities, Eastern Ecological Science Center
December 1, 2016

Moose (Alces americanus) in northeastern Minnesota have declined by 55% since 2006. Although the cause is unresolved, some studies have suggested that Gray Wolves (Canis lupus) contributed to the decline. After the Moose decline, wolves could either decline or switch prey. To determine which occurred in our study area, we compared winter wolf counts and summer diet before and after the Moose decli
By
Ecosystems, Northern Prairie Wildlife Research Center
August 19, 2016

Information is sparse about aspects of female wolf (Canis lupus) breeding in the wild, including age of first reproduction, mean age of primiparity, generation time, and proportion of each age that breeds in any given year. We studied these subjects in 86 wolves (113 captures) in the Superior National Forest (SNF), Minnesota (MN), during 1972–2013 where wolves were legally protected for most of th
By
Ecosystems, Northern Prairie Wildlife Research Center