The NWHC is interested in expanding into two realms that will improve our ability to predict and potentially prevent wildlife diseases. The first is to develop comprehensive risk assessments for common wildlife diseases based on national-level environmental variables that can be displayed and updated in real-time in the WHISPers data portal. The goal is for these spatial risk maps to provide forewarning of possible disease outbreaks so managers can take early or preventative actions. In addition, the NWHC wants to expand our predictive modeling tools to use “big data” to be able to map local-scale variation in disease risk factors to better target disease interventions.

NWHC scientists are continuing to improve diagnostic testing by applying new technology that allows for rapid screening of disease exposure and presence.  Through the USGS Innovation Center, the NWHC has teamed with a technology partner at the NASA Ames Research Center to develop inexpensive and disposable biosensors to detect agents of wildlife disease. The current prototype uses molecular biology reagents dried onto a piece of paper and microfluidics to amplify a nucleic acid target, which if present is detected by printed electrodes. The goal is to develop a cost-effective field-deployable test that can be customized, such as for screening incoming trade shipments for pathogens of concern. Additionally, the NWHC is currently using next-generation sequencing capabilities for novel pathogen discovery, but has interests in expanding this capability to quickly screen cases for likely causes of death.

The informatics and epidemiology teams at the NWHC are working with the USGS Web Informatics and Mapping (WIM) developers to reengineer WHISPers, a near real-time information portal for sharing wildlife disease events. The WHISPers portal will provide situational awareness for managers, as well as historical trends that can put ongoing situations into perspective. As part of this effort, the NWHC is working on integrating national-scale wildlife disease surveillance and databases, as well as expanding capability to share and display surveillance data within WHISPers. Future planned upgrades to WHISPers include smartphone data entry and upload, so managers in the field can quickly send information and photographs to epidemiologists at the NWHC and other wildlife disease colleagues.

As part of national surveillance for wildlife disease, the NWHC developed a web application to help management agencies optimize their surveillance design for chronic wasting disease in deer. The NWHC maintains the AMBLE portal and database (Avian Monitoring for Botulism Lakeshore Events), a citizen science reporting portal that is used by the National Park Service to monitor shoreline along the Great Lakes for disease outbreaks in birds. The NWHC is exploring expansion of the scope of this citizen science tool to include monitoring ocean shorelines to collate the observations of many volunteers across a broad geographic area.

The NWHC is actively developing interventions to wildlife diseases, ranging from best management practices to effective treatments. Through the ongoing creation of new statistical and mathematical tools, the NWHC is able to quickly evaluate potential management options to determine the best strategies for intervention. For example, ongoing work investigates the rate and density of vaccine coverage needed to protect prairie dogs from plague. The NWHC is continuing to develop models for the spread of chronic wasting disease to investigate the effectiveness of various management approaches. In addition, the NWHC is developing vaccines for the most harmful wildlife and zoonotic diseases, such as sylvatic plague in prairie dogs and black-footed ferrets, white-nose syndrome in bats, and bat-vectored rabies. The sylvatic plague vaccine is patented and conditionally licensed to a commercial company for widespread distribution on public lands - a major break-through for the conservation of endangered black-footed ferrets.

Below are other science projects associated with this topic. 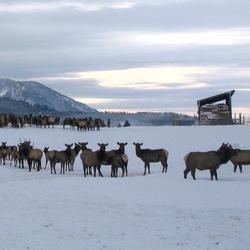 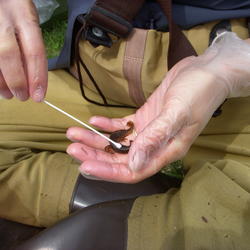 Scientists of the USGS National Wildlife Health Center (NWHC) in collaboration with partners have developed risk assessments for Batrachochytrium salamandrivorans (Bsal) in the United States and have begun sampling high-risk locations for the fungus.
Learn More
link

Below are data or web applications associated with this topic.