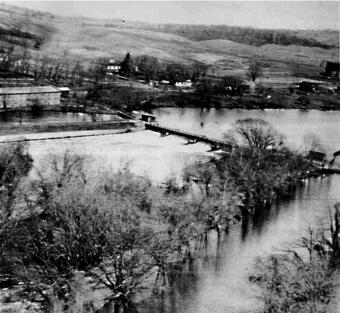 The Kalamazoo River is a Federal Superfund Site from the city of Kalamazoo to its mouth at Lake Michigan. Fluvial deposits from the Kalamazoo River contain elevated concentrations of polychlorinated biphenyls (PCBs) from paper mill carbonless copy paper production.

There are four dams on the Kalamazoo River between Plainwell and Allegan. Pool levels behind the dams were lowered in the late 1960s and again in 1987, exposing previously inundated sediment with elevated PCB concentrations. PCB-laden sediment continues to be transported and deposited downstream of each dam as a new channel is cut through the previously impounded sediments. Bank erosion in previously impounded sediments is also a source of PCBs. The effects of lowering pool levels and possible dam removal on erosion and sediment transport needs to be determined.

The primary objectives of the study were to: (1) determine historical geomorphic changes in the Kalamazoo River in a reach with two dams and PCB contamination from Plainwell to Otsego City, Michigan, (2) measure bank stability in the same reach, and (3) determine channel and bank stability in the same reach under possible scenarios of (a) current conditions with dams in place (b) catastrophic failure of the dams, (c) controlled removal of the dams combined with construction of a stable channel.

The approach for this study involved field data collection and modeling by the USGS offices in Michigan and Wisconsin, as well as the U.S. Department of Agriculture, Agricultural Research Service, Oxford Mississippi. The approach included: (1) conducting a literature review and describing the general watershed characteristics; (2) reviewing historical geomorphic data for the Kalamazoo River and determine if data are detailed enough to reconstruct pre-dam channel shape, substrate, and bed elevation; (3) quantifying the longitudinal profile of the Kalamazoo River from headwaters to its mouth (a) without dams, (b) with dams in full operation, and (c) with dam sills removed and identifying reaches with slope changes and investigate possible causes for changes (anthropogenic/dams versus geologic setting, historical relations with pre-glacial drainage); (4) determining channel planform/location for the Kalamazoo River from Kalamazoo/Calhoun County line to its mouth for the years 1827, 1938, 1960, and 2000; (5) evaluating digital representation of previously inundated surfaces for the Plainwell to Allegan reach of the Kalamazoo; (6) modeling bank stability under current conditions for the Plainwell to Trowbridge Dam reach; (7) conducting evaluation of channel stability under three scenarios for the Plainwell and possibly the Otsego City dam reach; and (8) writing a USGS Scientific Investigations Report.