Informed management of groundwater resources for the Eastern Shore of Virginia depends on the availability of detailed and up-to-date scientific information. The USGS and the Virginia Department of Environmental Quality are conducting a long-term cooperative study to enhance the understanding of groundwater resources in the sole-source aquifer system beneath Accomack and Northampton counties through mapping of subsurface hydrogeology, monitoring of groundwater quality and water levels, and developing a groundwater-flow model to update the model currently in use.

A multi-component effort to understand groundwater resources on the Eastern Shore.

This investigation's approach consists of four components: (1) mapping and revision of the hydrogeolgic framework; (2) construction of an updated groundwater flow model as a tool for assessing groundwater resources; (3) logging and mapping to better understand and define the subsurface saltwater interface; and (4) ongoing monitoring of groundwater levels in all aquifers.

Learn more about each component of the Eastern Shore groundwater resources research through the links below:

The Virginia Eastern Shore is entirely dependent on the underlying sole-source aquifer system, which provides at least 15 million gallons per day of groundwater withdrawn in Accomack and Northampton counties for public supply for about 45,000 residents and additional seasonal visitors, extensive agricultural irrigation, and a variety of industrial uses.

Fresh groundwater occurs in approximately the top few hundred feet of sediments on the Eastern Shore in several aquifers composed of relatively permeable sediments separated by less permeable fine-grained confining units. The Yorktown-Eastover aquifer system consists of upper, middle, and lower confined aquifers overlain by correspondingly named confining units and underlain by the Saint Marys confining unit. The Yorktown-Eastover aquifers are formed from medium- to coarse-grained sand and shells, while the confining units are formed from fine-grained sand, silt, and clay. An overlying, unconfined surficial aquifer is composed of sand and gravel with smaller amounts of cobbles and boulders. In addition, sediments that fill three buried paleochannels cutting across the Yorktown-Eastover system now have been explicitly delineated by McFarland and Beach (2019) as distinct hydrogeologic units. Two paleochannel aquifers are composed of medium- to coarse-grained fluvial sand and gravel, and an intervening paleochannel confining unit is composed of fine-grained estuarine sand, silt, clay, and organic material.

Groundwater withdrawals over approximately the past 100 years have lowered water levels, altered hydraulic gradients, and created concern about saltwater intrusion into fresh-water aquifers. Previous characterizations of groundwater conditions that are relied upon for management of groundwater resources have been limited by a lack of hydrogeologic information, particularly data on buried paleochannels that are critical to safeguarding the groundwater supply.

Several years of research by USGS and Virginia DEQ have resulted in a substantially enhanced understanding of the hydrogeologic framework of the Virginia Eastern Shore (McFarland and Beach, 2019), including much more detailed information about the configuration of the buried paleochannels. These paleochannels are thought to be important hydrogeologic features because they intersect the confined Yorktown-Eastover aquifer system and likely affect groundwater flow through that system. However, these important framework revisions are not represented in the model (Sanford and others, 2009) currently in use.

It has been recognized that the rate of groundwater withdrawals from the confined Eastern Shore aquifers may be approaching the limit for long-term, sustainable use. As a result, groundwater withdrawals currently are monitored and regulated by the Virginia Department of Environmental Quality. As part of the planning and regulatory process, the unconfined surficial aquifer has been identified as a likely additional source of water, because it appears that only a small fraction of water that enters the ground recharges the confined aquifer system. However, groundwater flow through the unconfined system was not the focus of previous groundwater modeling efforts, and additional model detail is needed to better represent the surficial aquifer.

The approach for this investigation consists of four components: (1) mapping and revision of the hydrogeolgic framework; (2) construction of an updated groundwater flow model as a tool for assessment of groundwater resources; (3) logging and mapping to better understand and define the subsurface saltwater interface; and (4) ongoing monitoring of groundwater levels in all aquifers (see Project Components at the top of this page for additional information).

Borehole-geophysical logging techniques will be used to provide additional information on the hydrogeology as well as aquifer salinity as part of the saltwater-interface mapping component of the investigation. Surface geophysics also will be applied to enhance the understanding of hydrogeology, particularly in proximity to the buried paleochannels.

mapping and revision of the hydrogeolgic framework; (2) construction of an updated groundwater flow model as a tool for assessment of groundwater resources; (3) logging and mapping to better understand and define the subsurface saltwater interface; and (4) ongoing monitoring of groundwater levels in all aquifers.

Physiographic provinces of Virginia and the location of the Virginia Eastern Shore study area.

Schematic cross-section of groundwater flow for the Eastern Shore of Virginia. 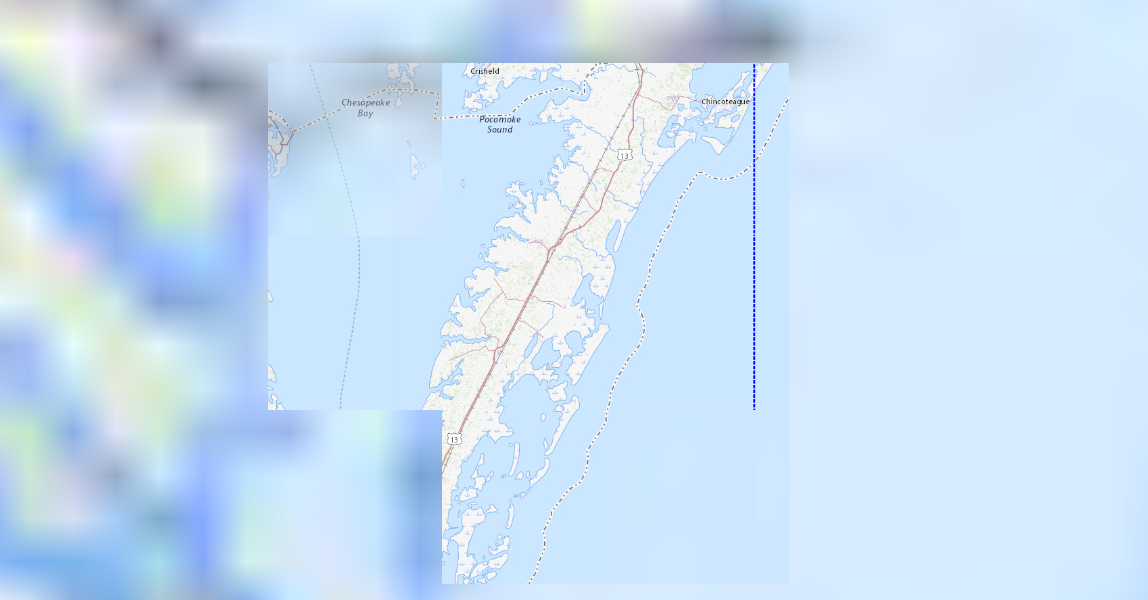 Below are data resources associated with this project. 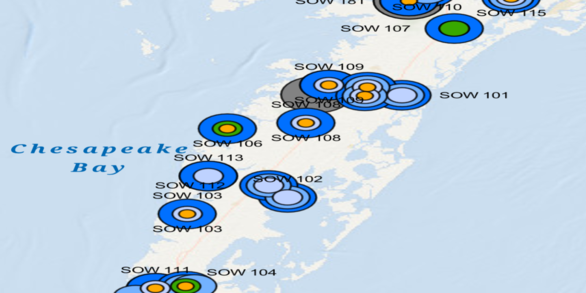 This interactive map shows the locations of real-time groundwater monitoring wells and provides access to data. 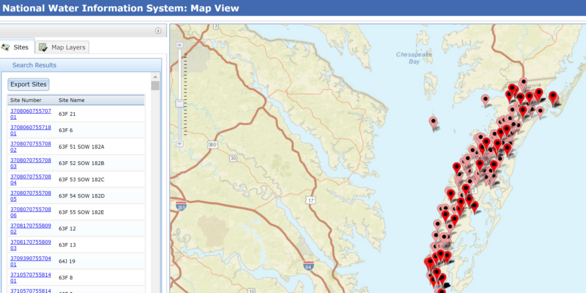 This topobathymetric digital elevation model (TBDEM) represents the topography and bathymetry for the Eastern Shore peninsula of Virginia, including Accomack and Northampton counties, and extending into Worcester and Somerset counties in Maryland. The TBDEM has a horizontal grid spacing of 1 meter and vertical units of 1 (integer) centimeter. This dataset combines U.S. Geological Survey (USGS) Ear
By
Virginia and West Virginia Water Science Center

The Yorktown-Eastover aquifer system of the Virginia Eastern Shore consists of upper, middle, and lower confined aquifers overlain by correspondingly named confining units and underlain by the Saint Marys confining unit. Miocene- to Pliocene-age marine-shelf sediments observed in 205 boreholes include medium- to coarse-grained sand and shells that compose the aquifers and fine-grained sand, silt,
By
Virginia and West Virginia Water Science Center
August 31, 2010

Groundwater-quality data and regional trends in the Virginia Coastal Plain, 1906-2007

Simulation of Groundwater-Level and Salinity Changes in the Eastern Shore, Virginia

Groundwater-level and salinity changes have been simulated with a groundwater model developed and calibrated for the Eastern Shore of Virginia. The Eastern Shore is the southern part of the Delmarva Peninsula that is occupied by Accomack and Northampton Counties in Virginia. Groundwater is the sole source of freshwater to the Eastern Shore, and demands for water have been increasing from domestic,
By
Water Resources, Virginia and West Virginia Water Science Center
March 6, 2008

Hydrogeology and analysis of the ground-water-flow system of the Eastern Shore, Virginia