The Science Issue and Relevance: Investigations of populations of individual species often require estimates of abundance or occurrence. These estimates may be used to monitor spatial or temporal changes in the population or to determine whether relationships exist between individuals and one or more environmental characteristics (e.g., to identify habitat). A common difficulty in these studies is that individuals which are available to be sampled often go undetected; thus, the number of individuals observed in a survey provides a negatively biased index of abundance. These biases are important because rates of detection can vary among collection times, locations, observers, and even among individual members of the population (say, owing to differences in animal behavior or coloration). Therefore, accounting for the effects of imperfect detection is crucial in the analysis of population survey data.

Methodology for Addressing the Issue: The focus of this research is to develop statistical models for the analysis of surveys of natural populations. A hierarchical approach is adopted wherein an observation model, which accounts for the sampling process and for imperfect detection, is augmented with a model of species occurrences or abundances. The latter component is generally tailored to exploit site-level covariates that are thought to be informative of species occurrence or abundance.

Future Steps: Hierarchical models have been developed for a variety of population-level surveys and sampling protocols, including presence-absence surveys, point-count surveys, multiple- observer surveys, removal surveys, and capture-recapture surveys. Surveys of unmarked individuals continue to pose challenges for analysis that motivate the development of new statistical models. Some particularly difficult examples include analysis of presence-only data, analysis of rare species surveyed  by adaptive-sampling protocols, and analysis of an invasive species during and after the initial  colonization of the species. 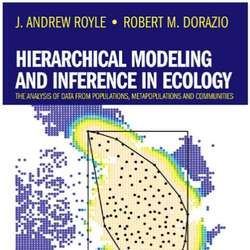 USGS is developing strategies to model species assemblages to allow inferences to be made about individual species, local communities of species, or for an entire metacommunity of species - while accounting for errors in species detection during sampling.
By
Ecosystems, Wetland and Aquatic Research Center
link
March 22, 2016

USGS is developing strategies to model species assemblages to allow inferences to be made about individual species, local communities of species, or for an entire metacommunity of species - while accounting for errors in species detection during sampling.
Learn More

Aim During the past decade ecologists have attempted to estimate the parameters of species distribution models by combining locations of species presence observed in opportunistic surveys with spatially referenced covariates of occurrence. Several statistical models have been proposed for the analysis of presence-only data, but these models have largely ignored the effects of imperfect detection a
By
Ecosystems, Wetland and Aquatic Research Center
May 22, 2014

Tailoring point counts for inference about avian density: dealing with nondetection and availability

Point counts are commonly used for bird surveys, but interpretation is ambiguous unless there is an accounting for the imperfect detection of individuals. We show how repeated point counts, supplemented by observation distances, can account for two aspects of the counting process: (1) detection of birds conditional on being available for observation and (2) the availability of birds for detection
By
Ecosystems, Wetland and Aquatic Research Center
October 15, 2013

In capture-recapture and mark-resight surveys, movements of individuals both within and between sampling periods can alter the susceptibility of individuals to detection over the region of sampling. In these circumstances spatially explicit capture-recapture (SECR) models, which incorporate the observed locations of individuals, allow population density and abundance to be estimated while accounti
By
Ecosystems, Wetland and Aquatic Research Center
August 30, 2013

Estimating abundance while accounting for rarity, correlated behavior, and other sources of variation in counts

The class of N-mixture models allows abundance to be estimated from repeated, point count surveys while adjusting for imperfect detection of individuals. We developed an extension of N-mixture models to account for two commonly observed phenomena in point count surveys: rarity and lack of independence induced by unmeasurable sources of variation in the detectability of individuals. Rarity increase
By
Ecosystems, Wetland and Aquatic Research Center
January 1, 2013

Several models have been developed to predict the geographic distribution of a species by combining measurements of covariates of occurrence at locations where the species is known to be present with measurements of the same covariates at other locations where species occurrence status (presence or absence) is unknown. In the absence of species detection errors, spatial point-process models and bi
By
Ecosystems, Wetland and Aquatic Research Center
January 1, 2013

A Gibbs sampler for Bayesian analysis of site-occupancy data

1. A Bayesian analysis of site-occupancy data containing covariates of species occurrence and species detection probabilities is usually completed using Markov chain Monte Carlo methods in conjunction with software programs that can implement those methods for any statistical model, not just site-occupancy models. Although these software programs are quite flexible, considerable experience is ofte
By
Ecosystems, Wetland and Aquatic Research Center
October 16, 2012

As part of the development of a management program for Nile crocodiles in Lake Nasser, Egypt, we used a dependent double-observer sampling protocol with multiple observers to compute estimates of population size. To analyze the data, we developed a hierarchical model that allowed us to assess variation in detection probabilities among observers and survey dates, as well as account for variation in
By
Ecosystems, Wetland and Aquatic Research Center
October 16, 2012

1. Occupancy estimation is a commonly used tool in ecological studies owing to the ease at which data can be collected and the large spatial extent that can be covered. One major obstacle to using an occupancy-based approach is the complications associated with designing and implementing an efficient survey. These logistical challenges become magnified when working with rare species when effort ca
By
Ecosystems, Wetland and Aquatic Research Center
April 16, 2012

Data augmentation (DA) is a flexible tool for analyzing closed and open population models of capture-recapture data, especially models which include sources of hetereogeneity among individuals. The essential concept underlying DA, as we use the term, is based on adding "observations" to create a dataset composed of a known number of individuals. This new (augmented) dataset, which includes the unk
By
Ecosystems, Eastern Ecological Science Center, Patuxent Wildlife Research Center