Researchers will collect location data that will be used to identify areas of high-use for resident sea turtles in the Florida Keys National Marine Sanctuary.

The Science Issue and Relevance: Habitat-use information is available for several species of threatened and endangered sea turtles in Gulf of Mexico waters, including areas within and adjacent to the Florida Keys National Marine Sanctuary (FKNMS). Such location-specific information is useful when defining and quantifying hotspots (i.e., areas of high sea turtle use/presence) to mitigate risk to sea turtles in various portions of the Sanctuary and in areas where U.S. Navy activities are planned.

A rich dataset of sea turtle tracks using both acoustic and satellite telemetry in several locations in South Florida, including FKNMS has been compiled. The database includes movement trajectories and location data for ~200 sea turtles tracked from 2008- present: including threatened loggerheads (Caretta caretta); endangered green turtles (Chelonia mydas), endangered hawksbills (Eretmochelys imbricata), and hybrid loggerhead x hawksbills. The database houses more than 42,000 turtle tracking days across all species, 24.0% of which were within the current boundaries of the FKNMS. This database of sea turtle locations offers a unique opportunity for visualizing sea turtle habitat-use patterns.

Methodology for Addressing the Issue: Sea turtles will be captured during in-water surveys. After capture, morphometric data (e.g., carapace length and width) and biological samples will be collected, and both satellite and acoustic tags will be affixed to the carapace. Sea turtles will then be released at the capture location. National Marine Fisheries Service permits have been obtained, and standard capture protocols will be followed. Captures and tagging is scheduled for the non-breeding season (fall, winter) to improve the chances of selecting resident turtles that may spend disproportionately more time in the areas of interest (as opposed to migrating turtles). Spatial data will be collected in two ways: 1) downloading satellite data; and 2) acquiring acoustic data from underwater receivers.

The analysis will assess the potential for and extent of interaction between U.S. Navy activities and turtle hotspots. Spatial data collected will be used to summarize information in the USGS database, such as history of captures and tracking, sea turtle movement, and sea turtle spatial use at 5km and 10km resolutions in and around the FKNMS.

Future Steps: The data collected from this project will help identify areas of high-use for resident sea turtles in the FKNMS and will be integrated into the USGS dataset that includes turtle tracking days across the Sanctuary and the Gulf of Mexico. The tracking data from this project has the potential to define year-round sea turtle “hotspots”. These hotspots can then be used by agencies, such as the U.S. Navy, to better plan marine activities and practices in a manner that reduces negative effects on sea turtles. Hotspot data can also be used by other regulatory agencies in deciding management practices, permit regulation requirements, and defining use zones within the sanctuary. Data from this work could be incorporated into peer-reviewed publications relating to the topics of sea turtle hotspots and areas of sea turtle interest in the Florida Keys. 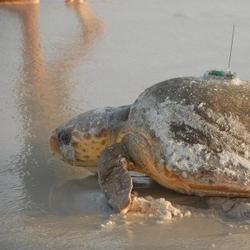 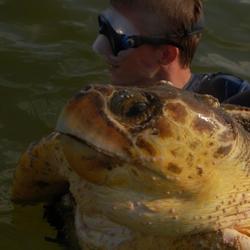 The over-arching goal of GoMMAPPS is to collect broad-scale survey data for seabirds, marine mammals and sea turtles to determine distribution and abundance in the Gulf of Mexico.
By
Ecosystems, Energy & Wildlife, Wetland and Aquatic Research Center
link
August 3, 2018