WARC researchers are performing visual encounter surveys and passively capturing Cuban treefrogs to remove as many of the invasive anurans as possible.

The Science Issue and Relevance: Cuban treefrogs are native to Cuba, the Bahamas, and the Cayman Islands, but have been established as an invasive species in Florida for decades. They are often transported in horticultural shipments to areas well outside of Florida. As with many invasive species, Cuban treefrogs negatively impact native wildlife, and lower abundances of native treefrogs have been observed in areas colonized by Cuban treefrogs. This is possibly a result of a much greater fecundity by Cuban treefrogs, as well as competition for shared resources such as refugia and prey. Though lone individuals have shown up all over North America, we documented the first known established population in the United States outside of Florida in 2017 in New Orleans, Louisiana. Shortly after, we discovered a second population about 20 miles away in St. Rose, Louisiana. Since these discoveries, Cuban treefrogs have seemingly established in coastal areas of Georgia. This extremely mobile species, aided by human transportation, will continue to expand its range and have negative impacts on local ecosystems. Early detection and rapid response may be warranted to limit the spread of this species.

Methodology for Addressing the Issue: Since the discovery of the established population in New Orleans, we have performed visual encounter surveys to remove as many individuals as possible on a near monthly basis. We have also begun using polyvinylchloride pipes (PVC) to passively capture frogs, aiding our removal efforts. The frogs use the pipes as refugia, and can enter and exit freely, but their habitual use of the pipes allows us to easily remove many individuals. We conduct less frequent visual encounter surveys for the St. Rose population, removing all Cuban treefrogs observed there as well. All removed Cuban treefrogs are humanely euthanized and preserved for use in related studies.

We have installed three automated recording units at the New Orleans site to record frog and toad vocalizations. This will help us better understand Cuban treefrog breeding phenology, the impacts this species has on native frogs and toads, and the effectiveness of our removal efforts. To monitor the spread of Cuban treefrogs into other areas along the Gulf Coast, we have installed automated recording units at two other protected areas with a possibility of Cuban treefrog establishment, Jean Lafitte National Historic Park and Preserve in southeast Louisiana and the Naval Live Oaks Tract of Gulf Islands National Seashore near Pensacola, Florida. Automated recording units give us a more complete assessment of frog and toad vocalizations in these areas, as they record audio nightly without the need for us to be present, except to periodically swap out memory cards and batteries.

Future Steps: We will continue monitoring and removal efforts for both Louisiana Cuban treefrog populations to gain a better understanding of this novel establishment and the impacts to native frogs and toads, as well as control further spread. 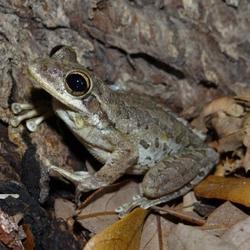 The Cuban treefrog, Osteopilus septentrionalis, is native to Cuba, the Bahamas, and the Cayman Islands, and is invasive in areas where it has been introduced and established in the Caribbean as well as Florida. Despite repeated occurrences in several states over many years, it was not believed that Cuban treefrogs had successfully established outside of Florida in the mainland United States. From
By
Ecosystems, Wetland and Aquatic Research Center
March 1, 2018

USA: LOUISIANA: St. Tammany Parish: on private property on Allen Road in Slidell (ca. 30.262°N, 89.741°W; WGS 84). 2 April 2013. Aaron Steece. Verified by Hardin Waddle. Florida Museum of Natural History (UF 177727, photo voucher). New parish record. This adult was found ca. 2 m high on a branch at the edge of a wooded area behind a house. It was photographed and released, as the species identity
By
Ecosystems, Wetland and Aquatic Research Center