The maculata apple snail (Pomacea maculata) has invaded many coastal and some inland areas in south Louisiana. Reports have indicated that the freshwater snails have significantly reduced the amount of submerged aquatic vegetation (SAV) and floating leaved vegetation (FLV) available for waterfowl and other wildlife.

The Science Issue and Relevance: The maculata apple snail (Pomacea maculata) has invaded many coastal and some inland areas in south Louisiana. Reports have indicated that the freshwater snails have significantly reduced the amount of submerged aquatic vegetation (SAV) and floating leaved vegetation (FLV) available for waterfowl and other wildlife. There is also evidence that native predators such as alligators and raccoons are preying on the snails (Figure 1). Apple snail egg masses are easily visible because of their bright pink color and because they are deposited on objects sticking out of the water. Each female can lay an egg mass any time during the year provided the weather conditions are suitable. Their egg masses contain between 800 and 2,000 eggs, and during the most active months (summer) they may lay an egg mass every 4 - 7 days. Thus, a single female could produce more than 52,000 eggs from the beginning of April to the end of September; one hundred females could produce over 5 million eggs. Oftentimes, egg masses do not hatch out completely or are lost to flooding, but the high number of eggs in each clutch ensures that the ecosystem is flooded with apple snail hatchlings. Many animals are known to feed on the snails at every stage of their life history; however, the apple snail’s reproductive effort overwhelms the predators’ abilities to impact the population. A recent USGS-led study in Mobile, Alabama, demonstrated that spraying apple snail egg masses with coconut oil or PAM cooking spray reduced hatch success by as much as 80%. In this study, we will test the idea that a concerted egg mass reduction effort will allow the predator community to “catch up” and reduce the apple snail population and their impact on SAV and FLV. Our study objective is to develop and test protocols for apple snail egg mass suppression using a combination of physical destruction and sprayed on food oil. The study will occur in Mandalay National Wildlife Refuge near Houma, Louisiana, which has a confirmed population of apple snails and impacts to aquatic vegetation.

Methodology for Addressing the Issue: Due to accessibility issues we will be working in keyhole cuts of dredged canals intersecting Refuge property (Figure 2). Three sites at keyhole cuts will receive eradication treatments that will be compared with two similar keyhole sites without treatment. Weekly egg mass suppression will occur at treated sites for two to three months. At the start and end of the experiment, we will measure: 1) the SAV and FLV community’s species richness and dominance to determine the egg mass suppression’s impact on aquatic vegetation; 2) egg mass counts to monitor snail reproductive output; and 3) apple snail population density as a measure of adult recruitment Figure 3.

Future Steps: The field work component for this project should conclude by October 2017. Analysis and write up will conclude by March 2018. Depending on the results of this study, a follow-up study will be conducted to refine the techniques and protocols developed to provide guidance for managers on apple snail mitigation. 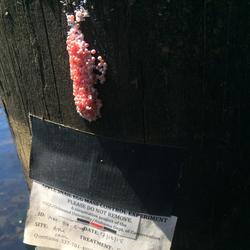 Maculata applesnails (Pomacea maculata) are exotic freshwater snails that have been widely introduced along the Gulf of Mexico coast. The snails can significantly impact freshwater macrophytes and reduce the quality of water bodies.
Learn More
link 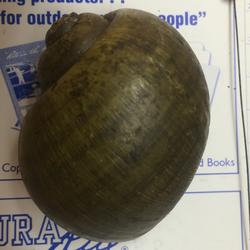 Maculata applesnails (Pomacea maculata) are exotic freshwater snails that have been widely introduced along the Gulf of Mexico coast. They can significantly impact freshwater macrophytes and reduce water quality.
Learn More

This report provides an overview of the pilot study and description of the techniques developed for a future mitigation study of Pomacea maculata (giant applesnail) at the U.S. Fish and Wildlife Service Mandalay National Wildlife Refuge, Louisiana (MNWR). Egg mass suppression is a potential strategy for the mitigation of the invasive giant applesnail. In previous studies at Langan Municipal Park i
By
Ecosystems, Wetland and Aquatic Research Center