Mosquito control on Department of the Interior (DOI) managed lands is a resource management challenge. The pesticides used to control mosquitoes may also affect nontarget organisms whose conservation is one of the primary responsibilities of resource managers.

The Science Issue and Relevance: Mosquito control on Department of the Interior (DOI) managed lands is a resource management challenge. The pesticides used to control mosquitoes may also affect nontarget organisms whose conservation is one of the primary responsibilities of resource managers. This resource management problem is one of the major challenges for the Florida Keys National Wildlife Refuge complex. Pesticides targeting mosquitoes are applied throughout the Florida Keys including the Florida Keys National Wildlife Refuge. With the exception of some no-spray zones, pesticides are sprayed over the majority of the Refuge. Many of the organisms within the Refuge borders, including the imperiled Bartram’s hairstreak (Strymon acis bartrami) and sawgrass skipper (Euphyes pilatka klotsi) butterflies, are potentially exposed and at risk from the pesticides.

Knowing the relative toxicity of pesticides to mosquitoes and nontarget organisms would help the Refuge manage risk for butterflies.For example, if mosquitoes were more sensitive than butterflies to the pesticides, then the pesticide application rate could be adjusted to result in effects primarily to mosquitoes.Toxicity testing required by the U.S. Environmental Protection Agency during pesticide registration indicates that adult mosquito control pesticides are relatively nontoxic to terrestrial vertebrates compared to invertebrates, indicating that risk for nontarget organisms like the key deer is low during mosquito control operations. However, the same required testing indicated that both permethrin and naled are highly toxic to terrestrial invertebrates, which would include both mosquitoes and butterflies. This suggests that butterflies on the Refuge may be at risk during mosquito control operations. No studies were found in the literature that compared the toxicity of those pesticides to adult mosquitoes and other nontarget invertebrates. As a result, it is unknown if adjusting the application rates could manage the risk for terrestrial invertebrates like the imperiled butterflies relative to mosquitoes.

Methodology for Addressing the Issue: Initially, we will determine the relative sensitivity of mosquitoes and butterflies to pesticides used for the control of adult mosquitoes. This will be done through toxicity testing of these insecticides to multiple surrogate butterfly species and adult mosquitoes.

Future Steps: We anticipate following this project with studies evaluating relative exposure of mosquitoes and butterflies. When combined with data from the proposed study, we will have a better understanding of the risk of adult mosquito control for butterflies. 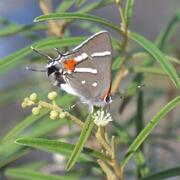 USGS researchers evaluate the impact of a pesticide on two imperiled butterfly species in the Florida Keys.
Learn More